LAS VEGAS – The first day of the annual Cauliflower Alley Club is always abuzz with who is going to be at the reunion, and unfortunately, who can’t make it.

With such a wide range of ex-wrestlers in attendance, it’s almost like a famous Las Vegas buffet — there’s someone for everyone. 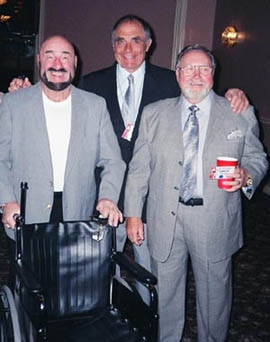 From a fan’s perspective, just sitting and watching as the various stars arrive into the convention room, it’s quite magical:

Ocala, Florida’s Mark Nulty, who runs the WrestlingClassics.com site, is here to peddle some merchandise, but also to honor those that are here. “Who am I not excited about seeing? Every year is just a thrill to see the people who created the legacy of wrestling.” On a personal level, his childhood hero is the great lightheavyweight Danny Hodge, who is expected here this weekend.

Warren Edge from Victoria, B.C., is attending his first CAC reunion. He’s a regular poster on the wrestling boards like KayfabeMemories.com and it was his wife that basically egged him on to go, to meet fellow posters from the boards and some old faves as well. “I’m looking forward to meeting Nick Bockwinkel,” he said, adding that Bockwinkel is his wife’s favorite wrestler too. “I just want to enjoy the whole experience.”

Mick Karsh from Minneapolis has been a wrestling personality for years, usually as a TV commentator. He’s here to host Friday night’s informal Baloney Blowout dinner with fellow Midwesterner George Shire. A few people are on the top of Karsh’s list. “Billy Graham, if he’s here. I’m just a long time fan.” Another is Chyna (now known as Chyna Doll) and her beau X-Pac Sean Waltman, whom Karsh knew where he was breaking into the business in Minnesota, and whom he hopes to rekindle a friendship with.

Ed Wiskoski, aka Colonel DeBeers in the AWA, worked the Kansas City territory quite a bit over the years as ‘Easy’ Ed Wiskoski, and was disappointed last year when he missed out on meeting an old mentor in Bob Orton Sr., who was only at the convention briefly. This year, he didn’t miss out on talking with Bob Sr., and his son Barry. As well, Bob Orton Jr. is expected here, and the convention is abuzz with the possibility of Randy Orton coming by too for a quick in and out before the WWE Backlash pay-per-view Sunday in Edmonton where he faces Mick Foley.

In fact, who (if anyone) the WWE sends to the event is always a topic of conversation. It’s understandable that the current grapplers have a star appeal, but it works the other way too. Kurt Angle and Chris Benoit will both rave about their time at CAC reunions in the past, and WWE backstage guru Pat Patterson is on the CAC’s Board of Directors.

The very nature of 650+ people coming to a convention means that some people will have last minute cancellations. Superstar Graham, for example, is not 100%, nor is Ricky Steamboat who has a last-minute conflict with his son’s racing competition. Other regulars like Harley Race and Killer Kowalksi aren’t here because of their own health reasons.

The Canadian contingent isn’t as large as in the past, but Bruce and Ross Hart were glued to the TV last night as the Flames downed the Canucks, and ex-Hamiltonian Bruce Swayze suffered as his adopted Nashville Predators fell to the Red Wings.

Former Stampede Wrestling promoter and photographer Bob Leonard and his wife Winnie drove down to Vegas from their home in Regina, Saskatchewan. This is their fourth CAC event, and Leonard enjoys holding court with old friends, whether it’s in the banquet room or in the bar later in the evening. “I just love seeing the people I knew years ago,” he said, adding that the reunion is “like a magnet. Once you’re hooked on it, you’re hooked on it.”