When Smackdown! Here Comes the Pain (or as it will be titled for the remainder of this review, SD5) was announced, I have to admit I was a bit skeptical. After playing Shut Your Mouth (ie. SD4) for nearly half a year and not being completely finished all the objectives in that game, moving on to my second PS2 WWE game was a bit of a struggle. Therefore, this game, as it likely should be, will be judged against its predecessor.

There are literally one thousand-and-one aspects to this game (okay maybe I’m exaggerating … maybe), so let’s break it down by the various aspects of the game, starting with the most important …

For most video grapplers, this is the section they will head straight to when they first crack open this game.

SD5 has put together a pretty solid create-a-wrestler line-up, with an extensive array of attire and body/facial features. As always, it’s near impossible to not be able to create a character, as everything from masks to tattoos to intricate designs can be made very easily. While the organization of the options will take a little bit of time to navigate, the rewards are definitely sweet.

One of the parts of SD5’s create-a-wrestler mode that must be applauded is the increase in the body morphing technology. Previously, body sizing was hit and miss as each part had to be adjusted individually. Now, however, you can adjust your wrestler’s body build in one fell swoop. This is a much welcome change in the game.

SD5 takes what already a very advanced create-a-wrestler engine in SD4 and shoots it light-years beyond. Good stuff here.

You might as well forget everything you knew about the PS2 WWE game controls, because they have been almost completely revamped. Whereas in the past you were able to complete a move instantly based on your opponent’s state (standing full, groggy, etc.), you now must grapple your opponent in one of four manners to open the way to one of four move blocks. Each block has four different move possibilities, plus an Irish Whip or strike option. This new format is reminiscent, of course, of the old THQ/AKI format. The instant-move, however, is still in use in back grappling, and Irish whips.

While die-hard PS2 gamers will have a few goes at the new format before they get used to it, the new format does increase the frontal moveset by four, which is over-all pretty good. But for some wrestlers, even the 12 moves in SD4 was a stretch. Overall, however, the controls get thumbs up for further advancing the options the game. 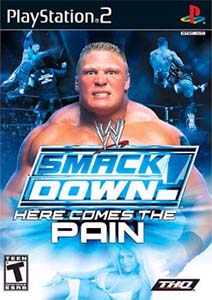 The big thing here, whether you are playing in season mode or exhibition, is that the way you play the game has made the shift from ground-and-pound to technical wizardry. Here, you are shown where your moves are inflicting pain on your opponent, whether it is the head, torso, arms or legs. This makes submission moves and body-part specific moves such as a dragon-screw or brainbuster all that more valuable.

The season mode has also changed, especially for create-a-wrestler freaks. Now, you increase your create-a-wrestler’s abilities by winning season matches, as well as boosting their rankings and earning money. That money is used in the Shopzone to purchase locked wrestlers, costumes, pre-made movesets and arenas. The backstage scenes have also become more integral to the game, as interactions with characters help you get matches on the show, as well as affecting your ranking and attribute point level.

The array of exhibition matches has also improved with the heavily promoted Elimination Chamber match. It really is a great addition, as is the return of the First Blood match. As for the bra-and-panties match, well, that could’ve been avoided.

The biggest thing here is that the announce team is gone, as is the pre-match introductions. These were, for the most part, annoying, so it’s no big loss. The match sounds themselves have greatly improved and are more realistic.

The graphics have not changed a lot, but the overall working of the game has improved. Character and environment interaction has greatly improved.

The biggest difference between SD5 and SD4 is in the action. If you’re a fan of smash-mouth pain games, SD5 isn’t your game. Matches in this game are much longer and more psychology minded, and for this reviewer at least, it’s a welcome change.

This is at least a rental or two, but chances are you will end up wanting to pick up the game.