Missy Hyatt? Who’s Missy Hyatt? Those were the thoughts that popped in my head after seeing Missy Hyatt: First Lady of Wrestling, another in a long line of wrestling biographies. 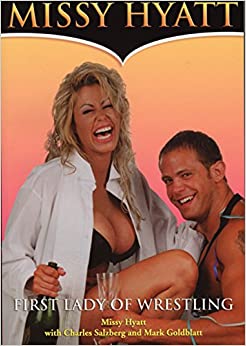 To be honest, Hyatt (real name Melissa Hiatt) is not a very well known valet in wrestling here in Canada mainly because she hasn’t been associated with the WWF as much as others like Sable or Miss Elizabeth have. During Hyatt’s “big run” in World Championship Wrestling (WCW) in the ’80s, the federation had a very limited reach here in Canada.

Having said that, I was curious to find out more about her and what she had to say about her experiences with different wrestling organizations. She has been involved with smaller organizations like WCCW, UWF, USWA, CWF, AWF to bigger names like ECW, WCW, and for a short period, the WWF.

Hyatt admits there is no consistent timeline as to the way stories are assembled together in this book. Because of that you can read the book as a collection of short stories based on Hyatt’s life inside and outside of the wrestling circle. The book was written by Hyatt herself, (with Charles Salzberg and Mark Goldblatt) which makes the reader get a better vibe of what she is like in person.

One of the strong points that comes across in the book is Hyatt’s honesty. She doesn’t hold back in discussing her affairs with many men that she met during her 16-year, on-and-off career in wrestling. And I’m not talking about just wrestlers, some of the names mentioned in the book are major sports stars and entertainers like Rod Brind’Amour, Jim Kelly and Jason Harvey (The Wonder Years).

She also goes into detail about how she got hired and fired from both ECW and WCW. She has some rather harsh words for Eric Bischoff. On the other hand, she has only good things to say about the McMahon family and how she was treated nicely by WWF for the short time that she was with them.

The book does come with some interesting pictures, which show Hyatt from her early ages to her more recent years. I wish more of them were in colour though.

Though the book is rather honest and interesting in that aspect, there is no reference whatsoever to her adult web project that she’s been recently involved with along with Sunny and some other former wrestling valets.

After reading about Hyatt, I got a feeling that I missed out on one of the wrestling characters that would be fun to watch on TV, perhaps on RAW or Smackdown, and I’m sure in her mind, Hyatt would love to be part of the game, the only game in town right now, the WWF.