The Ultimate Fighting Championship has sometimes been referred to as the ugly cousin to professional wrestling. Detractors of the UFC consider it too violent, with real punches and kicks being thrown, as opposed to the simulated violence in a wrestling ring. Even wrestling fans have generally shied away from the UFC, preferring characters with specialty moves and gimmicks over the traditional martial-arts, shoot style which drives ultimate fighting. 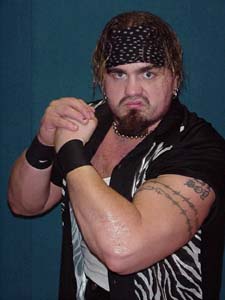 However, there have been some notable cross-over stars, guys who have come from the ranks of the UFC and had successful pro wrestling careers, the most notable examples being Ken Shamrock, Tank Abbott, and Dan Severn.

Currently, another former UFC competitor is making his name known on the Canadian independent wrestling scene. Geza ‘Big Dawg’ Kalman Jr. was involved in no-holds barred fighting for close to three years before heading to the squared circle. He recently sat down with SLAM! Wrestling at last month’s Border City Wrestling debut show in Barrie, to discuss his UFC stint and his current career in sports entertainment.

Unlike most of the UFC roster, the Cambridge, Ontario-born Kalman never had any formal martial arts training. “I actually trained as a pro wrestler first. I was training at [Dean] Malenko’s school, and my roommate was taking shoot-wrestling classes there on Sundays. Sometimes I’d stick around and practice moves with him. That was my real introduction to the shoot wrestling stuff.”

After finishing his training, Kalman worked for various promotions, mainly in Ohio and Michigan, the home-state of Dan Severn. “I did a show, and Dan had just finished UFC 4. I knew he needed someone to train with, I’d heared that he had no training partner. I called him up, hooked up with him, and trained with him for two years.” Still, Kalman wasn’t sure that the UFC was the career path for him.

“My only intention at the time was to learn a few shoot moves to incorporate into my street-kid gimmick at the time.” Five months after starting training with Severn, he was offered a chance to fight on a UFC show. “They said that they’d pay, and I said that I’d do it.”

During his time in the UFC, ‘Big Dawg’ achieved a 50% win-loss record, one he’s proud of, considering his lack of formal training, either in martial arts or boxing, the cornerstones of the sport. He left after ten fights, having just grown tired of it, and went back to wrestling. 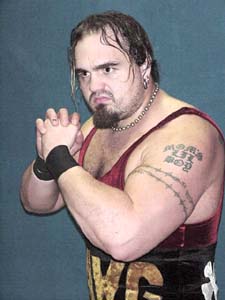 “The transition was tough at the time. The UFC was nowhere near as popular back then as it is now. No-one wanted to book you because you were a shooter, and normally when you’re a shooter, you can’t work, or you work too stiff. So only people who knew I had a background from Malenko’s would book me.”

However, when other former UFC stars became household names in pro wrestling, Kalman saw his background turn into an advantage. “Bookers want me now because of that credential, that reputation. It’s a legitimate sport, people can research it, and it becomes a draw. As a bonus, if they do book me, they can see that I can work, and I’m not just a shooter.”

When discussing his goals in wrestling, the 6’0″, 267-pound Kalman is optimistic yet realistic given the environment of the industry. “At first, it was like everyone else. You want to be on TV full-time, want to make the big money. Right now, I don’t think it’s possible to have big goals in the independents right now. Moving to the WWF isn’t possible right now, they’re too full. People say, go to Japan. Well, all the guys who didn’t make it into New York, they’re all in Japan right now. There’s just no room to go anywhere.”

“Long term, I hope to still be young enough that when the doors do open up, I can get in there.”

Of course, if things don’t work out, Kalman is always open to the possibility of going back to the UFC. “It would take me about six months to get back into shape. They’ve changed it a bit, adding rounds, so there’s a lot of stand-up fighting to it now which I don’t do. I think, with the evolution of the sport, there’s a lot of room for crossing over the other way. It’s adding characters now and personalities, it’s not only about the fighting skill. It’s a lot like wrestling now, so I think I could go back if I wanted.

“But for now, I just want to have fun and enjoy myself. Ontario has been good to me, but I would like to get out and wrestle across Canada. There are a lot of promotions I’d like to check out.”