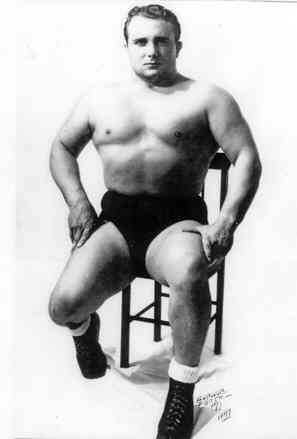 Steve Kozak came to Canada with his parents from the Ukraine who settled on a farm near Brandon, Manitoba, when he was 10 years old. A few years later, he and his father moved to Winnipeg where he was to reside for many years.

He began visiting the Central Y.M.C.A. and often watched amateur wrestlers work out in the gymnasium. He developed an interest in the sport and began participating, starting at the welterweight level up to the heavyweight division over a period of years, winning the Canadian Amateur Championships in all those weight classes.

Kozak decided to turn professional in the mid-1940s, wrestling out of Winnipeg and going on the road to Minneapolis, Chicago and Duluth in the next few years. He was 5′ 6″ tall and weighed 215 pounds, making him a junior heavyweight. What he lacked in height was made up by strength and wrestling ability, that served him in good stead against many opponents he faced in the ring. As he built up a winning record he became known as Canada’s ” Little Giant” Steve Kozak.

In 1946 Steve was matched against a wrestler with a reputation of being able to slip out of any hold and being a master of one thousand of them himself and billed as Tommy “The Colorado Comet” Bradley. According to the local press, Kozak was definitely overmatched, but the outcome of the battle was that he won and put “The Comet” out of action for six weeks.

In one of toughest and roughest and bloodiest matches on promoter Alex Turk’s wrestling cards witnessed in a wrestling ring in Winnipeg, Steve Kozak defeated a long time villain Abe “King Kong” Kashey. 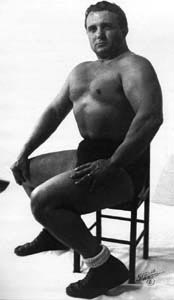 These two victories were definitely stepping stones for Kozak to get a shot at a championship match against Ken Fenelon of Dubuque, Iowa, the reigning Junior Heavyweight Champion of the World (sometimes spelled Fenalon).

Kozak was holding his own in the first meeting with the champion in the latter part of 1946, but had the misfortune of contacting a ring post with his head during the match that left him stunned and unable to get his shoulders off the mat before the count of three. He gave Fenelon a good struggle so it was inevitable that a rematch would take place with the two grapplers.

On March 20, 1947, Kozak met Fenelon at the Winnipeg Auditorium for the second time. Both men applied numerous holds and counter holds on each other in front of four thousand, five hundred wrestling fans. The match lasted fifty one minutes and the end came when Kozak applied his favorite hold – a flying headlock. Three times in a row he sent Fenelon to the canvas with hard body slams. After the third slam Kozak straddled Fenelon and put his shoulders to the mat for the three count by referee Wally Karbo. The roar of the home town crowd in the auditorium was deafening as Kozak’s arm was raised by the ref in victory. Steve Kozak was the new Junior Heavyweight Champion of the World!

A third and final match took place between Kozak and Fenelon six months later at the Winnipeg Amphitheatre. The guest referee brought in for the contest by promoter Alex Turk was Jack Dempsey. Before a packed house of 6,000 spectators, Kozak retained the title by disposing of the former champ a second time in 31 minutes.

Another significant victory for Kozak was when he beat Ray Steele, a former champion. 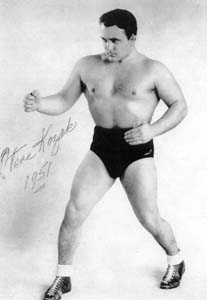 Kozak carried a bitter feud in and out of the ring with a great wrestler from Minneapolis — Joe Pazandak. Over the years they met on five occasions. Pazandak was a full-fledged heavyweight weighing 235 pounds and roughly the same height as Kozak. All their matches were grueling affairs with the outcome being two wins for Pazandak, one win for Kozak with one draw and one no contest.

Kozak challenged the Heavyweight Champion of the World, Sandor Szabo, and almost made wrestling history in a match that took place in Winnipeg in the latter part of 1948. Around the 20 minute mark, Kozak placed a headlock on Szabo and took him down for a two count. Szabo broke free but was caught in a second flying headlock and slammed to the mat for a two count once again. As Szabo freed himself once more, Kozak lunged towards him across the ring in a attempt to slap on another headlock. Szabo sidestepped him and wrapped his arms around Steve’s waist, spun him around and flipped him backwards headfirst into the mat with such force that Kozak was knocked out immediately and one of his collarbones fractured.

Kozak was sidelined over three months with the injury and was never back to the same form for the remainder of his career that went on for another nine years. He had roughly two hundred matches and lost only four. He was mentioned twice in the Ring Magazine and was known internationally.

Kozak always believed that honesty was the best policy and he insisted and boasted that he never engaged in a fixed match. If you wanted to see a straight shooting match, you went to see Kozak wrestle.

Steve Kozak lived most of his life in Winnipeg. Following his retirement from wrestling both he and his lovely wife Hazel moved to British Columbia. He passed away in Vancouver at the age of 59.

This biography was written by Russell Luch, and prepared by Walter N. Williams. Thanks to both of them.