Lou Newman always put his ‘Shoulders’ into it 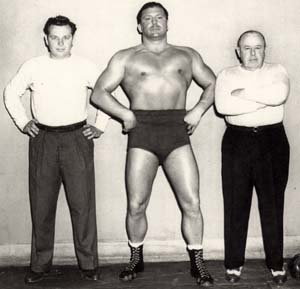 Lou Newman, centre, in Wichita, KS in 1948 with some seconds. 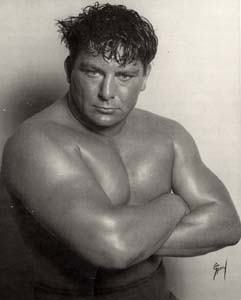 Wrestling was a part of Lou Newman’s life from an early age. His uncle, Vaino Ketonen was a wrestler and as a youngster, he would travel to Victoria, B.C. where he was used as a second by the promotion, carrying ring jackets and bringing water between rounds.

He would pepper the wrestlers with questions, and eventually decided that he wanted to do it too. While wrestling as an amateur, the Saanichton, B.C.-born Reino Nyman (a Finnish name, anglicized to Newman; Lou was a nickname) would fight on tiny shows in a vacant lot in Victoria, getting $5 for the matches in the early 1930s.

“They’d set up in a vacant lot under a tree and charge a quarter or so to get in. About fifty to a hundred people would come. They were awful stiff working, but I was too. I got a little experience, which is what I wanted,” Newman explained to Scott Teal in in a wonderful interview in the Whatever Happened to…? newsletter (Issue #41/August 1999).

Newman turned pro in 1937 after a successful four-year stint as an amateur. His career took him around the globe until he got out in 1967. He died from a stroke in March 2001 in Bellingham, WA, where he lived with his second wife, Shirley.

“He certainly had an interesting life, wrestling all across Canada, all over the U.S., Australia, New Zealand, South Africa, and two tours of Japan,” Shirley Newman said. The two met at her first ever wrestling match, when she was 16 and he was 33. “Of course, he had no idea how young I was, being in the company of an older group. He asked me out for the following weekend. We were married on August 20, 1948 at Butte, Montana and the reception was hosted by Lord Albert Mills.” It was Newman’s second marriage.

A week after attending the February 2000 Cauliflower Alley Club reunion in Las Vegas 2000, Newman had his first “little” stroke after he returned to Bellingham. According to his widow, who is a retired nurse, Newman recovered rapidly, and did fairly well all year, and worked out just one week before he died. “He stayed in shape, and was a good looking older man, all his life,” said Shirley Newman.

He was always concerned with his health. “He always watched what he ate, and he loved to cook,” said Shirley. “He took a lot of vitamins and his belief was in ‘the natural way.’ …. He insisted on ‘the natural way’ despite my pleadings.”

Lou Newman was nicknamed ‘Shoulders’ for his muscular physique and tremendous upper-body development. In his interview with Teal, Newman said that the nickname was given to him by Orville Brown “We were working in the ring and he said, ‘Geez, your whole body is upstairs!'” 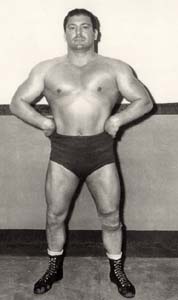 Besides his given name, Newman wrestled under many other monikers.

He recalled his first stint under a mask for ‘Whatever Happened to…?’

Whipper Billy Watson had called, wanting to book him in the southern Ontario territory, based out of Toronto. “He wanted me to come in there under a mask, but he didn’t tell me that. I walked into the dressing room in Niagara Falls and somebody said, ‘Hey, you’re supposed to be under a mask!’ Luckily, (Dan) Red O’Connor was there and happened to have a mask, so he ran back to Crystal Beach, got one, and gave it to me. Ray Villmer and Fred Atkins were both up there then. I had a bunch of masks made up after that. I went and got women’s girdles and cut masks out of ’em. They worked pretty good.”

Newman was the Masked Marvel in Toronto in 1950, and even had a manager called The Masked Manager (Mayes McLain). He also wrestled as Mr. X in Hawaii, the Masked Medico in Japan in late ’60s, and as The Iron Russians — with and without masks — with Hands Schnabel.

The mask meant extra trouble. “When you’re working with a mask, you’re kind of blind. I’d leave the ring and people would run up and jab lit cigars into my calf muscles,” he said.

He quit wrestling full-time in 1967, and became an auto and truck salesman in Honolulu. Newman moved to Bellingham in 1987, and continued, for a time, in the truck sales business before retiring altogether.

He divorced from Shirley in 1953, and married three other times, including once again to Shirley 32 years later. He had his only son with Shirley, Nestor, who is an accountant in Washington State. Shirley was the only wife that he ever took to meet his family. “He did tell me that he had always ‘liked me best’ for whatever that all means,” said Shirley. “He was a full-blooded Finn and they are best know for being very stoic people, so that coming from him was quite a revelation.”

Lou ‘Shoulders’ Newman told Teal that he had no regrets about becoming a wrestler. “I loved it and think it was great. It got me away from the farm. What the hell could I have done there? I would have been a bookkeeper, or auto mechanic, or an engineer on a boat. That’s what my brothers did. I’m not saying there’s anything wrong with those things, but I just wasn’t cut out for that kind of a job.”