Backstage at the Pillman Memorial Show

By STEVE HOOPER — For SLAM! Wrestling 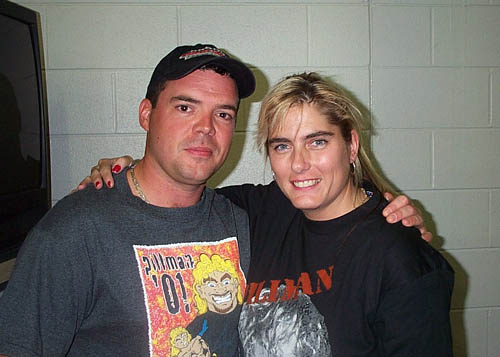 I was privileged enough to be part of the Pillman 2001 Memorial Show in Cincinnati, Ohio, and thought I might share some thoughts with you all regarding this fantastic event. This year marks the second time I have worked this great show. For those that don’t know me, I have been a ref in pro-wrestling for the past 10 years and have been lucky enough to work all over Canada and the U.S. I originally started with a promotion in Vancouver, now known as ECCW, and most recently I have been with Stampede Wrestling in Calgary for the past 3 1/2 years.

Stampede Wrestling is a promotion chock full of amazing wrestling and with a long, storied history behind it. Many greats have either started their illustrious careers in the business or have toured with the promotion in Calgary over the years. Stu Hart began promoting in Alberta in 1948, and the list of greats that have come and gone would fill up an entire article in itself. It’s been an honour to represent this company and the Hart family over the years, and it was a great pleasure to do so again at Pillman 2001. Stampede veteran Richard ‘Principal’ Pound was also there.

Although I never had the pleasure of meeting Brian, I have been the recipient of many, many laughs while listening to the Hart family reminisce about him. Bruce Hart was very close with Brian and they have shared many a rib over the years, which are as funny to talk about today as they no doubt were to actually execute at the time. As many of you know, Brian was originally trained by Bruce Hart in Stu’s famed Dungeon, and eventually went on to train new recruits himself in the Dungeon. He was firmly entrenched with the Harts and was considered family. Brian’s widow Melanie is also a wonderful person and is always a gracious host to the boys at the show. She is a very sweet person who appreciates all the time and energy put into this project every year. Les Thatcher puts his heart and soul into this show each year, and I can only surmise that trying to organize an event like this is a feat in itself. Les can only be described as one of the most down to earth, genuine people I have ever had the pleasure of meeting in this business and he deservedly commands an amazing amount of respect from the boys. 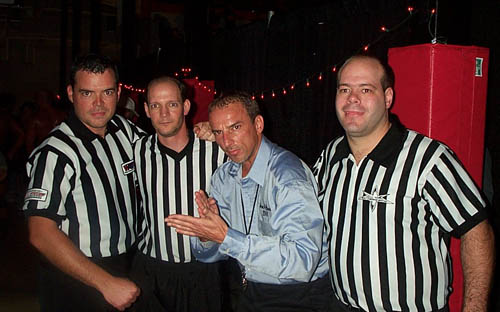 The locker room area at the Pillman show is unlike any other locker room in the business. This is a show where many faces from the past meet the faces of the future, and it is a time to rekindle old friendships. The atmosphere is very relaxed, and the stress of working hectic road schedules is put aside as everyone comes out and pays their respects to Brian. The beginning of the show is marked by a parade of all talent to the ringside area, where the traditional 10-bell salute is given to Brian, as well as to all the other brothers that have fallen. I’ve unfortunately been a part of a number of 10-bell salutes, but this one always seems very special. 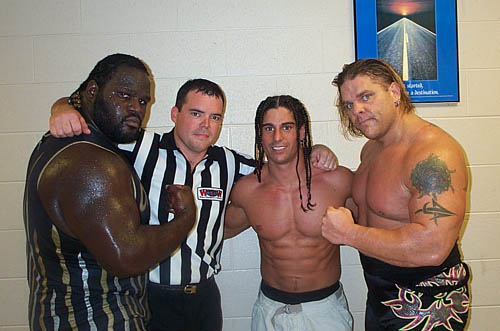 This year’s show had a spectacular array of talent on it, headlined by a Main Event of Matt & Jeff Hardy vs. Edge & Christian vs. DDP and Kanyon. As an example of what this show means to the boys, one of the top stars on the show missed his plane to Cincinnati. However, instead of staying home, he pulled out his own wallet and told the airlines to “Get me there”. He arrived just in time for his match, and put on a great show. Some of the best up-and-coming independent talent was also featured on the card, and many of the faces seen during the independent show will no doubt be featured on RAW and be seen overseas in the very near future. 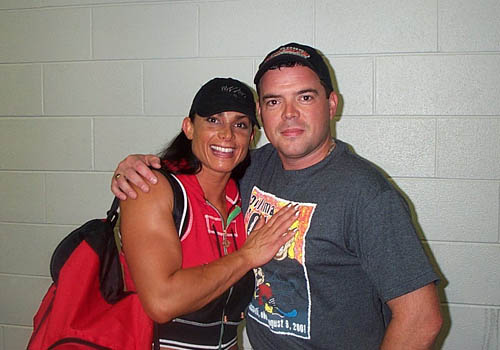 There were many moments during the show I could talk about, but one of the most memorable was the surprise announcement made by Dean Malenko. Dean is a true gentleman in this business and is one of the most well-liked and well-respected workers in the locker room. He is also an extremely funny guy, which is something that perhaps a fan watching wrestling on TV may not realize. Dean has been wrestling for many years, and it was a known fact in the back that he had recently been contemplating retirement. This was never made public to the fans, however Dean surprised everyone by announcing to the Cincinnati crowd that his match that evening would likely be his last. Les made an impromptu appearance at ringside and gave an unplanned speech about Dean. The fans gave Dean a noisy standing ovation as he made his way back to the locker room, where he was given accolades by the boys as well. Dean will remain with the WWF in a training capacity, and those that have ever spent time in the ring with him will know that not only is he one of the best technical wrestlers move for move in the business, but is also one of the best trainers and is often asked to critique matches for the boys. Although I do not know Dean myself personally, I know the rookies are looking forward to having him guide them to a successful career. 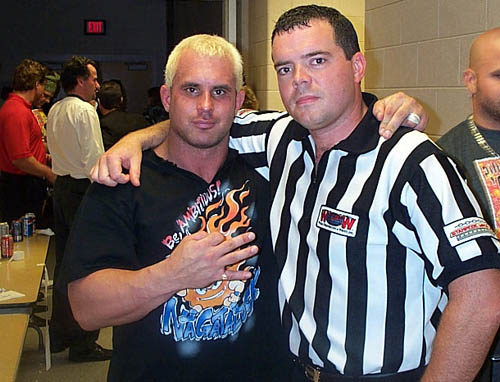 Another special moment came when Beautiful Bobby Eaton was lead to the ring by the one and only Jim Cornette for his match against Terry Taylor in a Legends match. The special referee for this match was Ricky Steamboat, and it was a super affair. The crowd popped in a BIG way for this flashback to the Midnight Express days!

We also saw Bill Alfonso, aka Fonzie, hit the ring and referee a match for the show. Bill worked for many years as a WWF referee, and is more recently known as the Manager of Champions in ECW, handling the careers of Sabu and Rob Van Dam. He will forever be known for his ringside antics and his infernal whistle!! Coupled with the amazing voice of ECW’s ring announcer Steve DeAngelis, this was an entrance that won’t soon be forgotten.

All in all it was once again an honour to represent the important link between Stampede Wrestling and Brian Pillman. My hat goes off to Les and his entire team, including the producers, security, ring crew, the memorabilia sales staff, and the tons of volunteers that made this show possible. They put on a class show, and I am looking forward to next year’s event! 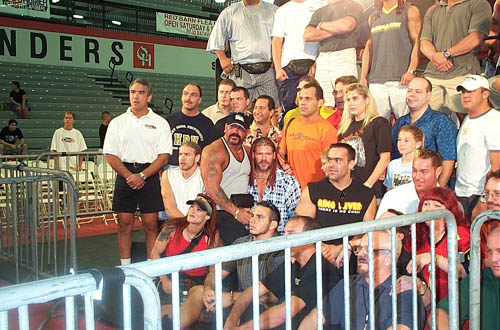 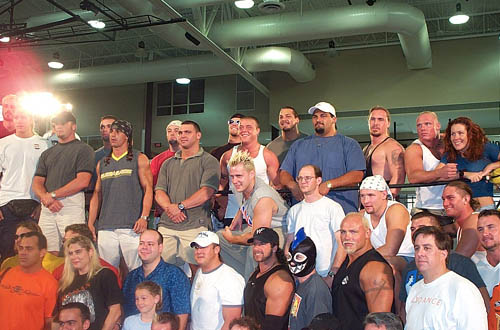 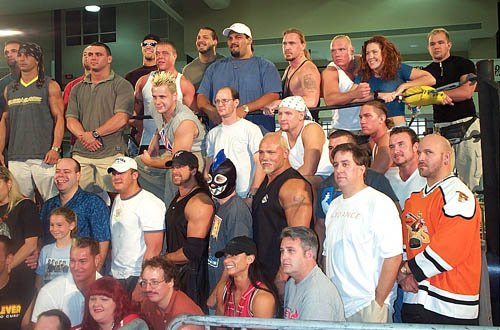