As a former amateur wrestling champion and Olympic gold medallist, Kurt Angle had a tough time making a leap to the pros, but success in the World Wrestling Federation has come quickly to the “Olympic hero”.

“There was a lot of transitions and it was very difficult for me to slow down and to learn a different style, but eventually I was able to catch on and be the best I could, and I think I’ve done pretty well so far,” he told SLAM! during the Wrestlemania X-8 press conference last Monday in Toronto. 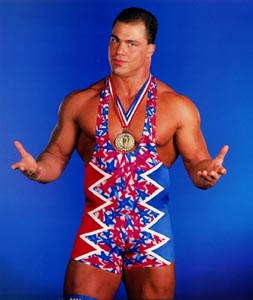 Part of the transition for Angle was adjusting to the many aspects of performing in the WWF. Angle was used to working against one opponent, whereas now there are several people he has to keep in mind while wrestling. “You’re so used to competing against an opponent and focusing on that one opponent, not so many things you do in sports entertainment which includes crowd, working with your opponent to make sure the show goes on really well,” he said.

Angle is one of fastest rising superstars in WWF history. Since joining the pro circuit in 1999, he has held the European, Intercontinental, and World Championships, as well as being the 2000 King of the Ring and former WCW Champion.

Angle’s popularity is high across North America, in spite of his character being an American patriot. Despite being covered in the red, white, and blue of the USA, Angle notes that the fans react well to him north of the 49th. “Actually, my reception is very good here in Canada,” he said.. “That’s the one great thing about Canadian fans, or fans in the United States for that matter — it doesn’t matter where you’re from. It matters where you are on the card, what you’re doing in the storylines.”

“Fans enjoy me because I’m funny and entertaining, at least my character is,” he quipped.

A lot of Angle’s success can be attributed to his own enjoyment of his character. “I think he’s entertaining, he’s funny, and he’s one of the best athletes in the World Wrestling Federation, no doubt about it,” he said.

Angle, who won the gold medal in freestyle wrestling in the 220-pound class at the 1996 Olympic Summer Games, is looking forward to Wrestlemania X-8 in Toronto. He feels that the WWF does not do enough shows in the Ontario capital. “I don’t think we’re here enough,” he said. “Three times a year might sound like a lot to most cities but in Toronto, Canada, they’re very loyal to the World Wrestling Federation.”

“Every single time we come here, it seems to be sold out. The Toronto fans really enjoy the show.”