For years, Booker-T was considered one of the most underutilized wrestlers on the WCW roster.

A true professional with a workmanlike attitude in the ring, Booker-T now finds himself in the main event picture only after a few months since signing with the WWF. 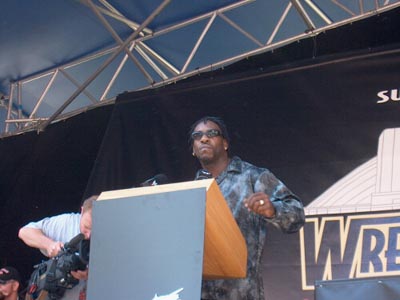 Booker-T looks out into the crowd after the WrestleMania 18 press conference. — Photo by Greg Oliver

And even though he’s only been in the WWF for a short period of time, he couldn’t be happier with how his career is progressing and his push.

“I’m really happy. It’s overwhelming actually,” the former five-time WCW World Champion told SLAM! Wrestling after the WrestleMania 18 press conference in Toronto this past Monday “The push is one thing, but the fan (reaction) is another thing. To work in front of 20,000 fans every night and everybody is going crazy, it’s unbelievable. As far as my success and getting where I am, it was just a matter of getting that chance. I got the chance and now I’m on top of the game.”

Many within wrestling are surprised that he’s been able to climb the ladder in WWF and establish himself as a main-eventer so quickly.

Don’t count Booker-T among them.

“I wouldn’t necessarily say it’s a shock or anything like that. It’s something I’ve been working towards for quite some time. To leave WCW on top, set me up in the prime position to go to the WWF and do it all there and set my standards there of being one of the best wrestlers this business has ever seen.”

Comparing the differences between WCW and WWF, Booker-T says: “WCW was run like an independent circuit with a whole lot of money. The WWF is a wrestling company. Everything here is being constructed towards one goal and that’s building the ship and making the whole thing float. That’s what I like about it.”

Booker-T also explained the differences in the locker rooms: “(The WWF is) totally different from WCW. There was a lot of backstabbing down south and in the WWF everybody is there to do their job and not concentrate on what somebody else is doing; not kissing somebody’s behind to get in a certain position. The WWF is all about how hard you work.”

Still, the talented super-star doesn’t look back on his time spent in WCW with total disdain. His most fond memory is the best-of-seven series he had in 1999 with Chris Benoit.

“The best-of-seven (series) put me on the map, put me in a position as far as being one of the great singles wrestlers. Doing it with Benoit, who’s one of the top three workers in this business to ever come along, was great. I do plan on doing the best-of-seven one more time with Benoit and hopefully it’ll be the same outcome with Booker-T on top.” (laughs)

Asked who he’s enjoyed working with the most since coming to the WWF, Booker-T answered: “Kurt Angle would have to be the guy I’ve had the most pleasure working with because his intensity, his work ethic, his style fits with me perfectly.”

With the buyout of WCW by the WWF, Vince McMahon enjoys a monopoly on the wrestling industry in the U.S. and Canada and holds the fate of hundreds of wrestlers in his hands.

It’s a prospect that many in the business are scared stiff about, but Booker-T maintains he isn’t concerned.

“I’m not worried at all because I do one thing and that’s go out and perform and give the people what they want to see. A lot of guys might be worried as far as job security but for myself I feel like I’m in a great position. I couldn’t be in a better position.”

If anything, Booker-T feels the WWF monopoly benefits wrestling fans.

“It’s really good because you have ECW, WCW and the WWF all in one little spot right now. The fans get to see something they always wanted to see and that’s the dream matches; Booker-T against the Rock, ‘Stone Cold’ against whomever, DDP and the Undertaker and now they finally get to see those matches.”

Booker-T may not know what strange twists of fate lies ahead, but he doesn’t rule out a reunion with brother and former tag team partner Stevie Ray.

“Harlem Heat may form a reunion one day but right now my brother is in Australia wrestling and he’s having a good time.”