Winnipeg’s Spyder did it the hardway

Spyder is just about as hardcore as they come in Manitoba.

He was initially trained by well-known Japanese hardcore star Leatherface (Rick Patterson), and is well known for bleeding profusely, aka ‘showing colour’ during matches. Spyder, aka James Sherwood, has done thumbtack matches, barbed wire matches and even a bed of nails match, in which some of the nails actually pierced his cheek and his nose. 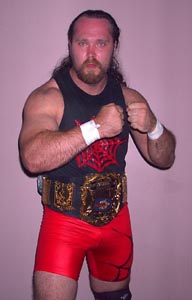 Yet he will admit to being a little bit worried about the repercussions of his actions, whether it’s his health or things like contracting the AIDS virus through all the cuts.

“I’m pretty sure with every worker, there’s a little bit of concern. It seems like there’s a very select few people that do show colour,” Sherwood told SLAM! Wrestling. “When I’m doing hardcore matches, I’m very selective. If I hardway myself or get hardwayed, it happens. I get tested, so I try to protect myself. I hope every worker in some way does protect themselves in all forms of the business, whether it’s drug use or having unsafe sex.”

Sherwood thinks that hardcore may actually work in his favour in some ways. “I do a lot of hardcore, and I can get away with that as my body wears down a bit… I’m not a big highspot guy, so my body’s safe that way. It’s just getting hit in the head a few times more than average.”

With the help of his cousin Brian Bailey, who has wrestled as Skar and Steel Carnage, Sherwood broke into the business back in 1998. Bailey introduced him to Patterson.

“[Patterson] kind of took me under his wing and started to train me,” Sherwood said. “He took off to Japan and I was left without a trainer.”

He was told about Ernie Todd’s Canadian Wrestling Federation (CWF), and went to Todd to learn more and continue his training under then-head trainer E.Z. Ryder.

Now, with just three years under his belt, Sherwood finds himself as the NWA North American champion, having won a four-way dance against Alex Rain, Dr. Love and Gene Swan. “The match itself wasn’t that great, but the title itself is great,” he said.

If he’s still the champ in October, Sherwood will head down to Tampa Bay for the 53rd NWA Convention and Battle of the Belts, where he is scheduled to defend against Quinn Magnum, an NWA wrestler out of Pittsburgh.

“We’ve talked on the phone. We’re trying to get a match actually for September 22nd, we’re trying to get something going to lead up to the show,” Sherwood said. “I hear he’s a big guy, so it’s going to be a very interesting match … I was told he likes to do a little bit of hardcore. Myself, that’s what I’ve been known to do here.”

Ah yes, back to the hardcore.

Despite the fact that the bed of nails three-way match he was in resulted in a trip to the hospital after the match, Sherwood is still high on the experience. “The crowd got a really good pop out of it. I kind of broke kayfabe for a little bit because I wasn’t supposed to show colour that soon.”

The whole NWA-affiliated CWF promotion has gotten more extreme over time, and Sherwood credits himself and Robby Royce for pushing the envelope, doing more table spots.

“[I’m] trying to do the more Japanese hardcore, not the traditional WWF North American-style hardcore. It got over,” he said. “Thumbtacks, the crowd really enjoyed that and I got really good pops out of that.”

His full-time job as a lumber grader has helped on occasion as well with his hardcore matches — getting lumber at a discount. He built the bed of nails himself.

Besides his NWA North American title win, Sherwood also counts a victory over Paul Diamond in a cage and a NWA Canadian tag team title reign in B.C. with ‘Dirty’ Dan Denton as career highlights.

Denton remembered Spyder as a hard-working kid who really wanted to improve. “At first I thought, here we go, getting in with a green kid who I’ll probably have to help tie his boots up before we go out. But I was soon to see that he wasn’t like that at all and it was a great experience,” Denton told SLAM! Wrestling. “The cool thing about Spider is that he is a real student of the business. My deal is to brawl but I really believe there is a science to it. It is one thing to go out and hit people with tables and chairs but it is quite another to take the audience along with you. I like Spider and started to teach him this. He loved it and really got into it. I was impressed. After every match we would go over what went on and why? He would ask questions about bringing the house up and down. He would listen to what I would tell him and you could virtually see the improvement every night. You could really see how much he wanted to be a working pro wrestler. His enthusiasm rubbed off on me and made me want to work that much harder. It was a great experience.”

On September 30, he’s set to face off against NWA World champion Steve Corino in a battle of two grapplers born in Winnipeg. Corino dropped the NWA North American belt to Robby Royce a while back in the River City, so the so-called ‘King of Hardcore’ has something to prove in town. “It should be a very interesting match, I think,” he said.

The thrill of the crowd is still the primary reason he’s in wrestling, having done occasional spot shows in Minnesota for Eddie Sharkey and has worked for Stampede Wrestling shows as well.

Denton will take a little credit for encouraging Spyder to get out of Winnipeg, see some other territories and work with other wrestlers. “He took my advice and hopped in his car at every opportunity and drove places and sure enough he ended up working. Why? This is a kid who wants to be a working wrestler. Many talk about but this guy does it. He works hard and deserves every break he gets.”

Keeping the fans into his match is really important to Sherwood.

“For myself, I just listen to the crowd. They chant CWF. Once I hear them chanting those three letters, I’ve done my job and for myself, that’s what I think it’s all about. I’m not really into the money aspect of the game, I’m just there to entertain people.”

The NWA Convention may change all that, of course, and Sherwood is open to options, willing to pick up and move to make a career happen.