MONTREAL — It took the chaotic ways of World Championship Wrestling to bring Pierre Carl Ouellet and Jacques Rougeau Jr. back together.

The two former partners had a falling out, in part stemming from Ouellet’s desire to be a singles wrestler, and Rougeau’s desire to stick closer to home, promote and teach wrestling.

Over the past number of years, they kept an eye on each other’s progress; Rougeau aware of Ouellet’s stops on the international scene and brief journey through ECW; Ouellet following Rougeau’s International Wrestling 2000 promotion in Montreal. 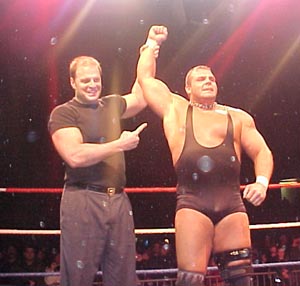 “He had a few shows without me. I was watching from my home, and watching what kind of business he was doing,” Ouellet said backstage at last week’s International Wrestling 2000 show. “And I’m sure that he was also hearing things about me. Basically we met at the WCW show.”

The WCW show was the New Blood Rising pay-per-view back in August 2000 in Vancouver, B.C. The WCW creative team wanted to start Lance Storm’s reign in Team Canada, expanding the team by including new members. WCW called Ouellet, explained their plans, then asked him to put them in touch with his former Quebecers parter. He did, without hesitation, despite the fact they hadn’t talked in quite a while.

“I didn’t have anything bad against him. I have no bad blood against him. But in this kind of business, it’s a jungle, it’s a dog eat dog world, and Jacques knows the ropes a lot,” Ouellet said.

Rougeau left WCW immediately after the PPV, upset with plans that then-booker Vince Russo had for him as basically a glorified jobber. Ouellet stuck around for the two other dates that followed in Kelowna and Kamloops, B.C., and was given the Hardcore belt by Lance Storm.

He thought that was a sign that WCW wanted him in the company, and all that was needed to be worked out was his visa. “I guess they didn’t want to spend the money on Canadian talent or something like that and they used other American guys like Jim Duggan,” he said.

Ouellet learned from the experience, and when he returned to Montreal, he and Rougeau hooked up again, this time with Jacques as the agent and promoter.

“I signed for five years with Jacques. I’m going to be wrestling for his promotion, International Wrestling 2000, and also he’s going to be my agent. So he’s going to basically do all the negotiations for me, if I have to talk to WCW or WWF. Like an agent in hockey, like Pierre Lacroix, Bob Sauve,” explained Ouellet.

He thinks that the move towards more agents in pro wrestling is long overdue. “It has to take that direction because it gives us more time to just think about working out, and think about wrestling, and don’t think about the business-side of the thing. I think Jacques is tremendous for dealing with all kinds of things in a wrestling promotion.”

On December 29, Ouellet headlined the International Wrestling 2000 show against King Kong Bundy in front over more than 4,000 fans at the historic Verdun Auditorium in Montreal’s west end. He even used a little of his ECW experience, and went through a table. The bloody gash on his left arm after the match was testament to the fact that it wasn’t a gimmicked table. Rougeau wanted to keep the licencing body in Quebec happy, so the match was worked out in such a way to make Bundy pushing Ouellet through a table look like an accident. It worked.

So has Rougeau’s promoting. Ouellet’s presence in the province went up immensely as a result of his main event match, with many media promoting the event, and covering it as well. “I’ve had more exposure in the last two, three weeks than I’ve had in the last two years with Jacques as an agent,” Ouellet said.

It’s meant a little bit of eating humble pie for Ouellet. He’s had to come to terms that the biggest successes of his career have come with Rougeau, not on his own.

“I wanted to go too fast in the World Wrestling Federation. I had already set my mind on the Intercontinental title, then I wanted to maybe go towards the world title. I’m almost 10 years younger than Jacques, and I didn’t want to stay trapped in that tag team too long. That’s when we started to argue a lot.”

Jacques Rougeau Jr. shared a brief run-down on his side of the equation. “It starts back when I got let go by WWF and they kept him. And finally we went back to WCW, and we talked a little bit. Long story short, when I started my own territory, he, for one reason or another, we never got into it, really, but he didn’t want to help me. That left a little bitter taste between us. I don’t know, maybe he didn’t want to turn his back on WWF or WCW, whatever. Or plans he had going for him.”

Rougeau couldn’t be happier that he has Ouellet back both as a friend and a colleague.

“If I had to tell you in two lines, I’d say, life brings us challenges, and life teaches us lessons,” Rougeau said. “And in the midst of those two things, you’ll meet both of them at a certain time. And I think Carl went through what he had to go through, and realized that maybe we’re better together.”

Being a world champ is still in his goals. “Everybody knows that wrestling’s a work, but we all want to accomplish our goals anyhow. … I’d like to be one of the top ten, or something like that, be part of something big for a major federation. That’s one of my goals … and success equals belts, so it would be nice to conquer a world title.”

So he’s open to offers from WCW or the WWF, but ECW isn’t really an option. “I think they’ve stopped their house shows, and they’re so disorganized. I think just here in Montreal, we’re doing better than they’re doing.”

Instead, at the moment, Ouellet’s sights are set on his home province. “I’m really focused on building up something here in the province of Quebec because Quebecers really get behind Quebecers, and they’re proud of what Quebecers do, and what they achieve.”

It’s a dream for success that Rougeau also harbours. “The Montreal fans, whether it’s with their Expos, with their Canadiens, whether it’s with their wrestlers, if we look good out there, and we’re winners, they’re going to come and see us. I’m going to put Carl Ouellet in a position where people are going to want to see him, and eventually if we don’t do business in the States, we’ll do good business here with the independents.”