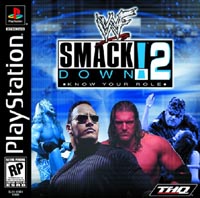 A new heavyweight champion of wrestling video games has been crowned, and its name is WWF Smackdown! 2.

Available now for the Sony Playstation system, WWF Smackdown! 2: Know Your Role is the follow-up release to THQ’s 1999 best-seller. At the time, Smackdown! was considered to be the best wrestling video game ever made. Know Your Role takes it to new heights, however, and to paraphrase Spinal Tap, cranks it to 11.

Improvements were made all around, and features have been added to make playing the game as close of an experience as possible to watching WWF programming on TV.

Highlights of Know Your Role include the Ladder match and the Hell in the Cell, both of which fans have been screaming for for years. To the delight of the millions… and millions of gamers, these items are actually interactive rather than just there as an on-screen prop. Players can pick up the ladder, use it as a weapon, and even perform moves off the top before climbing it to victory. Similarly, the Hell in the Cell can be broken out of and climbed on, thereby letting people recreate the infamous Hell in the Cell of 1998 — yes, opponents can be thrown off the roof, and even slammed through the top of the cage!

Add to that a nearly up-to-date and complete WWF roster (what, no Naked Mideon?), an expanded Create-a-Wrestler feature, and overall improvements in gameplay, and you’re looking at many hours worth of gaming fun.

Or what feels like many hours. The major complaint with the game is the too frequent stoppages for “Loading” information from the CD. At times, it feels like you spend more time waiting than you do in the ring — almost like the commercials during an episode of Raw. This is especially aggravating during Season mode when the game loads info for each match, even if you’re not controlling one of the participants.

Another area where the game is lacking is in the sound effects. Like its predecessor, Know Your Role features no match commentary, nor any actual voiceovers from WWF personalities. Instead, annoying repetitive guitar riffs are played constantly. However, this is easily combatted by playing the game with the sound off and throwing your favourite CD in the stereo instead.

Overall, Smackdown 2: Know Your Role is an excellent game. Despite minor flaws, it has easily surpassed all other wrestling titles currently available for the Sony Playstation. All hail the new champ!