Chris Jericho: Break Down The Walls
Koch International
60-plus minutes 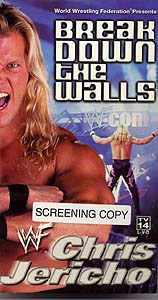 I really miss Coliseum Home Video not producing tapes for the WWF any more. That company really knew what appealed to wrestling fans. They’d dig up dark matches galore and raid the WWF vaults for rare matches and footage rather than just incorporating segments from Raw or recent pay-per-views that we’ve seen before. Once the WWF severed their relationship with Coliseum, the quality of their home videos went downhill faster than Al Snow’s career.

Chris Jericho: Break Down The Walls is the first in this new generation of WWF vids that is a real gem hearkening back to the Coliseum days. Unspooling like an episode of Biography on A&E, Break Down The Walls gives fans a rare glimpse into Chris Jericho’s present and more importantly, his past. The WWF has always been very reluctant to acknowledge the previous work of its talent. Not so, in this case. Home movie footage from Jericho’s childhood growing up in Winnipeg, Manitoba, and still shots of him training at the Hart Dungeon to his stint in Japan where he developed his technical stylings are all there. Eagle-eyed fans will even spot a photograph of Jericho and WCW superstar Lance Storm learning the ropes in Calgary as well as Jericho and Chris Benoit competing in the Super J Cup tournament in Japan.

It is clear from the outset that Jericho must’ve had mucho creative control in the video’s production. His zany sense of humour is prevalent throughout the entire tape. Two of the best segments are the mayhem Jericho caused while participating in a charity hockey game held in Madison Square Garden (which gives a whole new meaning to the term “hockey goon”) and Jericho attending a Fozzy concert where lead singer Moongoose McQueen (really Jericho) puts down Lionheart for having plastic surgery and liposuction in Sweden so he could look like his heavy metal idol. Jericho also has an unexpected but highly recognizable visitor to his home in Florida and pokes fun at himself while watching a promo he cut as a rookie. In short, Break Down The Walls is a laugh riot.

On the serious side, his feuds with Chyna, Chris Benoit and Triple H are traced. Deviating from the recent WWF tapes though, most of the matches are shown in their entirety, as they should be. That is a big plus in itself. The two standouts are Jericho and Benoit’s match at SummerSlam and his Last Man Standing match against Triple H. Interspersed between the matches are Jericho’s best promos (interrupting The Rock during his WWF debut and his Mr. Roboto rip on Benoit) that never get old no matter how many times you view them.

Chris Jericho: Break Down The Walls is a treasure trove for any Jerichoholic. As an added bonus, the tape doesn’t end after the credits roll either. For patient viewers there is one last segment and one last poke at your funny bone.