Precious Paul goes to the dogs

Whatever happened to Precious Paul Ellering, manager of the fearsome Road Warriors?

Believe it or not, at the moment, he’s racing in the famous 1,100?mile Iditarod dog sled race in Alaska. 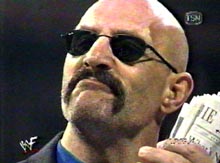 “I’ve always been a person who challenged myself,” Ellering told the Anchorage Daily News. “I think everybody needs something to make you want to jump out of bed. Everybody needs a passion.”

Ellering, 46, is a rookie in the race. He’s been planning for years, and has run a couple of races in his native Minnesota.

“Poor Paul he drew #79,” wrote SLAM! Wrestling reader Tammy of Chickaloon, Alaska, who was in attendance when the race began. “Paul looked like he was going to go for the win. His dog team looked very strong and focused.”

Ellering’s been in the wrestling business for 25 years, but he was never a big star in the ring. Instead, it was managing that made him a star.

At the height of his career in the mid-to-late ’80s, Ellering was the manager of Animal & Hawk, the Road Warriors. Collectively, they were known as The Legion of Doom. Ellering was with the Roadies in their glory days as AWA tag team champions, and world-renowed bad-asses.

In 1998, he returned to the side of the Roadies in the WWF, and eventually turned on them and managed D.O.A.

Since that time, he has been running a health club with his wife in Grey Eagle, Minnesota.