Benoit thrilled to be a team player 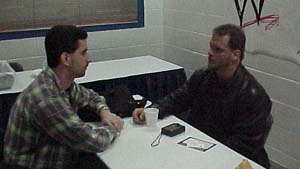 Three months ago, Chris Benoit was in Toronto wrestling Bret Hart for the World title in the main event at WCW Mayhem.

This past Friday he returned, wrestling on the WWF’s SkyDome show, putting over Rikishi Fatu in a mid-card bout.

When Benoit and pals Eddie Guerrero, Dean Malenko and Perry Saturn left WCW in late January for the greener pastures of the WWF, pundits said it would only be a matter of time before Benoit would be the break out star of the pack and become world champion.

It hasn’t happened. Yet. In the meantime, Benoit is just content to be with an organization that values his immense skills and doesn’t mind paying his dues in the WWF.

“Right now being in the WWF, it feels like a team effort,” Benoit told SLAM! Wrestling backstage at the SkyDome Friday night. “Morale is great. Everybody is optimistic and positive; everyone wants to make it work. In WCW it was far from that.”

Benoit and the Radicals have taken a lot of criticism from critics and members of the wrestling media. SLAM! Wrestling’s own Eric Benner took the foursome to task for walking out on WCW and their contracts.

Benoit defends the decision to leave and has no moral qualms about doing so.

“In my eyes I signed my contract with Eric Bischoff. There were a number of promises and guarantees made with Eric. I trusted him, I had faith in Eric and he earned my respect. As far as I’m concerned when he left, my contract was null and void from that time on.”

Benoit grew increasingly frustrated in WCW. He felt he was being held back and there was no opportunity for him to advance in the company and become a major player.

“I’m 32 years old right now. I feel I have got a lot more to offer to the business of pro wrestling than they were giving me the opportunity to offer. It constantly felt my career was being undermined at the time from certain people who were in certain positions of power. I’m not at liberty to talk about their names right now due to legal terms.”

Despite a legal gag order, Benoit has been very outspoken about one of his former co-workers in WCW, namely Hulk Hogan. Benoit penned an article on his own web site, taking Hogan to task for derogatory remarks he made about Kidman not being able to draw in a flea market.

Benoit feels that Hogan should be more of a locker room leader in WCW.

“He’s not a locker room leader. He’s far from it,” continued Benoit. “Your past is not your potential. I know I’ve said some derogatory things about him but you can change today if you want to. I was asking him (on my web site) what type of legacy do you want to leave behind in the business? Fifteen years from now, if a guy asks me what it was like working with Hulk Hogan, from my experience working with him I don’t have that much positive to say about him.

“The whole time I was there in WCW, I never had a conversation with Hogan that went further than ‘Hi, how are you doing’?

“I remember one time, I had a match and after the match he walked up to me, patted me on the back and said ‘Good job.’ I felt so great. Coming from him it meant so much. That night walking out of the building I remember feeling so great thinking, ‘damn, coming from him that means a lot.’ I feel he should be playing more of that kind of a role to the younger guys.”

When he signed with the WWF, it ended Benoit’s relationship with New Japan Pro Wrestling. Having wrestled there, off and on, for the past 13 years, Benoit knew signing with the WWF would mean he could no longer work odd dates for the Japanese promotion where he first gained international renown for his work.

He and Malenko were scheduled to take part in next month’s Super J Cup, the most respected junior heavyweight tournament in the world. Benoit won the inaugural tournament in 1994 defeating the Great Sasuke in the main event, catapulting him to the top of the international wrestling world.

Still, the fact he would no longer be able to work for New Japan had little bearing on his decision to go to the WWF.

“(It wasn’t a factor) because I hadn’t gone that often being with WCW,” stated Benoit. “They never really sent me that much. I don’t look at things like ‘I could have done this, I could have done that.’ I look at it like what my potential future is.”

Outside of the ring, Benoit is a proud new father with the birth of his son, Daniel. It’s his first child with his girlfriend, the former Nancy Sullivan, and mother and baby are doing just fine.

“Nancy’s real good. She’s out of the hospital now, but having a C-section takes quite a bit of time to recuperate so she’s not able to lift things or do what she normally does which is frustrating.”