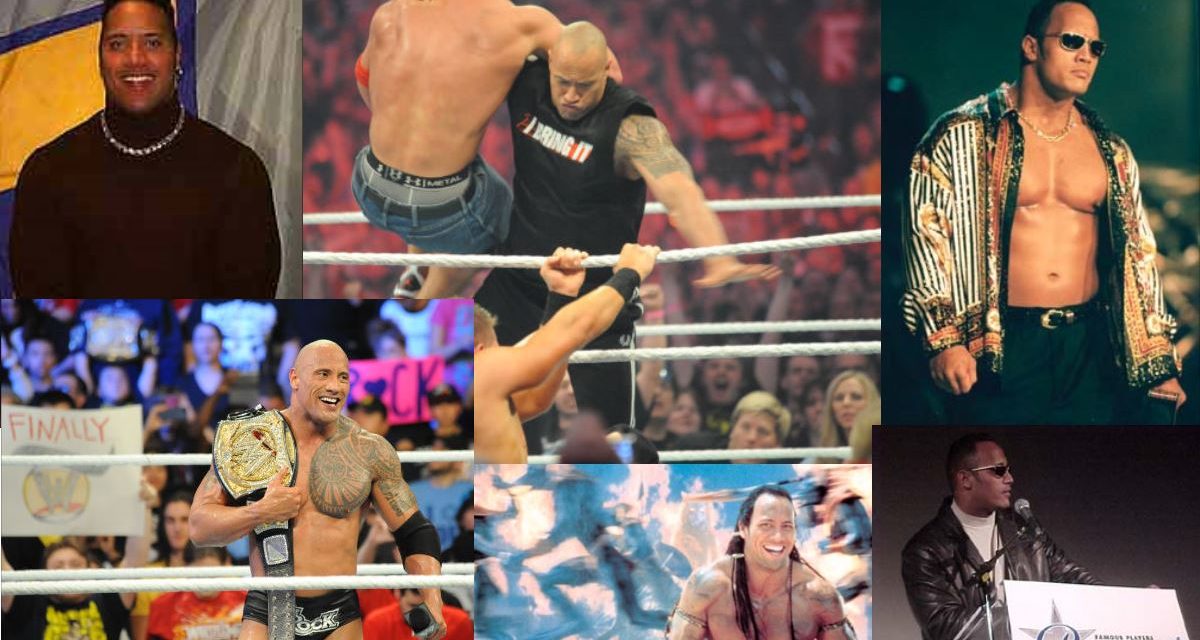 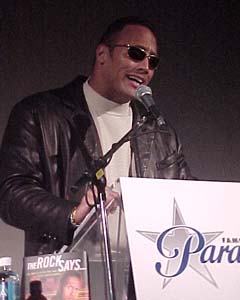 The Rock looks for the media jabronie asking a question. — Greg Oliver

Finally The Rock has come back to Toronto! And it’s much to the delight of hundreds of shrieking fans and a throng of reporters who filed into the downtown Famous Players Paramount Theatre.

The People’s Champion descended downtown Friday afternoon for a book signing of his best-selling autobiography ‘The Rock Says..’. A stream of rabid fans lined the sidewalk next door at Chapters waiting in anticipation for ‘The Great One.’

“The Rock just wants to know if you can smell it?” The Rock asked his loyal disciples who hollered and screamed in ecstacy as he raised the People’s Eyebrow.

Flanked by Carl De Marco, WWF Entertainment Canada President, on one side and John Bailey, President of Famous Players Inc. on the other, The Rock fielded questions on a variety of subjects, including whether or not he’ll be at WrestleMania.

“The Rock will go to WrestleMania and the Rock will be the next WWF World Champion,” promised the charismatic Rock.

Asked about the WWF’s XFL venture, The Rock said “The XFL is going to be fantastic. It’ll be a legitimate game with a twist of the WWF.”

Although his book immediately skyrocketed to the top of the New York Times’ Best Seller list, the autobiography has come under some criticism. Unlike Mick Foley’s ‘Have a Nice Day’ autobiography, critically acclaimed for its brutal honesty, ‘The Rock Says..’ sees the book start off with The Rock writing about his childhood and college days as the real life Duane Johnson.

However, in the second half, he assumes The Rock character when detailing his career in the WWF, espousing all his traditional trademark sayings and keeping in character.

Many critics believe that this compromises the integrity of the book and calls into question its legitimacy.

The Rock defended the choice to write half of the book in character.

“I think when you look at the character of The Rock, his first and foremost purpose is to entertain the fans like nobody else can. I don’t think it did anything to hurt the credibility of the book.

“All it did was solidify the fact that the character of The Rock is very entertaining,” he continued. “The feeling I got from going from Duane Johnson to The Rock and speaking in the third person was that it’s just entertainment.”

The Rock was asked to account for the enormous popularity of the WWF. “There’s a lot of ingredients to the WWF recipe. The appeal of the storylines and the entertainment we put out week end, week out.”

“Characters like The Rock, Stone Cold, HHH and Mick Foley, all these characters…. there’s a lot of crossover appeal there. And of course the simple fact there’s no longer people pulling the wool over anybody’s eyes. What we do is sports entertainment, it is choreographed, it is predetermined. Getting over that stereotypical hump, we as entertainers are able to put out an entertaining product.”

Asked about the condition of rival Steve Austin, The Rock revealed that he had spoken with him two days ago.

“He’s doing real good. That type of surgery is difficult. He’s going to be okay and I certainly look forward to another Rock-Stone Cold rivalry.”

Carl De Marco was asked when WWF Smackdown! would be broadcast in Canada. The Rock quickly interjected, asking “Let me understand this: The Rock’s show Smackdown! is not here in Canada?”, eliciting a thunderous ovation from the Smackdown!-starved crowd.

Carl De Marco stepped in and said he was in negotiations with CTV SportsNet and TSN to air Smackdown! in a prime time slot. He added that he’s really only interested in a slot that will be fairly permanent, and not get bumped for other programming.

Asked about his rumoured movie role as a bad guy in “The Mummy 2”, The Rock said “I just got the script for that. As far as expanding The Rock’s horizons, movies are going to play a big part. I certainly look forward to doing that in the future.”

Moments later he confirmed that he would hosting Saturday Night Live on March 18th. He’s only the second wrestler to ever host the show, after Hulk Hogan.

Bathed in a sea of flashing bulbs from photographers, The Rock had to fight to be heard over the hundreds of wrestling fans in attendance. The Rock raised the People’s Eyebrow as screeching girls pleaded with The Rock to take off his shirt.

“What type of pie? You don’t know anything about poon-tang pie,” replied the Rock to one frantic girl who begged him to show some skin.

De Marco announced the release of Smackdown! for Nintendo 64 Playstation in Canadian markets, giving the media and fans in attendance a sneak preview of the commercial featuring The Rock. He also mentioned the WWF Aggression CD due out in stores later this month.

The Rock will square off against HHH, Kane and The Big Show tonight in a four-way match for the WWF World title at Toronto’s SkyDome.