Legend ready for the WWF

Joe E. Legend is finding it hard to sit at home, so close to achieving his goal of making the WWF. 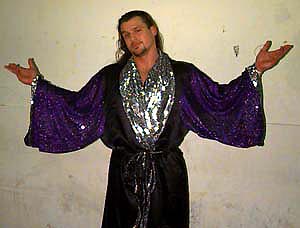 He’s signed, sealed, but not yet delivered. He had his meeting with Vince McMahon last week, and the WWF legal department is hard at work signing off on his character’s name and getting his work visa.

“I’m fired up, really looking forward to it,” said Legend from his Toronto home.

All he would reveal about his gimmick was that he would be “very mouthy on the mic.” When asked if that would be difficult for the veteran of the Canadian indy scene, he laughed. “I’m going to try to work it out. As long as I don’t get too shy!” He expects to only work RAW and Smackdown! for the first little while, and said that vignettes have been discussed.

Maritimers who saw Legend this summer on the Grand Prix circuit know that being shy shouldn’t be too much of a problem. In fact, Legend (whose real name is Joe Hitchen) has his fingers crossed that his Grand Prix rival Chi Chi Cruz gets his WWF break soon. Cruz is actually at a WWF training camp today.

“I’d don’t see anything holding him back,” said Legend, adding that his matches in Grand Prix against Cruz were the “best of my career.”

He asked the WWF on a couple of occasions if he should go to Memphis or another feeder system for training, but they didn’t feel it was necessary, believing that Legend’s day-in-day-out work in Germany and the Maritimes was an excellent training ground.

Legend is looking forward to getting on the road with old friends like Edge (Adam Copeland) and Christian (Jay Reso). He said both have been a “positive reinforcement” for him, as he sits on the sidelines waiting to get into the game.

Other Canadians’ experiences waiting for their visas to clear have been similar to Legend’s, who has been waiting since October. It took two months for Edge’s visa to get through, and six months for Val Venis (Sean Morley).

Besides getting into the ring with some people he’s wrestled before, like Venis and D’Lo Brown, Legend is excited by the possibilities of more additions to the WWF roster. “I’d love to work with Chris Benoit, Eddie Guerrero.”

Getting to the WWF will also be a big plus for his parents, who will no longer have to “go through traffic to see me wrestle.” But he doesn’t think that his father will ever stop watching Monday Night Football to watch wrestling.