Choose the VHS over DVD on Austin’s ‘Hell Yeah’

In most stores DVDs are $10 extra than a VHS copy. Is the extra footage in the DVD version of Hell Yeah: Stone Cold’s Saga Continues worth the extra money? In my opinion, to paraphrase Austin, ‘Hell, no!’ All you really need to know is what is on the VHS tape. The only extra “stuff” the WWF adds into this are a few WWF superstar interviews. But take my word for it, unless you are a die-hard Austin fan, the VHS version is more than enough.

There are five chapters on this DVD. The first chapter is the actual Hell Yeah! home video. With the only changes from the VHS Hell Yeah!, being that they use The Hell Yeah! song by H-Blockx at the start and have the complete Music Video at the end of it. But other than that this chapter is just what the VHS copy has. But if you haven’t seen the video tape, here’s a quick run-down on what is on it: 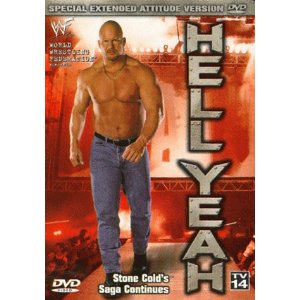 The next Chapter is called Say What Jackass? This part has interviews of Road Dogg, Edge, Godfather, D-Lo, Mr. Ass, Jeff Jarrett, The King Jerry Lawler, Jim Ross, The Rock and HHH. Most of the guys just said about how hard he works and how much he deserves his success. But one good story was from the Godfather. He told us that one time he phoned the Undertaker (Austin’s opponent for the night) and told the Undertaker (pretending to be Steve) that he was good and the Undertaker should be ready, blah blah blah. The Undertaker, not knowing Godfather was the one that called him, gave Austin one of the most physical matches the Godfather has ever seen that evening. In another segment, Mr. Ass talks about how heand Austin used to travel together and that in a two-hour hotel room match, Mr. Ass got his only win versus Austin. Other than that the rest was just about how Austin changed the business and remade wrestling.

The next Chapter is The Book of Austin. It starts out at the King of The Ring where Austin starts Austin 3:16. We then see Austin just jawjacking to a bunch of different backstage people from different times. We then see Austin in a bunch of different matches just doing good moves and the Stunner. Then we see Austin in the ring talking crap to different wrestlers. We then see highlights from Royal Rumble ’97 when Austin was wanted by all 29 men in the Rumble and how he pissed everyone off before the Rumble. Eventually leading up to him winning the Rumble. It then talks about Austin’s walk to the ring. He calls it the B.M.F. the Bad Mother @#$%! He wants to make the signal to the wrestlers in the ring on his way down to the ring. It then shows how Vince didn’t want Austin to be the Champ because he is not a Respectful Champion. It would be a Public Relations Corporate Nightmare! It then shows the time where Austin dresses in a suit and tie and makes Vince believe he is a Corporate Model. Of course this leads to Austin ripping off the Suit and hitting Vince with a Stunner. This chapter ends with Austin talking about how he will do anything to prove Vince wrong. It then tells about how over Austin is with the fans.

The last chapter is called Last Call. It has a preview of Over The Edge ’99, where Austin faces The Undertaker with Shane McMahon as the ref. it shows Austin handcuffing The Undertaker to his own symbol. Then we see the Over The Edge ’99 match where Austin gets “Fast Counted” out of the WWF Title. It then shows Vince as the Greater Power, and then Austin as The NEW C.E.O. It then previews the King of the Ring match with the C.E.O title hanging from the Top of the Ladder. Then it shows the King of the Ring match and shows how the briefcase moved up as Austin was about to get it and then shows how Shane grabs the briefcase and wins the match. Then the next night on RAW it shows Austin win the WWF Title from The Undertaker. Then in a new video package, it has an article about Austin’s childhood. And finally it shows the web link for StoneCold.com.

So once again unless you absolutely love Austin, I would stick with the VHS copy of Hell Yeah. Because what the WWF adds for $10 is definitely NOT worth it!