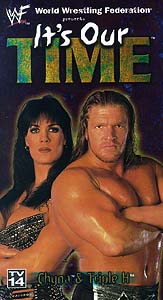 Current WWF Intercontinental Champion, Chyna, and her real life sweetheart, former WWF World Heavyweight Champion, Hunter-Hearst Helmsley, are two of the federation’s hottest commodities. Devastated by the loss of “Stone Cold” Steve Austin from the active roster, the WWF has relied on the superstar pair to carry them through. Triple H taking Austin’s role in a replay of the Stone Cold – McMahon feud and Chyna making history as the first female to hold a belt other than the women’s championship. It’s Our Time concentrates on their rise to fame as we follow Triple H and Chyna on a typical WWF tour. Although we don’t learn too many intimate details, we do hear about how they first met, what daily obstacles they face and what influence they have on each other’s lives.

Chyna portrays Helmsley as a loyal team player able to think quickly on his feet pulling the federation’s bacon out of the fire on more than one occasion. She cites an example of how Shawn Michaels walked out of a WrestleMania 14 publicity appearance after a fan pelted him with batteries. Hunter picked up right where Michaels left off, salvaging the situation. Hunter says Chyna is his biggest supporter pushing him to do better in and out of the squared circle.

In modern professional wrestling it is sometimes hard for fans to tell what’s reality and what’s fantasy. Is a wrestler really hurt or is the injury a work? Is a contract dispute real or part of an elaborate storyline? In It’s Our Time, the lines are blurred again making it difficult to tell when the truth is being told. Hunter speaks of how he was disciplined by the WWF for the infamous “curtain call” incident in Madison Square Garden where he and Michaels broke character and gave the WCW-bound Scott Hall and Kevin Nash a fond farewell in front of an arena full of fans. Hunter claims his career suffered because of it. We are left to wonder whether that’s a shoot comment or is it a sly way for Hunter to reinforce his Triple H character as a disgruntled employee taking a stand against the McMahons.

There are a few factual discrepancies too. Hunter remarks that he and Michaels came up with the idea for D-Generation X while WWF owner Vince McMahon has said in the past that his son Shane did. Triple H also credits himself for his present main event status in the WWF. Helmsley fails to mention that the WWF’s lack of top talent heels may have something to do with the push he’s received as well as his years of hard work.

Put aside the confusion and It’s Our Time is a comprehensive record of Chyna and Triple H’s partnership that fans of the titanic twosome will value enormously.

The video is rated TV14 for some obscene language. 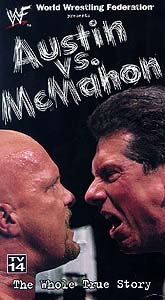 I am not sure what the “whole true story” tag line on the box means bearing in mind that wrestling fans realize the feud was a work but a video devoted to the epic “struggle” between WWF owner Vince McMahon and his biggest attraction, “Stone Cold” Steve Austin, is something no fan can pass up. Everything from the Zamboni incident to the classic attack on McMahon as he “recuperated” in the hospital (the sound of the bed pan banging off McMahon’s noggin’ still rocks) is there on one convenient tape. Austin Vs McMahon is presented like an A&E biography. Dave Hebner, Jim Ross, Terry Taylor and Michael Cole share their thoughts and theories in behind-the-scenes interviews. Sure, the segments are a total joke. Still, it’s amusing to see what “perceptive” insights they come up with to enhance the drama. Austin Vs McMahon is a must have for any wrestling fan’s video collection.

Andre The Giant – Larger Than Life

If you missed the episode or aren’t fortunate enough to have cable television, the WWF has released the A&E Biography on Andre The Giant as a part of their video series. Larger Than Life recounts the amazing life of the late, great Andre Rousimoff, better known as the one true wrestling phenom, Andre The Giant. This is a story that new fans should become acquainted with so they can appreciate the impact Andre had on the sport. Veteran fans who think they know it all, might learn a thing or two from this extensive bio.