‘Old School’ in for Danny Steele

Inside the ring, the 293-pound “Dangerous” Danny Steele strikes fear into his opponents in such promotions as the Hardcore Wrestling Federation.

Outside the ring, Steele is really 25-year-old Wallaceburg, Ontario native Darcy Lunn, a Special Constable with the Chatham-Kent police service, who’s decidedly old-school. “I love the athleticism,” Lunn said during an interview at a HWF show in London in September. 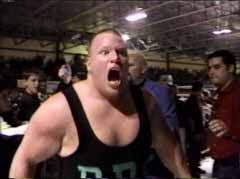 “Everyone is into the entertainment side of things now. To me, this is a sport, it’s not entertainment. Of course, there’s an element, but to me, I think of it more as a sport than sports entertainment, and I think the Internet plays a role (and is) to blame for the death of old-school wrestling.”

“Pro wrestling, right now, disturbs me. Growing up, watching Bearman McKigney shows and George Cannon, I really am a big fan of the old school wrestling shows, and to me, too many people know too much now and it’s really put a black eye on the sport as far as I’m concerned and I think the Internet is to blame for that. To me, I think it’s a world that shouldn’t be opened to fans. Fans should enjoy it for what it is and what they see. To me, the Internet was the death of wrestling.”

Yet, Steele will be there tonight at the Ring ‘n’ Ears show in St. Catharines, dubbed by the promoters ‘The Re-Birth of Hurt,’ in a Triple Threat Tables and Ladder Match against The Pitbull and Gino The Love Machine.

Like many wrestlers, Steele grew up as a wrestling fan, listing Dino Bravo and Bob Orton among his favourites. “I was a big fan of some of the indy stars from Ontario, Sweet Daddy Siki, Bearman, Willy Farkus.”

Steele declares that it was “the love of the game” that got him into pro wrestling. “It was something I always wanted to do. I had a friend by the name of Rick Bolton, who’s done some jobs for the Fed (WWF) and worked in Puerto Rico, about a fifteen-year veteran, and we were talking about it and it was something I always wanted to try to do. And once I had my day job, my real life settled to where I was happy, I decided to give it a shot, ’cause it was something that if you don’t do, I could see myself regretting it for a long time.”

The two-year veteran of the sport points to a recent match as one of the highlights of his career. “I’d have to say my biggest match was winning the HWF tag team titles with Tommy Twilight in a tournament in London (which took place on July 24th).” Steele said wrestling Doink the Clown and Bastion Booger were highlights as well. “I’d have to say that some of my best matches have been against Larry Destiny. We’ve worked a few times and always (had) five-star matches.”

After saying that he “couldn’t care two craps” about his fans. Steele admits to enjoying playing the role of the heel. “It comes naturally to me. I find that once I’m in that mode, I never have any trouble getting heat. I think because of my comments early, about how the fans have killed wrestling by knowing too much. I think when I get heat, it’s legit heat, because I don’t care for fans.”

“People don’t realize what a brutal sport it really is. People get hurt every day as a routine.”

In looking to the future, Steele admits that he’d “like to get into the World Wrestling Federation eventually. For right now, I’m happy working the independent scene, for a few more years, work some of the green off. I could see maybe ECW, or one of the bigger indies in the States, but it’d have to be good money and steady for me to move, at this point.”