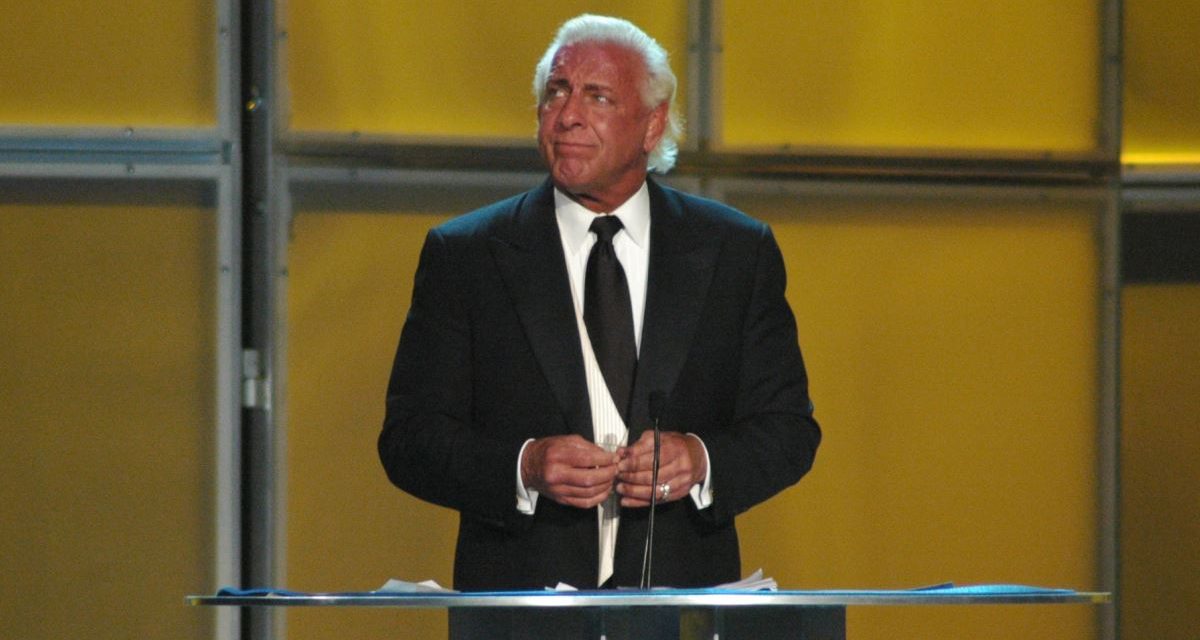 For one day last week, Japan shut down. The stock market and businesses closed. People stayed home from work. It was an annual national holiday to honor Japan’s elder population.

In North America, our attitude’s disgraceful. We push our older citizens into retirement because…well, heck they’ve earned it. If they’re lucky enough they receive a company pension and a pathetic joke of a cheque the government mails off to them every month. It’s not enough considering what they gave of themselves to their country, their families and their communities.

No matter the wealth of spirit, knowledge and skill these individuals still have to offer, Western society sees them as a petty nuisance. It sure as hell doesn’t respect them. And that my friends, is an embarrassment.

As The Land Of The Rising Sun paid tribute to the contributions of their mature citizens, a legendary wrestler returned once again to his home…the wrestling ring. Richard Fliehr, better known to grappling fans as the flamboyant “Nature Boy” Ric Flair, re-emerged on Monday Night Nitro after a lengthy absence due to legal problems between himself and World Championship Wrestling.

Who would forget? If the contemporary attitudes of the federations, some wrestlers and fans are true signs then the potential for a sudden breakout of selective amnesia is as likely as Sable (Rena Mero) doffing her duds on the next pay-per-view.

Whenever you speak to a wrestler about what their life will be like after their days in the squared circle are over Ric Flair’s name comes up without fail. The 49-year-old Nature Boy should retire. His gimmick is obsolete. He’s out of step. What’s funny is the young hotshots unloading this manure can’t give you one good reason why he should hang it up…other than he’s older than them.

That logic makes as much sense an promo cut by Ahmed Johnson. Flair’s forgotten more about wrestling and the business behind it than these fresh faces might ever know.

What elevated Ric Flair to the status of a living legend in my book? For me, it wasn’t any match he ever participated in. It wasn’t any of his classic interview segments either.

Ric Flair, Johnny Valentine, Bob Bruggers and promoter David Crockett were traveling by plane over North Carolina. Something went horribly wrong and the plane fishtailed out of the sky. The crash killed the pilot. Johnny Valentine and Bob Buggers suffered career- ending injuries. As for Ric Flair, his back was broken in three places. Doctors monitoring Flair’s condition said he it was unlikely he would ever walk again nevermind wrestle in the ring. Steel rods were implanted in Flair’s back as the formidable rehabilitation process began.

It is no mistake that up until 1998, Ric Flair has held a title every year since 1974. Promoters and fans alike recognize his contributions to the sport. Throughout his twenty five years as a pro wrestler, Flair’s charisma, ring presence and mic skills have stood the test of time. Case in point, his appearance on last Monday’s Nitro.

Flair’s little slower in the ring and he’s got a bit of a spare tire hanging around the old mid-section. Hey, life does that to the best of us. What hasn’t been dampened by Father Time is Flair’s enthusiasm. The Nature Boy respects the fans giving them his all whenever he laces up his boots. Too bad the same can’t be said for some of the younger promoters and wrestlers taking pride in the money pocketed rather than their performances or the satisfaction of their audience.

I’d REALLY hate to admit this but some of what Hollywood Hogan spouts in his interviews is the real deal. Without people like Hollywood Hogan, Ric Flair, Randy Savage, Jimmy Snuka, The Road Warriors, The Crocketts, Vince McMahon, Gene Kiniski, Verne Gange and Nick Bockwinkel; the biz would have folded up many moons ago. There’d be no stadiums filled to capacity. There’d be no insanely profitable pay-per-views. The young lions living off the echoes of the past wouldn’t be household names or hauling in six figure incomes.

And that’s a fact, Jack.