Barry Owen sits on his farm in Oregon, a husband and a father of two, trying to make ends meet as a cattle-rancher and working odd jobs for the city of Eugene.

Owen is estranged from today’s wrestling world. His previous life, that of the dutiful son and right hand man of legendary Portland promoter Don Owen, seems like a forgotten, distant memory. But to the people of Oregon, the memory of the Owen Family and NWA Pacific NorthWest Wrestling (PNW) is inscribed into their collective conscience forever. 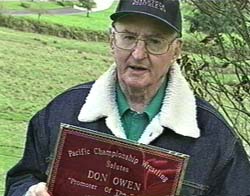 Now 88, Don Owen is hard of hearing, and struggling because his wife was recently put in a nursing home. SLAM! Wrestling’s conversation with the elder Owen led to his son Barry to talk for his father.

“My dad still gets recognized on the streets in Portland today,” Barry Owen told SLAM! Wrestling recently. “It’s heartwarming to know that so many people remember my dad fondly.”

Considering what Don Owen meant to Oregon, it’s hard to imagine how they could possibly forget. From the 1930s until his retirement in 1992, Don Owen reigned as one of the most successful promoters in North America and was among the most visibly recognizable people in the state.

Regarded as one of the best offices to work for during wrestling’s territorial days, Don Owen’s PNW was the longest-running promotion in the United States.

The main reason why it endured for so long was because of Don’s reputation as the classiest and most respected promoter in the business.

“My dad was a straight up guy,” stated Barry. “He never stiffed anybody on money and always paid the wrestlers what he promised them. He dealt with everybody honestly and treated the boys as if they were family.”

It’s a promoting philosphy that served the Owen Family well for over 60 years. Started by Barry’s grandfather Herb Owen in the 1920s, PNW was a family-owned business, a true ‘mom and pop’ set-up, that evolved from a boxing into a wrestling promotion.

“My grandfather did both boxing and wrestling at the beginning,” recalled Barry. “He even had Jack Dempsey on a few cards! My dad and Uncle Elton used to wrestle and help with the promoting until they eventually took over and just did wrestling.”

As the son of Don Owen, it was inevitable that Barry would get involved in wrestling.

“I basically grew up in the wrestling business. I started when I was eight helping setting up chairs,” reminisced Barry. “As I grew older, I would collect tickets at the door, help out at the box-office, act as security, I helped set up the ring, do the ring announcements. I did everything but wrestle.”

When Uncle Elton retired in 1982, Barry assumed a management position, becoming Don’s right hand man. Barry’s main responsibility was looking after and managing the roster of wrestlers as well as promoting spot shows in between PNW’s regular house show schedule.

“We’d hit towns like Eugene, Salem, Tacoma, WA every week and run Portland and Seattle every other week. In between, we’d do spot shows in places like Medford, OR and in Washington.”

The promotion revolved around the Saturday TV tapings at the Portland Sports Center, a converted bowling alley and the promotion’s home base. PNW’s Saturday night program was a staple on Portland TV since 1948 airing live each and every week. It became a local institution, developing a loyal and faithful following of wrestling fans who practically grew up with Don and his family.

“The Portland wrestling fans were different in that they knew the wrestlers as people,” recalled Dave Meltzer, editor of the Wrestling Observer Newsletter. “Watching the show, you could tell it was the same fans who would go to wrestling every Saturday night. They knew everyone and it was a real homey feel.”

“The first several rows of ringside, you couldn’t buy a ticket, because they were all permanent reservations,” continued Meltzer. “The first six rows had the same people sit in those chairs for 52 weeks a year for years on end. The only way to get a ringside ticket was if one of them died, you literally had to be in their will.”

“It was a special show,” said Barry. “It was the longest running wrestling program on TV. What was amazing was that my dad never signed a contract with the TV station, it was just a handshake deal.”

The show became a victim of its own success, however, when in the early 1990s station executives decided to move the show to a time slot past midnight.

“They wanted to make room for some paid programming and they explained it to my dad that we were doing so well and had such a loyal fan base that fans’ll tune in no matter what the time is,” stated Barry.

Initially, that was true as PNW’s numbers held steady. But as time progressed, both the TV and the live audience at house shows slowly eroded away.

It’s hard to imagine that house show revenue meant so much to a promotion in this day and age of monthly PPVs, cross-merchandising and Monday night ratings. In the corporate landscape of pro wrestling in 1999, house show gates are a relatively small piece of the revenue pie.

But for Don Owen and other promoters in the old territorial system, live attendance was the end all and be all.

“Our TV show was our life-line,” explained Barry. “It was basically a paid advertisement for our live shows. It was how we sold tickets. It was our bread and butter.”

“You have to understand that back then there wasn’t the merchandising involved in wrestling like there is today,” continued Barry. “We made money by selling wrestling tickets. We relied entirely on our TV show to get people to come out to the arenas. We had to get the fans following the storyline on TV into the arenas. It’s a difficult job when people don’t see the TV show.”

The time slot change was just one of many factors leading to the downfall of PNW. In wrestling’s golden days, promoters staked out their own geographical territory and it was generally understood that rival promoters couldn’t encroach those territorial boundaries.

The WWF and later WCW changed all that in the 1980s when they ignored this time honoured tradition of wrestling in their quest to go national.

“Vince McMahon basically told us that he was going to run us out of Portland,” said Barry. “He came in, swiped some of our big guys away from us and started running opposite us in our territory. We just couldn’t compete with New York (WWF) and Atlanta (WCW).”

Don also had the overzealous Oregon State Athletic Commission breathing down his neck. While most state commissions don’t make it a point of enforcing their regulations, Oregon was the exception.

“They regulated us to death,” said Owen. “They really made it hard for my dad to stay in business and be competitive with all their rules. Finally, he just had enough.

With the expansion of the “big two” into the Northwest, came the accompanying explosion of pro wrestling on cable TV. Barry feels this, more than anything else, had a devastating effect on his dad’s business.

“Cable really hurts us,” admitted Barry. “You had this overexposure of the WWF and other groups on cable, around 12 hours a week, and then you had to get people to come out to the arenas. They became burnt out on the product and pretty soon they figured why go out to the shows when you can watch wrestling for free at home.”

Barry feels that death of the territorial system will, ironically, be the undoing of the WWF and WCW.

“It was really in their best interest to have us around,” stated Barry. “Small territories like ours were where young wrestlers developed and gained experience. It was where the stars of tomorrow were going to come from. Now you’re seeing the result of our demise. They’re pushing green, inexperienced guys who aren’t ready. I don’t know where the stars of the future are going to come from.”

And don’t even get Barry started on the current state of the sport.

“I don’t really follow it because where I am we don’t have cable but from what I’ve seen I think it’s garbage. It’s not suitable for kids at all. It’s got nothing to do with wrestling. It’s more about entertainment more than anything.”

“The guy made money so you can’t really fault him for that.”

Barry and Don Owen gave their all for this business. They played by the rules, worked hard and were a model of honesty. And in the end, they were steamrolled by that very same business, all in the name of progress and advancement.

One would think all of this has left Barry Owen a bitter man. Think again.

“I had a lot of fun in wrestling. Other than being shut down, I can’t say I truly regret anything. I really enjoyed it. I don’t have any grudges.”

No regrets. No grudges. No bitterness. Seven years after leaving the business, and Barry Owen remains a classy guy.

He is his father’s son.