A Menace set to descend on Chatham

Darcy Lunn is excited about February 13th. On that day, he’ll be stepping into the ring against Reggie Marley as part of Unified Wrestling Force’s “Inception” at the CAW Hall in Chatham, Ont.

Fans may remember Lunn from his stint as “Dangerous” Danny Steele, a character that Lunn insists may pop up again. “Dangerous Danny Steele is by no means retired,” he told SLAM! Wrestling.

But on February 13th, Lunn is set to debut his new character, “The Menace” in Chatham and looks forward to it “if nothing more than just to expand my ability to tell a story in the ring and have a little fun. It may be a bit gimmicky for today’s fan, but I think wrestling was better off with the ‘crazy characters’ of yesteryear.” 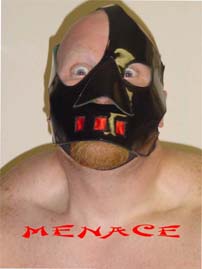 And just how different is the Menace from the Danny Steele that fans may remember? “The Menace is a work in progress. He’ll be a lot different than the cocky wordsmith that is Danny Steele! Likely closer to George Steele than Danny!”

Lunn describes “the Menace” as an attempt to relive an era when wrestling was more fun. With Menace being a heel, Lunn can do what he enjoys doing the most in the ring. “Being a heel is much more enjoyable,” he explained. “For one, a good heel can really shine a face. If I go out there first, work the crowd and do my job, Osama Bin Laden should be able to come through the curtain next and get a pop.”

Lunn’s debut as the Menace marks a return to a more regular schedule for the competitor who cut back his in-ring appearances over the last couple of years. “There were a lot of things happening in my ‘shoot’ life the last couple years,” he confided. “They were all positive, but time consuming, and I had to shuffle priorities around a bit. Now, I’m ready to go full steam back into the squared circle.”

“I’ve also slimmed down to around 265 p[ounds for my return!” he noted. “Most of my wrestling career I’ve worked betwen 270 and 320 pounds. I’m 265 now and although far from being in the shape I want to be, I’m more mobile and muscular.”

According to Lunn, leaving pro wrestling behind was never a possibility. “You can’t retire from wrestling. How many guys over the years have given up wrestling and not continued to remain involved in some capacity? They are few and far between. I obviously can’t remain an active competitor forever, but I’ll have a hand in the sport in some capacity. The last eight years have seen me wrestling, managing, training, booking and an assortment of other related duties. There’s always some way to stay involved.”

While Lunn is excited about a return to the ring, he is troubled by how much the sport has changed since he broke into the business in 1997. He’s saddened by the loss of a lot of familiar faces.

“Professional wrestling is still a brotherhood of sorts and the camaraderie is usually there at most wrestling events no matter where they’re held,” Lunn said. “Having a promotion running long term with a consistent crew certainly makes for a tighter knit group of workers. There’s no room for infighting and jealousy in a wrestling locker room. It can poison the show.”

“I found early on that most people working on the wrestling circuit were pretty well trained. Today, there’s a lot of people who call themselves wrestlers without a basis in the fundamentals,” Lunn said. “I think the problem is generational. By that I mean, there are guys who broke into the business with very limited training. Then, to make a few bucks, those guys start training others. The cycle continues until the product becomes very watered down.”

Another problem that Lunn sees with the industry in Ontario is that there are just less places to work.

“There are certainly less promotions. I’ve never promoted shows, but it seems that Ontario has a lot of red tape to go through to pull off a show with the licencing and insurance fees that go along with it. I think for many would-be promoters that can be financially prohibitive. There could come a day when no one with the exception of the WWE will be able to promote legally. I think the Athletic Control Act should be tabled again by the legislature for updating. By reading the Act, it’s pretty obvious that it was written at a time when wrestling was a little more cloaked and less understood. It speaks of ‘contracts to manage wrestlers’ and how they’re not valid unless approved by the Commissioner. The Commission has the authority to set the ‘rules’ of professional wrestling. Basically it equates wrestling to boxing which we know are two distinctly different animals.”

Lunn has a different take on the current downturn in wrestling’s popularity, seeing it as a good thing. “I think this cyclical downturn in wrestling’s popularity is one of the best things that can happen. It will hopefully serve to weed out people who aren’t serious about the sport. hen, when the eventual turnaround comes as it always has in the past, with any luck we will be left with the diehards.”

“It would seem that the recent downturn was somewhat in time with the movement of the WWE towards a monopoly of sorts. Perhaps a viable competitor coming forward would re-spark some interest,” Lunn said. “From what I have seen (of NWA-TNA), they have the people necessary to make a go of it. The difficulty, which is reminiscent of WCW, is keeping egos under control and maintaining a booking philosophy whereby there is one voice. I hope it works out for them. I’ve heard the rumours of financial instability like everyone else, so who knows?”

“I don’t pretend to have all the answers to wrestling’s survival,” Lunn admitted. “One thing I will go on the record and predict — I think you’ll see a hybrid professional wrestling/shoot fighting promotion surface in North America. The popularity of mixed martial arts will rub off on wrestling. I don’t like the concept, but I think it’s inevitable. It would seem to be a natural progression with the popularity of Mixed Martial Arts. Maybe I’m way off on this, but I could see an MMA organization with developed characters and wrestling flare for the unique.”

Outside of the ring, Lunn works as a police officer and is married to Janine, his wife of seven years and the father of four-year-old, Cody. “I look forward to seeing SLAM! readers out at the wrestling events in Ontario,” he said. “If you’re near the Chatham area, please try and lend support to the fledgling UWF.”

Lunn (as the Menace) will be facing Reggie Marley at UWF’s Inception show at 4:00 on Sunday, February 13, 2005 at the CAW Hall on 280 Merritt Ave on Chatham, Ontario. Tickets are available at the CAW Hall, Gamemasters Emporium and The New Nautilus Gym in Chatham.