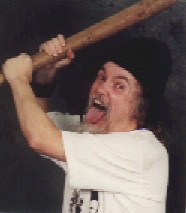 After training with Walter Shefchyk, Caveman Broda started his career as a manager. Shortly thereafter, he became a villain wrestler.

During his early years, he feuded with Wolfgang Schmidt, Frank Starr and Scotty Lightfoot.

Broda became somewhat inactive with the closure of New Brand wrestling in 1984.

In 1990, he rose to prominence with the opening of the CWL and was part of the opening roster for River City Wrestling in April 1993.

In River City Wrestling, he was one of the most endeared wrestlers, feuding with Bobby Dee, Dakota Moondog, Dave Levinsky, Bobby Collins and Wildman Firpo.

When RCW closed, Broda moved to the Canadian Wrestling Federation, where he resumed his feud with Collins for the CWF junior heavyweight title. The two had a series of loser-eats-dogfood matches in mid-1997.

Aside from being an all around nice guy in the business, Broda possesses the uncanny ability to fart at will, often in the faces of his opponents. Broda must also hold the world’s record for most times soiling himself (both wittingly and accidently) in the ring. He is very proud of both of these feats.
Dave Levinsky, Wpg. Mb.

Ron Broda was one of the first guys I met when I started as New Brand’s play by play man in 1980. He was a great character and in my travels, his name has come up from coast to coast. Everyone from Lars Anderson to Tim Flowers to Dan Denton respected Broda. I saw Ed Moretti in Jan. 01 at an ECCW show and we talked about the New Brand days when Ed came in from Tomko. A group of young boys who had only seen an old and slow Broda on my River City tapes circa 1994 listened in disbelief. Broda was so good in the New Brand days, Moretti himself would watch Broda’s matches and marvel at how he could control a house. All of us who wrestled in Manitoba ended up working Ron at one time or another. When I first promoted Can-Am in 1988, Ron handled the ring for me, put me over in the middle, and even accepted 100 one-dollar bills as his final payoff when I tried to rib him. The next year when the idiot Commissioner complained that Broda was even booked on my TV pilot (“too old”), I immediately set about with Dave Pinsky to ensure Broda won the Battle Royal, and sure enough, 100 kids flooded the ring to do “the Cavedance.” Ron was always a very decent person and has one of the largest coin and hockey card collections in Canada.
Dr. Marty Goldstein

The first wrestling match I ever officiated was back in 1994 on an Independent card in Winnipeg and featured Caveman Broda. I was advised in the locker room earlier on that Broda would try and make me laugh and the best thing to do was to just bite my lip. It was a great match for me to be broken into because I got the opportunity to learn firsthand how to stay on my toes in the ring. I also got to see how he can work the crowd and get the audience behind him like it was nothing. After that period I didn’t see him again until 4 years later behind the curtain at an Action Wrestling Alliance card I was officiating and I was very impressed that he remembered me previously. Even though he’s a veteran of the wrestling scene (especially in Central Canada) he would always take the time to talk to all of the workers (new and old) and take time to meet the fans no matter what. For that he is a class act and I enjoyed working with him and having the opportunity to meet him.
Shawn O’Grady