Wrestling was one of Michel Normandin’s many jobs

It wasn’t just one sport that made Michel Normandin the best-known French language sportscaster in Canada in the ’50s and ’60s – it was many of them, including pro wrestling.

Normandin started his broadcasting career in 1935. Here are but a few of the highlights of his career:

On top of all the ‘legitimate’ sports broadcasting (which he once estimated took up 15,000 hours preparing and delivering sportscasts), Normandin was the broadcaster for the Dow Brewery-sponsored wrestling shows based out of Montreal during the 50s. 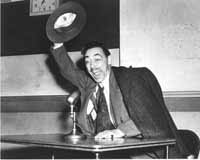 From his position in both the hockey and wrestling world, he saw two of the greatest athletes ever from Quebec compete at their bests – hockey’s Maurice ‘The Rocket’ Richard and wrestling’s Yvon Robert.

Normandin died at age 50 in Montreal on November 12, 1963 at Hotel Dieu Hospital from a heart attack.

While doing a broadcast one Wednesday evening he was calling a match between Wild Bull Currie, who indeed epitomized the Wildest Look and some Pat OConnor…..Currie was ejected from the ring and began to ‘tear up’ the area……..Pierre Normandin, a super person and a grand gentlemen… une homme noblese si vous voulez….. abandoned his native french and blurted in extremely good english….. ‘Get that bum the H— out of here’…….and french TV was never the same.
Pierre Normandin passed away and will long be remembered by all of us.
The BEAR, a.k.a. Bill Conlon

As the announcer on the French Television network, when TV first appeared in Montreal in the 50’s, He was the man to brought ” La Lutte de Mecerdi Soir” to everyone tuned and in those day with one station-Everyone was tuned in.
The program was live from the Montreal Forum and lasted until the evenings semi-final, every once in a while, we would be treated to a small portion of the semi-final match.
The Canadian Wrestling Hall of Fame has some GREAT names, I saw this one and just to recall the early days in Montreal in the 50’s
David Delcloo, Kingston, ON