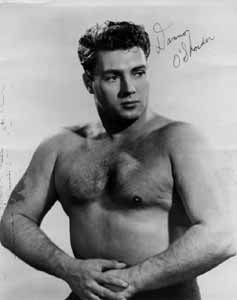 Born in Scotland, raised in Hamilton, Ontario, Danno O’Shocker was one of the top wrestlers in the world in the 1950s and 1960s.

He was introduced to pro wrestling during his stint in the Royal Canadian Navy during World War Two. After the war, he married Jean in Halifax and moved to Hamilton. Soon he was being booked around southern Ontario and New York State.

In 1951, he quit his job and took up pro wrestling full-time. His big break came in Chicago, where he was dubbed Danno O’Shocker and given a false Irish background. He began a well-respected wrestler in and out of the ring. Promoters relied on him to teach newcomers — like Wahoo McDaniel and Bruno Sammartino — the ropes.

O’Shocker died in August 1997 of pneumonia in California.