Silent Brian Mackney is best known for his silence. 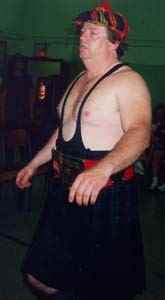 The Hamilton-born Mackney is mute, you see.

It didn’t stop him from getting into the pro wrestling game, however.

He started wrestling in 1972 under the guidance of Love Brother Johnny Evans. Mackney had always been a wrestling fan, particularly of Johnny Powers.

During his 26 years in the business, he wrestled in the U.S., Japan, Canada, often dressing in kilts to show off his Scottish heritage. Mackney was primarily booked out of Frank & Jack Tunney’s Toronto wrestling office.

Mackney was really never more than an opening match wrestler, but was a well-known figure around the southern Ontario wrestling circle.

About the only memories I have of “Silent” Brian are those of watching him get pummeled almost every week on the WWF’s “Maple Leaf Wrestling” show during the ’80s. Though my friends and I joked about his apparent ineptitude in the ring back then, I now have a newfound respect for the man, knowing that he is mute, but still managed to become a pro wrestler in a big-name promotion. I had always wondered why Brian was “Silent”…now I know, and all I can say is, “Well done.”
Sean W.

I remenber every Saturday I would watch Maple Leaf Wrestling on CHCH (now known as OnTV) in the mid 80’s and seeing Brian Mackney getting the crap kicked out of him week after week. Most of the matches resulted in the Silent One getting pummeled without as much as one move on his part. But there was one match in particular where Brian faced Terry Funk and he managed to mount a comeback. He actually woke the crowd up and they (the Brantford wrestling fans) were cheering and going nuts because all Brian was known for was being a punching bag. Anyways, his comeback was short lived as Terry Funk put out Brian with his finisher ….The Sleeperhold. I can’t remember any wrestler on that program who had the tar beat out of him more then Silent Brian. I don’t know who made me laugh the hardest Johnny K-9 or Silent Brian.
Yardape_99
P.S. Brian didn’t seem to have a fondness for the sun. In the winter he was sooooo pasty white and in the summer he had a farmer’s tan. Man that guy made me laugh.

Brian Mackney A.K.A Punching bag
I really admire the heart of Brian. Yes he made me laugh a lot in the Brantford wrestling days, but he went in there week after week and got demolished. What I really remember is his wild hair. Big bushy hair and a part at the side.
I wonder what he’s up to today? I say bring back “the silent one” one more time,say against the “Rock”.
But thanks for the memories and the heart of a lion Brian.
Kevin Galloway

Of all the horrible punching bags I have ever witnessed, Brian Mackney has to be one of them. In the 15 years that I watched him wrestle, I don’t think that he even came close to winning a bout. I think that the man has one of the worst winning percentages in all of pro wrestling. The only tan that Brian ever received was from the hot, bright lights that shone down while he was lying on his back in the middle of the ring.
Mackneys’s bouts were grouped into two categories: horrible and brutal. A horrible Mackney bout would consist of him throwing one punch or missing a flying dropkick and lasting under 2 minutes. A brutal bout occurred when Mackney lasted over 2 minutes, which did not occur often! Opponents like the late John Studd, King Kong Bundy, Paul Orndorff, Ox Baker, The Original Sheik, and Brute Bernard usually used poor Brian to wipe up the floor. Mackney’s greatest claim to fame in wrestling was probably his “acting career”. Silent appeared in the classic 1978 wrestling cult movie “Blood and Guts”. He joined fellow wrestlers Reginald Love, Terry Yorkston, Danny Johnston, and Farmer Pete in this Canadian “classic”.
Thanks Brian for giving me many laughs over your wrestling career!…
You also made my all time punching bag top ten!!
1. Frankie Williams
2. Alex Girard
3. Brian Mackney
4. Jim Waddell
5. Rudy Diamond
6. Jeff Craney
7. Tim Gerrard
8. Big Mac
9. Bobby Blaine
10.Lee Wong
Robert B.