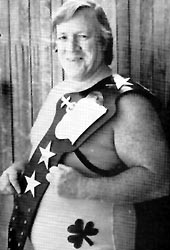 Paddy Ryan began his wrestling career in the 1950’s, originally billed as Bud Freeman. He travelled the world under that name including success in Germany.

In Japan, he was The Zebra Kid.

Upon returning to Canada from Japan in the mid ’70s, he picked up the name Paddy Ryan.

Ryan liked to help out young wrestlers like Greg Lake and was a mentor at the end of his career in the early ’80s in Al Tomko’s All-Star Wrestling out of Vancouver.

He always had time for the fans, and handicapped children were the ones that really touched his heart. When they were brought to the matches in their wheelchairs, he would often come out before his matches to make sure they got the autographs and pictures they wanted.

Ryan retired from the ring in 1982, and passed away on December 28, 1989, in his home in Port Moody, BC from an apparent stroke which lead to a massive heart attack.

Thanks to Jeff Freeman, Paddy Ryan’s son, and Lance Baldwin for help in compiling this bio.

I remember watching Paddy Ryan on Saturday morning tv. The kids in my Junior High Class were all jealous because our family knew him really well. He told us once that he didn’t get along with the promoters very well because there was so much politics as to who got placed on the top of the card……..our whole family misses him very much.
lanceb36

I met Paddy years ago in a bar in New York. He was a really swell guy. We like talked for a while and I found him really interesting. He gave me his autograph and I went home a happy person. That’s all I’ve got to say about the notorious Paddy Ryan…
Kara McGrath