Ron Ritchie had a rich run in wrestling

Trained under Tony Condello in his hometown of Winnipeg, Ron Ritchie debuted in 1978. At 5-foot-11, 235 pounds, Ritchie wasn’t a big man by any means, but was a solid grappler.

A mainstay in Stampede Wrestling, a carpenter for the AWA in Winnipeg, a decent career all-around.

His first success came in the old Central States area, based out of Kansas City. Ritchie held the tag titles there in 1983 with ex-CFL player George Wells.

In Stampede, he held their top belt, the North American title, in 1986 when he beat Kerry Brown and lost to Strangler Steve DiSalvo two months later. Ritchie also held the Stampede tag titles with Leo Burke in 1986.

In the late 80s, and early 90s, Ritchie was a regular with the CNWA in Calgary, the promotion that followed Stampede. He held their heavyweight title during 1990 and 1991.

Ritchie has since retired from pro wrestling and currently resides in Calgary. 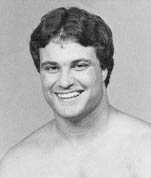 I was always a big fan of Ron’s when he worked the Mid-Atlantic. His matches were consistently among the best on TV.
It would have been nice to see him get his push in Stampede.
Red Jones

I saw Ron Ritchie’s first match. He came in for Al Tomko. I remember him working with Gene Kiniski on Vancouver TV. Kiniski legitimately split his head open with a headbutt.

Ron was very cool in the ring. He seems to have started in the AWA around 1979 ( Minnesota/Winnipeg), moved to the Mid-atlantic area in the in the early 80’s ( also Maple Leaf Gardens in Toronto). Was in St. Louis in 1983, and was in a main event 6 man tag match involving Hulk Hogan. Back in Montreal around 1986-87 for International Wrestling, then on to Calgary Stampede in the late 80’s, getting some main event shots against the likes of Harley Race.

Ron Ritchie had a run as the North American champion in Stampede for a couple of months, around about 86 or so. He was the top face in the promotion at the time, wrestling the likes of Honkytonk Wayne, Kerry Brown, Steve Disalvo, Makhan Singh, Ron Starr and Bad News Allen. As far as I know, that was the biggest push he got, and he seemed pretty popular. He wrestled in Montreal after that, and when he returned to Calgary he was back on the bottom of the card.