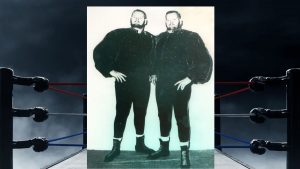 The twin tag team of Hurricane & Cyclone Smith were well-known in the Southern Ontario wrestling scene during the 1950s and ’60s. The duo was usually billed from Red Deer, Alberta due to their red hair, and wrestled across North America.

The Grimbly Brothers used to caddy for Whipper Billy Watson and Pat Flanagan. It was Watson that got them training with Jimmy ‘Red’ Sim in 1954.

“In our day, it was an exhibition of skill and talent, but it was respectful,” Bob Grimbly (Cyclone Smith) told the Hamilton Spectator newspaper in October 1999. “You had some guys who did some dirty tricks because I was one of them. It was the only way to make money. You go out of your country and be the bad guy.”

Before becoming a regular tag team partner of his brother, Bob wrestled as Suicide Smith, a German, in California.

In 1962, Maurice (Hurricane) had his wrestling license revoked when he was diagnosed with a heart murmur. Maurice later focused on his job with Dofasco in Hamilton and became a devout born-again Christian. While his brother Robert/Bob (Cyclone) joined the local police force.

In their elder years, the two twins lived at the Queens Gardens Long Term Care Facility in Hamilton, where they were popular amongst the other residents and almost celebrities in their own right at the home.

Sadly, both brothers passed not too long removed from each other, as Maurice (Hurricane) died on February 17, 2016 and Robert/Bob (Cyclone) died on April 1, 2017. Though their time in the ring was cut short, the Smith Brothers and their real-life counterparts, the Grimblys, have left a lasting legacy on the lives and hearts they managed to come across. One of the first real-life “twin tag-teams” in professional wrestling, the Smith Brothers are a pair of unsung heroes both in the ring and outside of it.

Well I would like to say the twin wrestlers Cyclone — Robert Grimbly; Hurricane — Maurice Grimbly are my uncles and I was just looking them up with him and he is very happy that him and his brother are very well remembered.

Maurice Grimbly joined Dofasco in the late 50s, before his heart murmur was diagnosed. I knew Maurice then. They wrestled as the Grimbly Twins. Red Sim had A motel At Clappisons Corners (Waterdown), and wrestled locally in the 40s, back when Lou Thez was champ, and Whipper was Commonwealth champ. Red’s nemesis was Nanjo Singh.
Jim Mann