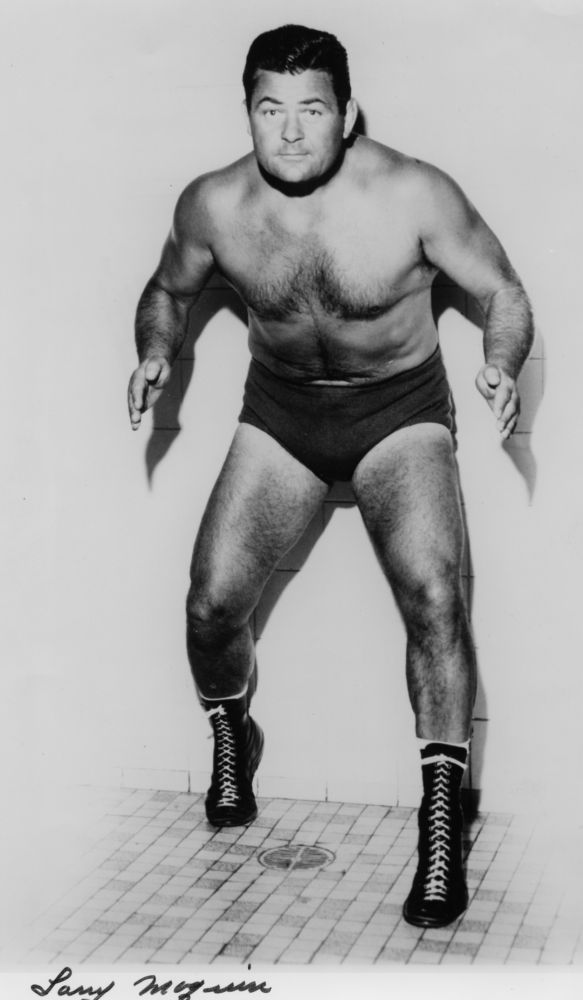 Larry Moquin was Robin to Yvon Robert’s Batman in the Montreal territory from 1942 to 1967. Trained at Camp Maupas north of Montreal under the guidance of Robert, Moquin was extremely skilled and athletically gifted. He had everything it took to be on top — but never quite made it.

“The guy had natural talent, a natural athlete. He played golf good, any kind of sport, but he just didn’t seem to take anything to heart,” said Gino Brito Sr., who wrestled during the later years of Moquin’s career. “Some days he would make moves that would amaze me. He wasn’t in good shape, even at the end, but he could move like hell in the ring. But he didn’t care. Apparently in his prime neither, and that’s why Yvon Robert always remained on top, he was like second banana all the time.”

Canadian Business, in its January 1948 issue, in an article by Andy O’Brien entitled “The Grunt and Groan Business” noted the pairing:

Take, for instance, a team match of a year or so ago in which Montreal’s French-Canadian favorites, Yvon Robert and Larry Moquin, were sent in against the storm Dusek brothers from Omaha. Sharkey was pressed into service as referee.

About 50 per cent of the gross gate was divided among the grapplers. Robert, whose income hits the $40,000 bracket and Moquin, a former $12-per-week RCA Victor handyman and now garnering $25,000 per annum, achieved increased local prestige as well as $1,750 apiece by winning over the notorious Riot Squad of Wrestling. Sharkey drew $800. After paying the Forum rental, supporting performers and publicity expenses, Quinn took home a few thousand for his own efforts.

It should be noted that US media had trouble with his name. the St. Louis Globe-Democrat, in 1948, called him “Larry MoQuin, colorful French-Canadian” and that he is “a former hockey player and one of his chief hobbies is bowling. He owns a large 10-pin alley in Montreal where he also is a main-go grappler.”

Moquin found satisfaction helping out in the office of Montreal promoter Eddie Quinn, and running Hotel Larry Moquin in Ste. Anne de Bellevue until it was destroyed by fire in 1964. After getting out of wrestling, he became a salesman for Victoriaville Hockey Sticks. Moquin died December 12, 1988 from cancer at age 65.