Though not necessarily a household name to all of Canada, Omer Marchessault was a major part of the Montreal wrestling scene right up to his death. He turned to pro wrestling shortly after failing to make the 1934 Canadian Olympic team for the Berlin Games. Marchessault wrestled for 14 years, mostly part-time.

The rest of the time, he worked as a firefighter, and the down-time at the firehall provided the perfect opportunity for him to sculp his figure in the gym. He was in such great shape that he was named Mr. Canada in 1950. For a while, the fire department as uncomfortable with Marchessault’s other profession and they wanted him to wear a mask. And so was born the Masked Marvel, a heel to counter Marchessault’s old babyface gimmick.

“I suppose I had to wear the mask,” he told a Montreal newspaper in 1989. “I was fire lieutenant in Montreal at the time and it was bad enough that I was a professional wrestler. But wrestling as a villain … well, that was simply unacceptable.”

Marchessault worked for the Montreal fire department from 1938 to 1969.

After retiring from wrestling in 1951, he took up refereeing, which he did for 24 more years, and more than 10,000 matches around Montreal and rural Quebec. Marchessault retired from refereeing in 1975. 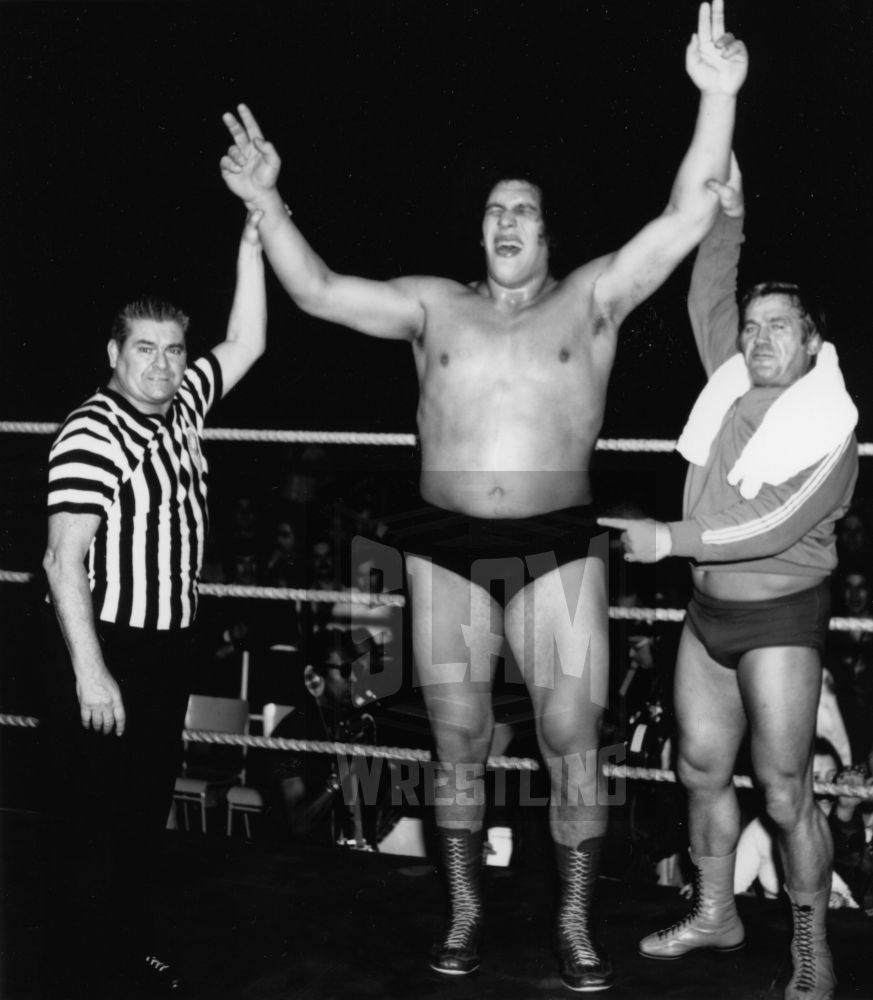 Omer Marchessault as a referee with Andre the Giant and Edouard Carpentier. Photo by Tony Lanza

But he was back again in 1983, when he was hired by the provincial athletic commission to be a timekeeper at wrestling, boxing and kickboxing shows. In September 1995, he was honored by the WWF at the final Montreal Forum show along with Bob ‘Legs’ Langevin for their 60 years of service to pro wrestling in Montreal.

Marchessault died on Boxing Day 1996 after a long illness.

I never saw him wrestle but I met him twice a month for much of the ’80s when he worked at WWF house shows at the Montreal Forum (RIP) as a time keeper. I beamed with pride that retired stars (like he or Edouard Carpentier or Frenchie Martin) could still be seen by adoring fans. Furthermore, Omer got to hold the championship belts while the wrestlers toughed it out in the ring. On the 2nd anniversary of his passing, we salute you! Take care big guy!
Harris Black (Montreal)