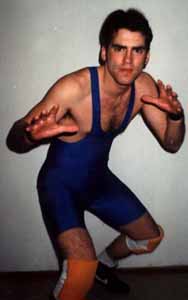 Chad Ripley started off on the right foot in Winnipeg’s River City Wrestling where there was an exceptional roster of independent talent, mostly young ambitious wrestlers with a desire to exceed expectations. However, after only months, RCW closed and Ripley was left in limbo.

Luckily, only months later, the Canadian Wrestling Federation picked up its own schedule and commenced promoting cards from RCW’s home, Chalmers community club. Ripley quickly entered where he became a regular thorn in the side of all “good guys”.

The year he spent with the CWF did wonders for his career as he rose from an inexperienced rookie to a solid mid-card talent, adding a list of titles to his credit on the way. He also toured the Saskatchewan territory with Hardcore wrestling, where he made three successful title defenses of the Canadian Unified junior heavyweight title.

Near the end of 1997, Chad was forced to retire prematurely as he was piledriven from the second rope by Robby Royce, causing soft tissue and cartilage damage in his neck, and compressing two vertebrae. This was a loss to the wrestling world as well as to Ripley. In addition to his involvement with the professional wrestling industry, he was also involved with stunt work, which too was no longer available to him due to his injury.

He will be remembered by his peers as a fearless competitor who never saw any risk as too great in order to deliver your best performance to the fans.

I was there the night Chad had his vertebrae damaged by Robbie Royce. He was then known as Angel McEwan and was teaming with Adam Knight. It was the most memorable match of the night, near the end he was rocked with a suplex that landed him right on his neck, then right afterwards he received a tombstone piledriver from the second rope delivered by Robbie again.
You could tell right away that he was hurt, and Adam was yelling for help as the Chad tried to leave the ring. Robbie was fired from PPW because of what happened, made for an interesting night of wrestling.
Scotty Lynch

I was the in-ring ref the night Chad hurt himself. It was I who transported Chad to the Concordia hospital. Knowing now that Chad is o.k. I can honestly say that it was a terrible bump, and most enjoyable for the boys who were watching. Hey, that’s the business, right?
Dave Levinsky, Wpg. Mb.

I had the opportunity to wrestle Chad Ripley on a number of occasions and I will always remember that he was a man who would take any risk to entertain the fans. His tragedy was truly a lose to the Wrestling world.
Brent Stafford

It’s a great, great pity Ripley’s not wrestling any more. Young men like him are exactly what Sports Entertainment needs – daring, risk-taking, good-looking athletes who can combine stunt work with wrestling and who’ve trained their bodies to endure the grueling nightly punishment their job entails. Too bad it didn’t work put for Chad. Let’s hope there are more heroes like him are on the way.
GW