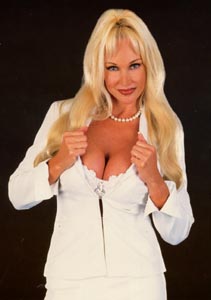 Debra McMichael is a new breed of WWF woman. They’re independent, sexy and tough. They don’t take any crap whatsoever, especially from their male counterparts. By showing a bit of skin and a whole lot of attitude, these women can work the predominantly male crowd into a testosterone-enhanced frenzy better than even the most experienced wrestler.

The era of the Miss Elizabeth-wallflower type manager passively cheering on their man at ringside is as passe as a Flock Of Seagulls haircut. Be forewarned. A kiss on the lips is just shy from a kick in the crotch if you disrespect a woman in the nineties version of the WWF.

And manager Debra McMichael can sure swing one mean guitar. Just ask anyone who’s been left picking splinters out of their noggin’ after she clocked them a good one.

The WWF’s business suit-wearing Southern belle has undergone a transformation from her “beauty queen” persona days managing her NFL football player turned grappler husband – Steve “Mongo” McMichael – in World Championship Wrestling. Since their divorce and her jump to the World Wrestling Federation, McMichael has aggressively stepped out of the shadows and into the spotlight. The beauty and brains behind the veteran tag team of Jeff Jarrett and Owen Hart, she’s more comfortable and confident with her current role in the WWF than she ever was in WCW.

“I love working with Owen and Jeff. I used to work with Jeff in WCW so it’s very familiar ground. With both of them coming from a history of wrestling, I’ve learned a lot. I feel very secure with them. The flow and the chemistry is there,” she said in an interview with SLAM! Wrestling before the WWF SkyDome house show.

On the card, her boys will challenge Kane and X-Pac for the WWF World Tag Team Title straps. Belts they won from the “Corporate Team” of Ken Shamrock and The Big Boss Man in January of this year only to lose them in March to the unlikely combination of Kane and X-Pac.

A straight-shooting McMichael admits being pleased with the changes she’s made in her life following her departure from WCW. She couldn’t tolerate the chaotic atmosphere back then when the booking and the pushes were notoriously snarled by backroom politics. According to her it’s not what you know or what you’ve accomplished that guarantees your success in WCW. It’s who your friends are. Not having to worry about getting herself over and therefore able to focus on the business at hand is a welcome relief.

The difference for McMichael is like night and day.

“You can tell Vince McMahon loves this company. He treats everyone with respect. He knows what he’s doing. He knows how to market you. He knows how to push every character to their potential,” she said. “It’s sorta nice because you as a person don’t have to go…’Oh, God! I’ve got to do this and that to promote myself’. You can sit back and he’ll turn you into a character which will make you and him money.”

With house shows scheduled in Toronto and New York, an autograph signing in Montreal and the Backlash pay-per-view in Rhode Island this weekend, McMichael is gearing up for tough grind though Jarrett and Hart keep her spirits up with their behind-the-scenes antics. 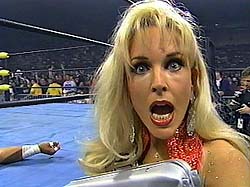 McMichael in her “beauty queen” persona for WCW.

“Owen and Jeff are really funny. At house shows we have so much fun. Like one thing they used to do when we had the tag team belts was right before we’d walk out Owen would make sure he’d stagger behind just so he could pop the belt off Jeff’s waist. Jeff’s more the straight guy, Owen’s the kidder and me…I am just sort of the in-between one.”

Despite a much-hyped contest on the WWF’s Internet site, McMichael confesses that she still hasn’t found a suitable name for her team. One she?s fond of is T and A – standing for “Talent and Attitude” – which she thinks is quite clever. That’s not a bad choice in view of her provocative managerial style. Relying on her feminine wiles, the crafty McMichael has been known to distract referees and opponents by unbuttoning her blouse or showing a little leg.

It’s a truism of life that transcends pro-wrestling. Men are willing slaves to a woman’s beguiling charms.

McMichael is refreshingly honest as compared to other WWF superstars who are quick to go on the defensive once the issue of “mature content” is brought up. She conjures up no far-fetched explanations to justify her character’s actions. There’s no elaborate smoke screens clouding her response. She tells it like it is.

“You know what? It is definitely entertainment. It’s show business and we’re here to make money. Sex sells and that’s just the way it is,” she said candidly. “I mean, look at Baywatch. We don’t watch them for their acting abilities, that’s for sure. You’ve got to have attractive women who show flesh to pull in the viewers…and it does. That’s just the way it is. It’s a money-making game and that’s part of the game.”

She does have her limits though which she says the WWF respects. Case in point, at a house show McMichael was asked to loosen her blouse and fall on top of a wrestler so that her breasts would be exposed but not visible to the audience. McMichael declined to do so. She made her reservations known to the bookers. They dropped the idea without argument.

Although her behavior as the Debra character may be very daring, she insists that the real Debra is not like that at all. McMichael approaches her job as an actor would a regular television series, becoming someone they aren’t to fit a scripted role. She describes her real off-screen self as somewhat introverted, shy and easily embarrassed.

“We all have some of that passion in us,” she explains. “Even though that’s not the real me…it’s in me. I am really too shy to actually act like that but I pull that part of me out to play that character. Personally, I’m more the bubbly type. I don’t walk up to a guy and friggin start hoochy-cooching and all that stuff that I do on television. I don’t go up and start flirting with a guy. That is just not me.”

McMichael even cites her placid personality as one of the underlying reasons she and Mongo decided to get a divorce. “We changed. We were married for ten years and just grew into two different people. We still get along. He’s a bit more wilder than I am. I’m very calm. I know you see that character on television but actually I am a very shy person,” she said. 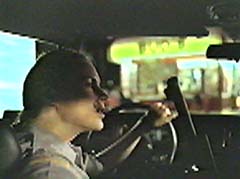 McMichael’s brief appearance as a female cop in Texas Chainsaw Massacre: The Next Generation.

Still, she must deal with ignorant males shouting “Take it off!” or “Show your tits!” which unfortunately are a disgraceful part of today’s live wrestling scene. Mostly, she tunes the cat-calls out separating herself from the person she is portraying. What the audience also doesn’t realize is that she is having a few cheap laughs at their expense. There are many a night when McMichael will amuse herself at ringside by surveying the predictable crowd reactions to her outlandish behavior. In short, the joke’s on them.

What the majority of fans also don’t know is that while her ex-husband was establishing a wrestling career for himself, Debra was studying acting in Austin, Texas. Her hard work landed her a small part in the last installment of the Leatherface – Texas Chainsaw Massacre horror movie series. Initially, McMichael was offered a starring role in Texas Chainsaw Massacre: The Next Generation when another student in her class first balked at the proposed salary. The student later changed her mind snatching away the part promised to McMichael. The producers felt so badly about the situation that they gave Debra a small role as a female police officer.

“We’re talking about such a small part that if you blink you’d miss me,” said McMichael shocked at the mere mention of her Big Screen debut. “That was so funny because that was in ’93 with Matthew (McConaughey) and Renee (Zellweger). Now look at them. They’re big stars.”

McMichael has dreamed of pursuing acting further but is realistic about her chances at joining the ranks of McConaughey and Zellweger. Feet planted firmly on the ground, she sees herself as probably working in the WWF’s public relations department rather than a Hollywood sound stage.

Fame. Fortune. Success. The only thing missing in McMichael’s life is a companion. She’s single, available and still searching for the elusive Mr. Right.

“I work too much to meet a guy. I’m on the road so often so if you know any single men, send them my way,” said McMichael playfully.

Take a number, guys. That line is expected to be longer than the one on Phantom Menace‘s opening day.