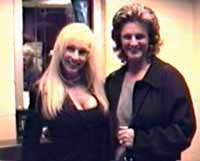 Debra and Joanne Rougeau, promoter for the WWF show in Montreal. — photo by Jason Scoufara

On a sunny Friday afternoon in downtown Montreal, the box office opening for tickets to the May 29th WWF show. Close to two thousand fans lined up at The Molson Center on de La Gauchetière street hours before the tickets went on sale.

Besides the fans’ needfulness for good seats, they was another reason for the immense turn out. Debra McMichael was present at the box office for autographs. Less than 24 hours after a pre-taped segment with her on Off The Record aired on TSN, and hours after she was on the Mix 96 morning news, Debra was utterly fresh on many Montreal people’s minds.

I was fortunate enough to chat with Debra before the autograph session began. Not many questions were left unasked to Debra after a days of dialogue with the media.

In essence, it did not bother her than Michael Landsburg called her ‘Sable’ by accident a couple of times.

“It’s alright, she’s been (Sable) in the WWF since 1996, and at the time I was in the WCW, and they were not broadcasting in Canada, it was virtually unknown here.” said Debra.

She was very pleasant to chat with, in a sincere way, and she seem to be quite happy with everything. With all going well, we should not expect any major changes soon with her character.

The morning was not for the analogy of women’s roles in wrestling or about how sex sells in the media. Rather, it was a illustration of how the WWF has taken good care of their loyal fans in Montreal. A mutual loyalty clearly exists, with hundreds of other cities in North America to chose from, the fans appreciate the WWF’s consistent involvement in Montreal for their shows.

As the clock reached 12pm, Debra finally stepped out to the roars of the near 2,000 fans lined up for show tickets and autographs. Luckily, a big barricade and a complete security team was on duty and in full force.