Louis Laurence is another example of a Canuck that made good abroad.

Sure, he learned the mat game in 1973 at the St. Jean Baptiste centre under the guidance of Pat Girard — who also trained Pat Patterson, Ronnie Garvin, Ludger Proulx and more. And he hit all the Canadian spots like Stampede Wrestling, Lutte International, and Crybaby George Cannon’s Superstars of Wrestling. 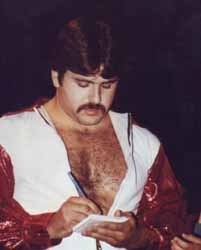 But it was in Mexico that Louis ‘The Farmer’ Laurence was a pretty big star. And England.

In fact, in Mexico, he was actually heavyweight champion for a stint as, appropriately enough, Louis Canada.

Upon returning to his home in Quebec, Laurence fell in naturally with the scene in Montreal, and refereed as Eddy Carson for the last six years of his career for promoters Frank Valois and Gino Brito Sr. before retiring in 1990.

I have a very vivid memory of Louis. It was at a WWF card at the Halifax Forum on February 27, 1988. One of the scheduled matches was to pit “Hacksaw” Jim Duggan against One Man Gang. Well, neither man showed up, which was a pretty common occurrence back then, particularly for Duggan. That match was replaced by Laurence vs. Roger “Bulldog” Vachon. The crowd of about 5000 wasn’t all that excited about the match, since both wrestlers were not all that familiar to the fans, although Vachon did compete in the local summer Grand Prix wrestling promotion for a few years. Both men put on a fast-paced bout, and being a Canadian wrestling fan, I really appreciated the effort they gave. Here were two French-Canadian wrestlers in a WWF ring, and though many fans went to the concession stands or the washrooms, I watched the entire match, which Laurence won with a small package pin. Those who did watch the match rewarded both men with a nice ovation. The main event on that card was Jake “The Snake” Roberts vs. the late “Ravishing” Rick Rude, but in my opinion, Louis Laurence and Bulldog Vachon stole the show that night.
John Greeley

The Farmer was working for International Wrestling (Lutte International) in the mid-eighties and would sometimes job as The Spoiler if somebody didn’t show up. He also use to sell the programs near the box-office and was easily approachable. I asked him why the Spoiler and him were never seen at the same time. He shrugged and said “He’s scared of me” with a slight smirk on his face. Both him and Gino Brito Sr. were easy to talk to and gave a lot of extra stuff to International’s audience. This was one promotion that could have gone real big if it wasn’t for McMahon stealing their big stars like the Rougeaus and Dino Bravo. Lutte International disappeared in 1987. What a pity!
Terry Fielding, Sudbury, Ontario