Hitman Hart: Wrestling with Shadows on the mark 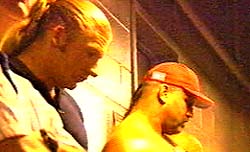 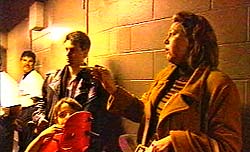 Hitman Hart: Wrestling with Shadows is the best documentary ever done on pro wrestling.

Sure, it’s a small category, but it’s a big look behind the scenes of Bret ‘The Hitman’ Hart’s last months in the World Wrestling Federation, including the screw-job ending at the 1997 Survivor Series.

The world of pro wrestling will never be the same for the hardcore or the casual fan.

That said, it’s a very one-sided look at what happened.

WWF owner Vince McMahon is only heard from through his famous ‘Bret screwed Bret’ interview on RAW. No one slags off on Bret for being unprofessional, high-minded or unrealistic.

Director Paul Jay of High Road Productions sure timed it right. There is no way anyone would have known what was to happen to Hart’s career during that time period — sign a 20-year deal with the WWF (“I’ll be in the WWF forever”), turn heel due to Stone Cold Steve Austin’s emergence, re-form the Hart Foundation (unfortunately, no footage of the reunion), become the WWF World champ again, headline the great Canadian Stampede In Your House payperview, have McMahon ask out of the 20-year contract, sign with WCW (and keep it a secret for almost three weeks!), and finally have the Survivor Series end in massive controversy.

My biggest beef with the preview video that I saw was that there was no mention of Brian Pillman and his tragedy, even though we see and hear him on-screen. Yes, I understand that this wasn’t a documentary on ‘The Loose Cannon’, but his death was certainly a big part of Bret’s life.

The highlight for me was Bret’s wife Julie, in the hallway of the Molson Centre after the Survivor Series, verbally attacking a sheepish Hunter Hearst Helmsley for his part in the controversial finish, reminding him “what goes around comes around.”

The important thing to keep in mind before you watch or order this tape is that it’s a documentary. It’s not a slick WWF or WCW production trying to get someone over. Instead, it’s 105-minute minute into what it is like being Bret Hart — your family, some friends, and the people that you work with.

The director keeps things simple. No jump cuts, no fancy transition shots, a simple use of music.