In the kitchen with Abdullah

There is no more dangerous place to interview Abdullah The Butcher than in a kitchen.Way too many weapons on hand.

And yet, there I was on Sunday talking to The Madman from Sudan in the kitchen at Appleby’s Sports Bar & Grill in Scarborough, Ontario after his autograph session with the Apocalypse Wrestling Federation.

He’s not a big talker, in or out of the ring.

His answers to my questions were sometimes maddeningly short.

How old are you, Abby? 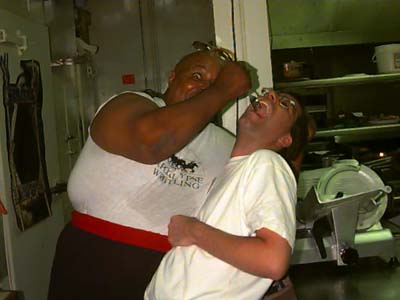 I answered that most people believed him to be over sixty.

He was only in Toronto for one day, and has a brother who lives in town.

Abdullah himself calls Atlanta home these days. He owns Abdullah The Butcher’s House of Ribs and Chinese Food and has some real estate holdings.

It’s difficult to describe being in this legend’s presence. He is, quite simply, huge.

The gashes in his forehead are truly frightening, running from above his eyebrows well to the top of his bald head. He’s dressed in trademark red and black pants that look big enough to cover a small car. He has a white towel with him that you’ll often see draped over his head. And somehow, the promoter has found an Apocalypse Wrestling Federation t-shirt big enough for the Madman.

He doesn’t wrestle much anymore, mainly going “back and forth overseas”.

I really wanted Abby to open up and tell about some stories, but that was not to be.

His favorite memory? “Me and Bruiser Brody. And Carlos Colon.”

How did you get started in wrestling? “I was hungry. You ever been hungry before?”

I heard the ribs were good at your restaurant. “The best.”

What is your favorite foreign object? “A fork.”

In the main event of the AWF debut show, Abdullah faced Pretty Boy Simms, who is best known from the Montreal International Wrestling scene. To no one’s surprise, both bled. Abby used a fork and then went beserk on the ref and AWF commissioner Ron Hutchison.

Just another day’s work for The Butcher.