AEW Rampage: Action Andretti takes down another member of the JAS 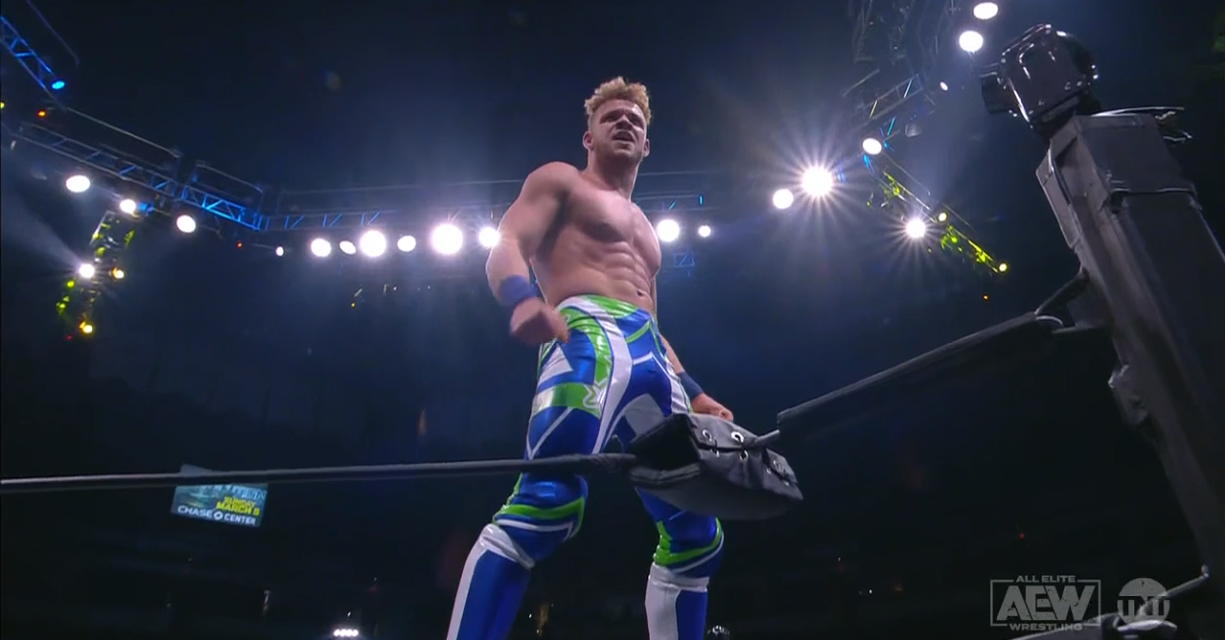 What is AEW Rampage? Sure, it’s a hour long wrestling show, but what is it’s purpose. Most night’s it’s just overflow from Dynamite. This show doesn’t really have an identity. The wrestling is usually good, though, so let’s get to the action.

Chris Jericho on commentary is always good for at least one line a night, tonight he said he hates when people sing along to wrestler’s entrance music.

Page looks to end the match with the Ego’s Edge, pulling JB off the turnbuckle, but Perry is able to escape and deliver a forearm in the corner. The fight spills to the floor, where Hardy and Page exchange words. This allows Perry to connect on a suicide dive. Back in the ring, Jungle Boy hits  a drop kick. Hathaway grabs Perry’s leg and tries to pin it on Hardy. Page slams Perry into the ringside barrier and celebrates with a less than enthused Hardy. Back in the ring, Perry gets a boot up on a charging Page, but still gets dumped to the floor. Jack fights Ethan off with overhand chops, but Page drives him into the ring post. Page follows with press slam in the ring.

After a commercial break, Perry gets caught on a cross body, but is able to break free and hit a lariat. Page decks Perry on the top turnbuckle and power slams him to the mat. Page taunts Perry and looks for the Twist of Fate. Perry fights out and back Page into the corner. Jungle Boy unloads with mounted strikes and takes out Stokely with one punch. The distraction allows Page to slam Perry, but can’t get the three count. Perry is sent to the floor, where they order Hardy to attack. Before anything can happen, Hook walks out and watches from the stage. Page with a roll up and grabs Hardy’ for leverage. Matt slaps Page away, allowing Perry to reverse the roll up. Perry gets the three count.

After the match, Page and Hathaway tear into Hardy. Page then address Perry and Hook and says Hardy will make it up to him. Page challenges Jungle Hook to a tag team match on Wednesday. Hathaway then puts Hardy in time-out like he’s a toddler.

Ortiz is with Tony Schiavone to explain what is going on with Eddie Kingston. Ortiz says Eddie has lost it after falling for the mind games. Ortiz didn’t want Kingston to hit Julia Hart with a chair, as that is a line that shouldn’t be crossed. Ortiz wants to talk to Kingston face to face. Eddie brings a chair with him to the ring. Ortiz doesn’t let Eddie get a word in as he calls him a coward. Eddie has heard enough and lays out Ortiz with a chair shot. Kingston heads to the back.

Willie Mack gets in some offense, but misses on a senton. Cage takes him down with a high kick to the jaw. Cage delivers an uppercut in the corner and tosses Mack across the ring. Cage poses in the middle of the ring. Mack misses a punch on the apron and Cage slams him down. Why is this match still going on? Cage is supposed to face Bryan Danielson on Wednesday? Well, I’m not impressed one bit. Mack with a sit out spine buster and nearly get the three count. Cage blocks a stunner, kicks Mack in the face and plants him into the mat, but still can’t get the pin. Cage hits a powerbomb and follows with knee strike. Cage finally hits the Drill Claw and covers to get the win.

Leila Grey and Jade Cargill vs. The Vanity Twins

Wow, two enhancement talent matches in a row. Cargill hits one of the twins with Jaded and covers to get the win.

Sammy Guevara joins the commentary team. Garcia charges Andretti as the bell rings and puts the boots to him in the corner. Andretti bounces off the ropes and delivers a back elbow. He follows with a chop to the chest. Garcia shoots Andretti off the ropes, but Action hits a head scissors. Andretti drops Garcia to the apron and an enzuigiri sends him to the floor. Action follows him with a suicide dive. Garcia with a clothesline on the floor and slams Andretti into the ring steps.

After a commercial break, Garcia is kicking away at Andretti. Action fights back with an elbow strike. He follows with a back breaker, neck breaker combination. Action goes up top, but Garcia rolls to the floor. Andretti jumps to the apron and delivers a moonsault to the floor. Back in the ring, he hits a split legged moonsault, but can’t get the three count. Garcia catches Andretti bounces off the ropes, looking for the back elbow strike, but Garcia catches him in a rear naked choke. Garcia has to break the hold as Andretti gets him in a pin. Action with a thrust kick and hits a sit out neck breaker. Andretti with chops in the corner. Garcia catches Action coming off the ropes with a palm strike.

Garcia looks to Jericho and Sammy for advice. Daniel wants the Dragon Tamer, but Andretti counters into a pin. Garcia chops Action and rolls him up, but even grabbing the tights can’t get the pin. Andretti with an elbow strike. He goes up to and delivers a tornado knee strike. With Garcia down, Andretti hits the running shooting star press. Action covers and gets the three count.

Guevara and Jericho can’t believe what happened. That’s the show.

Two of the four matches tonight featured enhancement talent. Jungle Boy and Ethan Page put on a good match while furthering the story of Matt Hardy being owned by the Firm. Daniel Garcia and Action Andretti had a very good bout that is worth checking out. The rest of the show you can skip.