Mat Matters: We put AI bookers to work and here’s what happened 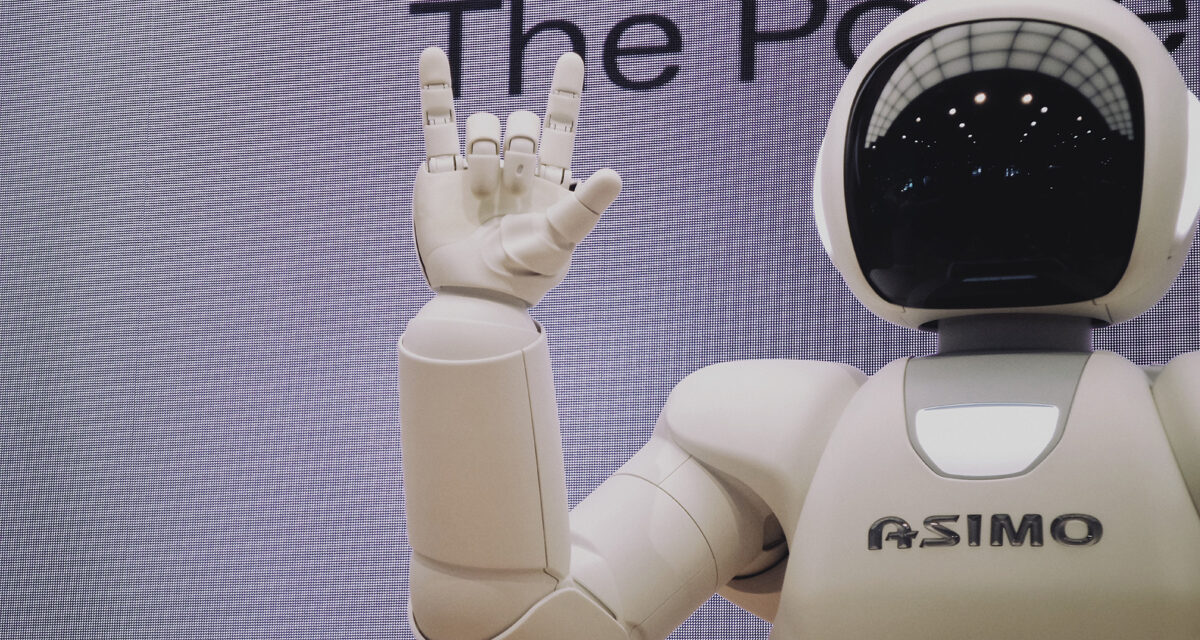 There is an old adage that: “Give 1 million monkeys 1 million typewriters and they’ll eventually type the entire works of William Shakespeare.” This veteran journalist scoffs at such a notion as I would argue animals or current computer AI — artificial intelligence — don’t have the ability to understand the nuances that make any written work, a painting or a sculpture great. They also will never be able to replicate that “spark of inspiration” or the way an idea will just “pop into your head” completely out of nowhere… just like how I am stringing these words and thoughts together right now.

One could argue though that those “million monkeys” with enough practice and  guidance might be able to script a wrestling show better than AEW and the WWE are doing at present. I mean, with Dynamite’s ratings plummeting and HHH’s team only being able to increase Raw’s viewership by 2.3% and sinking Smackdown’s by 2.4% overall, they couldn’t do any worse could they?

Since SlamWrestling.net doesn’t have a million monkeys at our disposal, I have decided to tap into the next best thing: the online AI experiment, OpenAi. For those who don’t know OpenAI is “an AI research and deployment” company whose “mission is to ensure that artificial general intelligence benefits all of humanity.”

At present, you can login to their system and ask their AI questions, chat with them or have them even create art for you.

With that in mind, I asked my pal OpenAI to write a promo for Ricochet. Here is what it came up with:

I am the King of the Cruiserweights, and there isn’t a wrestler in the world who can match my speed and agility. I am a human highlight reel, and every time I step into the ring, I bring my A-game.

My opponents may underestimate me because of my size, but they soon realize that I am a force to be reckoned with. I am a daredevil, and I will stop at nothing to win.

So if you want to see some real wrestling entertainment, then you need to see Ricochet in action. I promise you won’t be disappointed. Because when I hit the ring, I bring the thunder, and I leave my opponents seeing stars. So step right up, and get ready to be amazed by the incredible Ricochet! 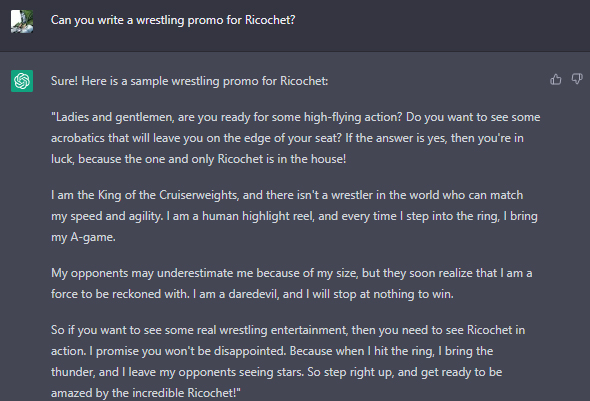 Not too shabby, eh? You could say that it lacks some of the things, the nuances that make Ricochet, well, Ricochet, but isn’t too bad all things considered.

How about an interview segment between Tony Schiavone and Dr. Britt Baker, DMD? Here is what our workhorse OpenAi cranked out in less than a minute:

Tony Schiavone: Welcome back to AEW Dynamite, where we have a special treat for our viewers tonight. Joining me at ringside is none other than Britt Baker, one of the top wrestlers in the women’s division. Britt, thanks for joining us.

Britt Baker: Thank you for having me, Tony. It’s always a pleasure to be here.

Tony Schiavone: Britt, you had a big win last week over Nyla Rose. Can you tell us a little bit about that match?

Britt Baker: Yeah, that was definitely one of the toughest matches I’ve had in a while. Nyla is a formidable opponent, but I was prepared and I was able to come out on top. It was a hard-fought victory, but I’m just glad I was able to get the win for my fans and for myself.

Tony Schiavone: You’ve been making a big impact in the women’s division recently. Do you have any goals or aspirations for the future?

Britt Baker: Definitely. My ultimate goal is to become the AEW Women’s World Champion. I’ve been working towards that for a long time and I believe that with hard work and determination, I can achieve it. I also want to inspire and empower other women in the wrestling industry and show them that they can accomplish anything they set their minds to.

Tony Schiavone: Well, those are certainly admirable goals. We’ll definitely be rooting for you to achieve them. Is there anything else you’d like to say to your fans or to your opponents in the ring?

Britt Baker: Just that I appreciate all of the support from my fans. They mean the world to me and I couldn’t do this without them. And to my opponents in the ring, bring your best game because I’m coming for the top spot and I won’t stop until I get there. 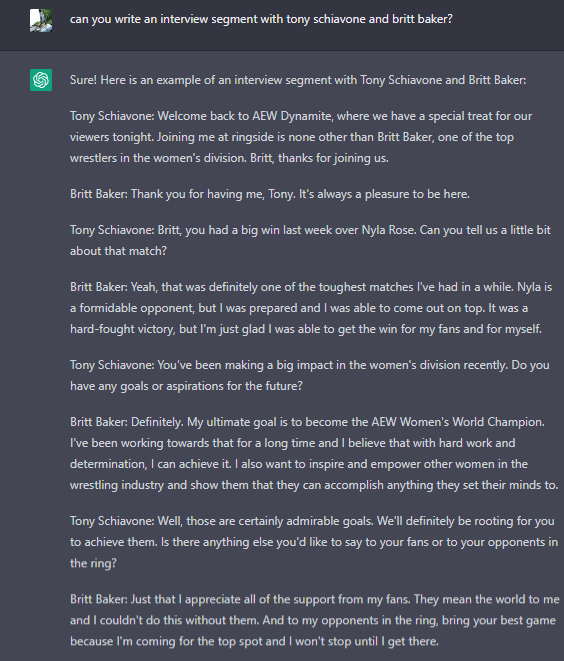 Once again, the back and forth is okay but there isn’t much personality nor anything you can point to that is truly how Britt Baker speaks or how her persona would. It is just a generic promo, which could work with a little “massaging”… as us editors like to say.

How about an episode of an entire wrestling program? OpenAi has got us covered.

Sure! Here’s an episode of AEW Dynamite I came up with:

The camera pans around the packed arena as pyrotechnics go off and the sold-out crowd erupts in cheers. Jim Ross and Tony Schiavone welcome the viewers to another exciting night of AEW Dynamite.

The first match of the night is a singles match between “Hangman” Adam Page and “The American Nightmare” Cody Rhodes. The two wrestlers put on a thrilling back-and-forth match, with both men hitting a number of impressive moves. In the end, it’s Cody who comes out on top, hitting a Cross Rhodes on Page for the win.

Next up is a tag team match between The Young Bucks (Matt and Nick Jackson) and The Lucha Bros (Pentagon Jr. and Fenix). The high-flying action is fast and furious, with all four men pulling out all the stops. In the end, it’s The Young Bucks who pick up the win after hitting their signature finisher, the Meltzer Driver, on Fenix.

After a commercial break, we see a video package hyping up the main event of the night: a triple threat match for the AEW World Heavyweight Championship, featuring current champion Jon Moxley, “The Cleaner” Kenny Omega, and “The Exalted One” Brodie Lee.

The main event is an intense and hard-hitting match, with all three men pulling out all the stops. Moxley and Omega go back and forth, with Lee trying to get involved whenever he can. In the end, it’s Moxley who manages to fend off both challengers and retain his title, hitting a Paradigm Shift on Omega to get the win.

The show ends with Moxley standing tall in the ring, holding his title belt high as the crowd cheers. Jim Ross and Tony Schiavone bid the viewers farewell, promising even more exciting action next week on AEW Dynamite. 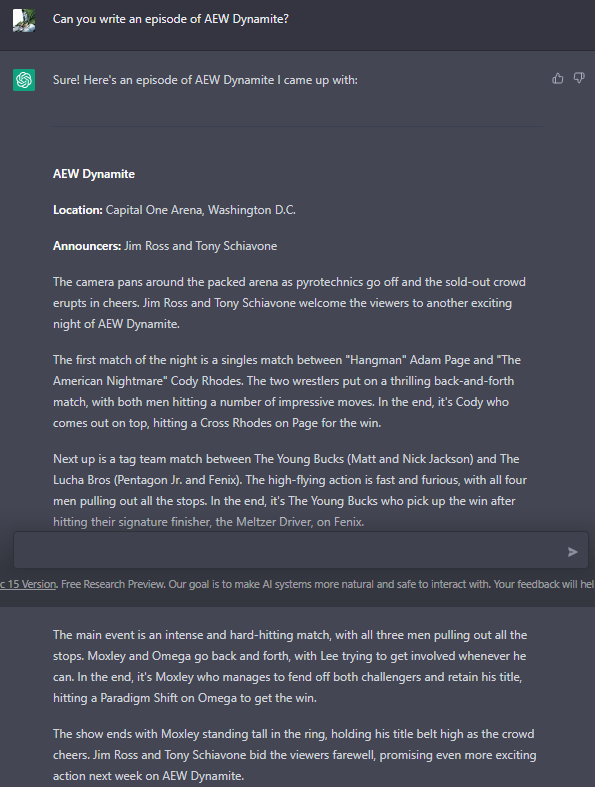 Well, that covered some of the bases but seems a little lacking when it comes to accuracy, timeliness and that details that make any show or any piece of writing just “sing” or speak to us as viewers.

When it comes to art work OpenAI’s DALL.E.2 also needs a little bit of work…

Here is what it churned out when I asked it to generate a poster for a WWE movie.

So what is the result of this little experiment? AI is obviously still in its infancy and has a long way to go before we have to worry about SkyNet launching a nuclear attack or HAL malfunctioning while on a mission in outer space. It lacks the ability to think outside the box, to present something that has a soul, character or a voice. It would also probably take far too long to program or instruct it with all the variables, all the personalities, all the requirements for it to write an entire wrestling broadcast with any accuracy or coherency.

Like the tech in our laptops, phones, desktops and even television sets, computer processors are really good being told what to do, following a set of instructions or completing repetitive tasks for us humans. As for the world of art, I don’t think any writer, painter or designer has anything to worry about but you have to wonder if before too long AI systems will be tagged in by delinquent high school students who need an essay on the historical impact of the Quebec Referendum on Canada by Monday morning.