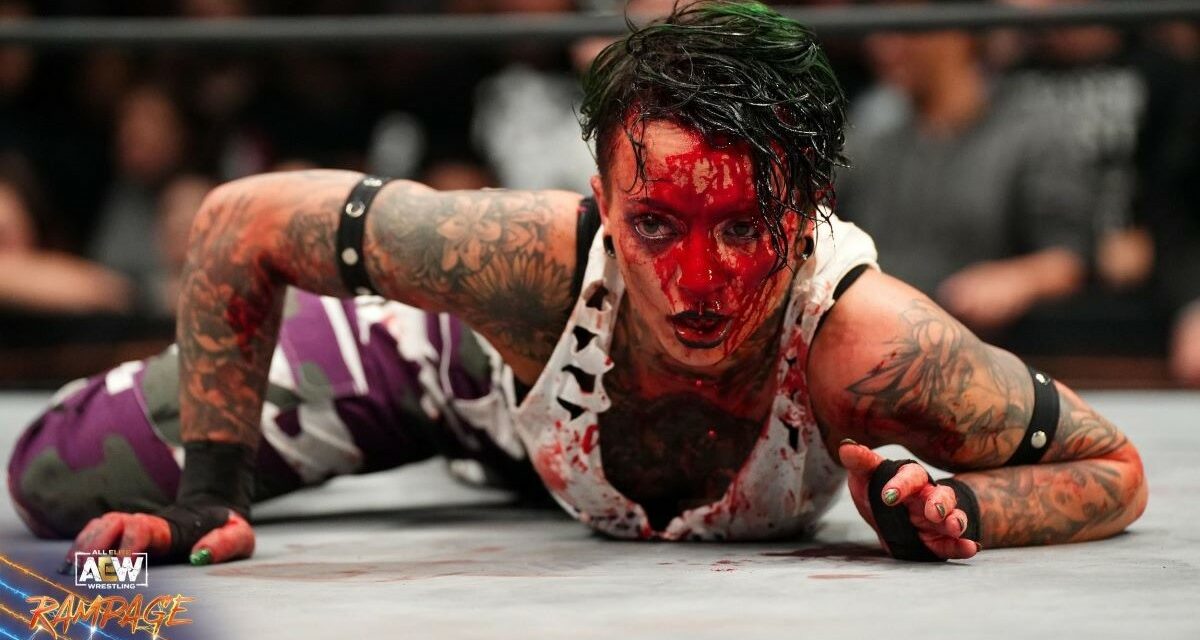 Due to circumstances beyond the author’s control, this will be an abbreviated recap of  AEW Rampage held at the Kia Forum in Los Angeles, CA.

Robinson was dominant throughout the match, but a couple of ill-timed moves allowed Allin to make his patented comeback. The big move of the night had Robinson clothesline Allin as he was crotched on the top rope and he took a sick-looking bump.

Allin reversed a superplex into an avalanche Scorpion Death Drop and then the Coffin Drop secures the win to retain the belt. After the match, Sting came out to celebrate his win.

Powerhouse Hobbs read another chapter from his Book of Hobbs, about how he broke the Phoenix’s neck and took his ashes and will spread them all over the people he hurts.  I don’t know if it’s poetry, but it’s a compelling theme.

Renee Paquette brought out The Acclaimed and “Daddy Ass” Billy Gunn. Apparently Hollywood loves The Acclaimed, and they were going to do handprints to celebrate, but The Gunn Club interrupted claiming they were the only big stars. Billy let his sons have fun (*wink wink*) and wanted them to put their hands in the cement. As their backs were turned, Caster and Bowens pantsed the Gunns in front of the whole Forum.

Renee Paquette was backstage interviewing Swerve Strickland with hip-hop artists King Combs and Quincy (ask your kids who they are, folks), and he promises that Mogul Affiliates will be the most violent group in AEW in 2023.

Kings of the Black Throne (Malakai Black and Brody King) vs. Eddie Kingston and Ortiz.

Ortiz and Kingston were not on the same page, and King and Black took full advantage of that fact.  Kingston wrestled most of the match and waved off any tag attempts Ortiz tried to make.  Matthews and Hart came out with a steel chair, but Kingston stopped that in a hurry.  He started to tee off and almost swung the chair at Hart, but Ortiz held him off. Black used the opportunity to deliver the Black Mass to Kingston and he secured the win.

Afterward, The House of Black “congratulates” Ortiz for his involvement, sowing more seeds of discord between him and Kingston’s friendship.

Lexy Nair was backstage with Jade Cargill and Leila Gray about the dissension in the group with Red Velvet.  Cargill dismissed the matter, claiming that Nair should discuss her upcoming 50th win.  Far as she’s concerned, Velvet’s out of the Baddies, and Gray wins by default.

Paul Walter Hauser, who won a Golden Globe for his work in Black Bird, and he and Danhausen play up the crowd by talking about a “Golden Globe-hausen.” Jeff Jarrett, Jay Lethal, Satnam Singh, and Sonjay Dutt come out to break up the fun.  Hauser had the best zinger of the night as he pointed out that Lethal, Dutt, and Singh looked like they were “dressed for a homeschool prom.”  Jarrett lays him out with the guitar, and they prepare to do the same to Danhausen until Best Friends and Orange Cassidy chased them off, but they absconded with the Golden Globe award.

Of course, you realize, this means war.

That brings us to the main event of the night…

This was a brutal match from the word go, with Soho quickly displaying the ruby crimson mask.  On a scale of one to Muta level, this was at least a nine.  Some other spots during the match had Anna JAS use barbed wire wrapped around her arm against Nightingale for the Queenslayer, but Soho broke up the submission with a chain to her forehead.

Another moment had Melo and Ana attempt a superplex on Soho to a stack of chairs in the ring, only for Nightingale to come from behind and all four women hit the Tower of Doom onto the chairs and that brought out an “EC-Dub” chant from the crowd.  Nightingale took Anna to the top of the ramp and she nailed a powerbomb to a table at the bottom, only Anna missed all of the table and her back got most of the concrete floor.  Meanwhile, Melo hits a Gotch-style piledriver to Soho from the ring apron to the table below.  She gets a little cocky as she brings thumbtacks into the ring.  She attempts to press her face into the glittering implements, but Soho fights her off.  She drives Melo into a chair headfirst in the corner and then delivers Destination Unknown into the center of the tack-strewn ring for the one, two, and three.