Impact: James’ Last Ride and a War of Words between Ray and Alexander 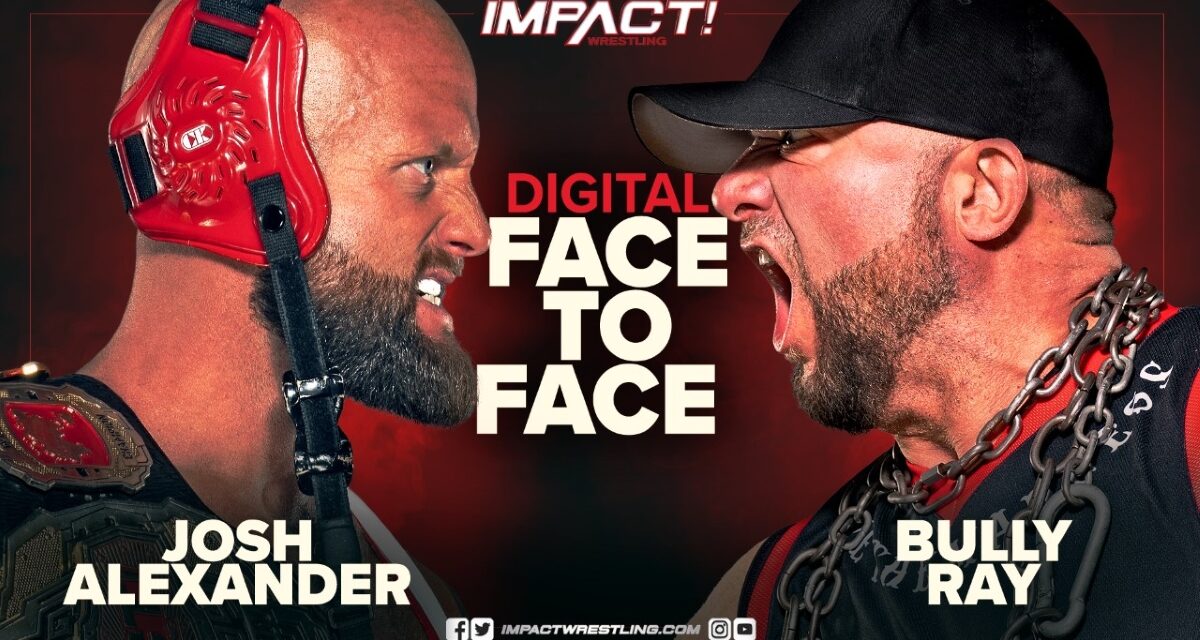 Greetings and Salutations! I am back with the Impact report for the week. We are a night away from the Hard to Kill PPV and I for one and super excited for Josh Alexander vs Bully Ray and Mickie James vs Jordynne Grace. Those are the two best hyped matches and some could consider this a two match card. I think that while the undercard wasn’t as well built, it will be a fun show with great in-ring matches. Well, without further ado, let’s get to it!

We see a recap of Scott D’Amore being powerbombed through a table last week. We also see all of the events of D’Amore and Impact World Champion Josh Alexander leading into this week. We also see Bully Ray mixed in.

In a very low budget hard to follow interview segment, Josh Matthews interviews Bully Ray and Josh Alexander from their respective homes where they were forced to be until Hard to Kill. Josh Alexander mentioned that Ray is taking out those close to him and admitted that by doing so, Ray has gotten to his head.

Ray made the exaggerated claim that D’Amore hit him first and thus he was justified in putting him through a table. Ray then admitted that he has played Alexander into choosing a match that he invented. Ray said he used chairs, tables, ladders on Alexander and those he’s taken out recently so that Alexander was goaded into accepting the Full Metal Mayhem Match.

Everything @bullyray5150 has done has been guiding @Walking_Weapon toward demanding a Full Metal Mayhem match – a match Bully Ray invented. #IMPACTonAXSTV pic.twitter.com/4EJ1m3aIgy

Ray promised Alexander that he would bring the pain and that he would make him feel pain he’s never felt before. Alexander said that talk is over and we will see who leaves as champion at Hard to Kill.

The match started with both men looking for the advantage but eventually Heath got Myers in the corner and began to beat him senseless. Myers stumbled in the middle of the ring a la Flair. Rhino and Cardona tried to get themselves into the match but the referee ejected them. Myers hit a flying forearm on the floor then followed that u with a chin lock on Heath and ended this array of moves with a choke using the ropes on Heath.

Myers was able to slowly come back as he did an implant DDT for a 2-count. Myers got a nice looking spear in for a 2-count of his own. Myers then climbed the ropes and Heath ran up to hit a huge powerslam. Heath, still in control and both men once again on the ropes, tried to go for a super plex but Myers shoved him off the roped and hit an elbow drop for another 2-count. Myers thought the count was slow so he argued with the ref but Heath got up quickly and hit the Wake Up Call for the pin and the win.

In the back, Chris Bey and Ace Austin talked about how well they did at the NJPW Super Junior Tag League. In fact, they made it to the finals. They said that Impact officials were so happy that they said they deserved to tbe in the 4-Way elimination match for the Impact World Tag Team Titles at Hard to Kill.

Jessika went to Rosemary and mentioned that Taya Valkyrie was taken out. Taya was on the ground crying when Jessika and Rosemary went to her. Taya gave her tag title to Rosemary to go and defend it. Taya also said that she thinks it was Gisele Shaw, Jai Vidal, Savanah Evans, and Tasha Steelz that attacked her.

We’re going to cut their heads off and display them on pikes..#DeathDollz #IMPACTonAXSTV https://t.co/wpZeVp4SPO

Early in the match, Rosemary bit Evans in the face. Rosemary then followed that up with a crossbody on the outside of the ring to Evans and Vidal. Once everyone got back up, Vidal distracted Rosemary and Evans hit a big boot on her. Evans hit a butterfly suplex on Rosemary. Everyone started distracting the ref and there was a lot of back and forth but eventually Evans hit a Full Nelson Slam on Rosemary for the pin and the win.

A chaotic scene at ringside opened the door for @SavannahEvansNV to pick up a victory over @WeAreRosemary. #IMPACTonAXSTV pic.twitter.com/KH0K9SlrLF

After the match, Shaw, Steelz, Evans, and Vidal beat down on Jessika and Rosemary until they got bored and stood tall.

Taylor Wilde in her Witch-ay persona cuts a promo hyping her match at Hard to Kill.

We get an excellent video package going through the last several months leading up to Mickie James’ Last Ride. We get highlights from all of her matches as we lead into her match with Jordynne Grace. Grace mentioned that she didn’t want to be the one to retire James but she wasn’t going to sacrifice her title and legacy for James’ career. James ended the video by saying that it’s do or die and she is leaving as champion.

The Last Rodeo comes to a conclusion TOMORROW in the main event of #HardToKill as @JordynneGrace defends the Knockouts World Championship against @MickieJames in a Title vs. Career match. #IMPACTonAXSTV pic.twitter.com/urC7Sxc0VR

The ring is set up with candles and a black mat. Very dark and spoooooky. Deaner said that he needed to shave his hair as it was the process of joining The Design. Deaner said that the loss of his hair represented the loss of ones identity.  As he continued to talk, the lights go out and Callihan just showed up in the ring. Deaner recalled the Story of Sampson and how his power was linked to his hair…

.@CodyDeaner demands @TheSamiCallihan come to the ring so his head can be shaved. #IMPACTonAXSTV pic.twitter.com/0hQb7yVTZ3

Deaner went on and said that the process is long and violent but wanted to see if Callihan would see it all the way through. Callihan said to stop talking and to cut his hair. Callihan sat on the chair and got his hair cut. Callihan was given a mirror and told to look at himself. Callihan broke the mirror on his own head and said that it was the death of the Death Machine and he is just Callihan now.

Gia Miller was with Gail Kim in the back. They have a conversation about looking for someone to fill in for for Scott D’Amore while he’s away after taking the powerbomb through the table. They announced they will announce that at Hard to Kill.

.@gailkimITSME doesn't intend to take @ScottDAmore's place in his absence after last week's brutal attack by @bullyray5150, but the person who will is going to be revealed at #HardToKill TOMORROW LIVE on PPV and @FiteTV. #IMPACTonAXSTV pic.twitter.com/XkLsohJJi3

Words can't even begin to describe how spectacular @SpeedballBailey is. #IMPACTonAXSTV pic.twitter.com/ztvkTP1g2u

This match was super fast paced. They went back and forth and eventually Greene hit a tope suicida on the outside to Bailey. He followed this up with a rope walk crossbody that led to a 2-count. Greene went for a powerbomb but Bailey escaped to the apron and as Greene went for a slide, Bailey hit a standing corkscrew shooting star press for a 2-count of his own.

Greene kept his momentum going as he hit a superkick on Bailey. Greene followed this up with a tornado killswitch but Bailey blocked it and hit a PK on Greene. Bailey then hit Greene with a spinning kick and hit the Ultima Weapon for the win.

We get a video package hyping the Impact World Title Match at Hard to Kill featuring Josh Alexander and Bully Ray. This was an excellent video recap.

The announcers run down the Hard to Kill and announced that Josh Alexander vs Bully Ray would open the show whereas Mickie James vs Jordynne Grace would be the main event.

.@TomHannifan and @DramaKingMatt break down all the incredible matches coming your way TOMORROW at #HardToKill LIVE on PPV and @FiteTV!

Before the match, Joe Hendry grabbed a mic and said that his team was against dancing Moose and the backup dancers. Edwards and Gresham started the match but Edwards immediately tagged out to Joe Hendry. Hendry hit a stalling vertical Suplex on Maclin and made the tag to Swann. Maclin hit Swann with a major Knee and stomach then made the tag to finally get Edwards into the action. Swann and Edwards went back and forth a lot but Swann got the upperhand and hit tons of high octane moves. Swann tagged out to Gresham. Edwards raked Gresham’s eyes and tagged Maclin back in the match.

All 6 men started brawling and we got the typical each participant hit a huge move. The final move of the set was Swann hitting a spinning heel kick to Edwards. The heel team took advantage of Swann and separated him from his team. Swann eventually hit an enziguri on Edwards then taggefd Gresham back into the match. Gresham put all the moves to Edwards and Maclin who tried to help Edwards but Moose came in and hit a Blue Thunder Bomb on Swann. Moose is officially back into the match and used his size against Gresham who couldn’t find a way to counter him. Gresham kept getting beat down but he found a way out and and got the hot tag on Hendry. Hendry cleared the ring and eventually hit a fallaway slam on Maclin for a 2-count.

Hendry kept the momentum up for his team but was slowed down when he was put in a Tree of Woe. Swann saved him. All 6 men are back in and hit the big moves. Moose tagged in blindly and speared Hendry hard for the win.

After the match, the lights went out and thunder rumbles. Edwards acted like he was the only one who saw this though as his team celebrated.

And that’s the show!

Be sure to check our preview of the PPV tomorrow morning!

The show started very slow but the Mike Bailey vs Anthony Greene changed the entire dynamics of the show. They showed some very great hype videos highlighting the two world championship matches. All in all, while not the best stand alone or go-home show, they did a great job of promoting the two big matches for tomorrow.

Be sure to check our preview and report tomorrow!