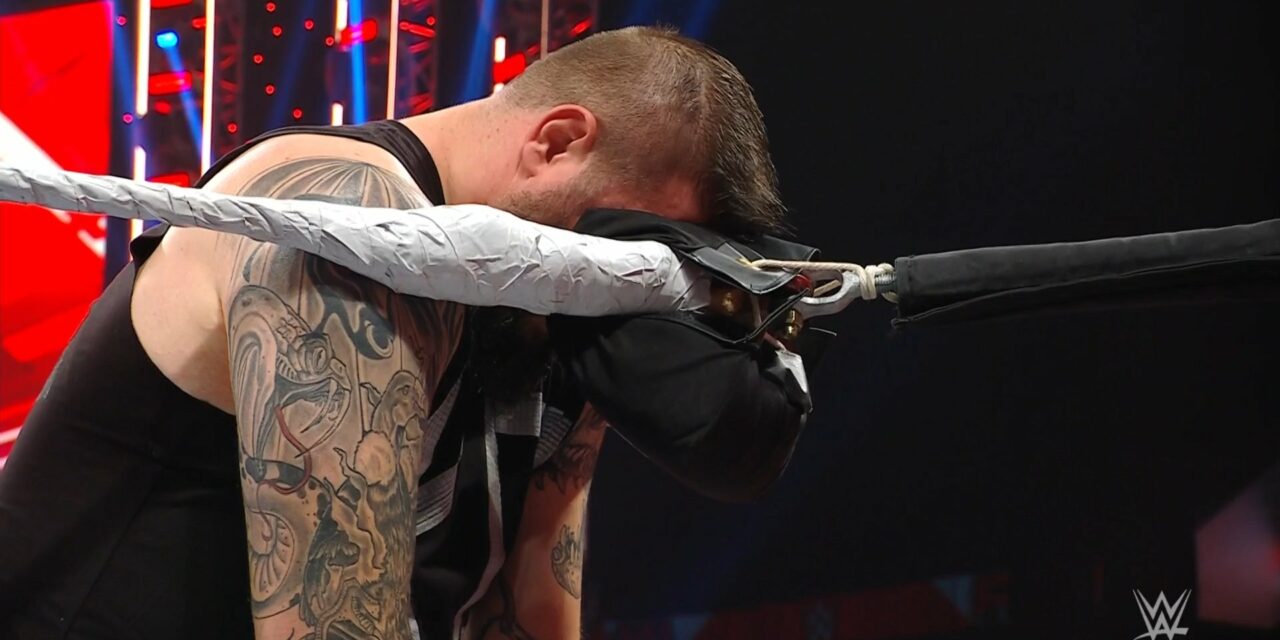 Apparently, there’s a big football game going on in the U.S. tonight. The result is either WWE throwing everything at this ep, or coasting. You be the judge.

If the start is any indication, we’re getting everything thrown at the wall, as Kevin Owens comes to the ring.

He gets less than a dozen words out before JBL breaks up the proceedings. Okay they’re coasting…

Look I respect JBL for what he did at his hottest, but he’s a one-trick pony.

The audio sync seems to be off as JBL is yammering, for what it’s worth.

Baron Corbin comes out, after missing however many weeks. Owens hides his face in a turnbuckle, feigning sleep, in a perfect sentiment for everyone watching. Corbin is fine enough, but this combination is just horrid.

JBL gets all whiny as KO challenges Corbin and we get the match we never knew we didn’t want.

I honestly can’t remember if we’ve seen this match before or not, but I’m not really into it. Corbin’s repeated resets have worn him into nothingness. Oh, and his logo looks like a Bitcoin reject.

Corbin and his behind-the-ear tats (yes, there are multiple now), start the control but KO takes over with shortarm clotheslines. Owens builds more intensity outside  until Corbin gets the Apron Chokeslam. Will KO survive? Find out after… say it with me now… the commercial break.

Back from break, KO is in control. The ADV doesn’t last as Corbin takes over. KO gets it back though and hits the Swanton pour deux. Corbin comes back and gets a two off the Deep Six. Stunner out of nowhere gets the win for the Canuck

Before KO can celebrate for long, Jey Uso pops out of the crowd. Jimmy and Solo Sikoa come out soon after and the mugging begins. The boys in black decimate the Number One Contender. KO gets a chair and decimates the Bloodline. Conspicuous by his absence is Sami Zayn. Just saying…

Back at the desk, we find out that Bianca Belair has multiple stitches from the bloodening by Alexa Bliss. Little Miss Bliss then appears atop the desk, and declares that she is the face of evil. We then get a playground setting flash on the screen along with Uncle Howdy, who apparently is the puppet master behind everything. We return live and Bliss apparently has been zombified while Howdy comes into the arena for the first time on Raw. Bliss almost shows disdain for the puppetmaster as we fade to black. Okay this is is a bit of a different wrinkle.

Oh, and for those curious, an NXT commercial still features Mandy Rose. We also get a rundown of the lineup for the A&E Biography: WWE Legends series.

And the name change is all but complete.

Yim is sans The OC.

Before the match starts, Bayley gets the mic and dedicates the match to Becky Lynch before sending Kai-n-Sky back to the locker area to chill. The fe-mullet is in full effect by the way.

Bayley ground and pounds to start, but Michin takes her turn and even pulls out TRANQUILO (or I guess this would be tranquila). Michin continues to dominate until she misses the Koppo Kick. Reversal sequence finishes continues for an extended period until Bayley gets the backslide with feet sur la ropes for the duke.

Backstage, Cathy Kelley talks with Candice LeRae who advises that Johnny Gargano is out with an injury. At one point, Nikki Cross lurks in the shadows. Rhea Ripley then appears and the two talk about the Royal Rumble. Apparently both are in the fray. A match between the two is setup for later in the show.

Back from the break, Austin Theory is in on his way to the ring. He starts his promo cutely with a John Cena line rip.

We learn from Theory that Seth Rollins is injured, and Rollins appears soon after on crutches, but quickly shows he isn’t truly on the shelf.

Theory goes off on Rollins, but Rollins looks like he could care less. Ultimately, both men are in the Royal Rumble.

As Rollins prepares to leave, Bobby Lashley comes out. He quickly disposes of Theory. Guess who else is in the Rumble…

Size up doesn’t look good for LeRae, who gets a strike fury quickly. She tries for a Tornado DDT but Ripley is just too strong.

LeRae is in deep trouble but sneaks out of a Superplex attempt and hits an elevated German. Rhea misses a big boot and is eliminat… no wait, it’s not Rumble time just yet…

LeRae tries a twisting body press but instead gets plucked out of the air and is decimated by Ripley on the outside. Riptide back in the ring gets the duke.

Bobby Lashley gives Byron Saxton a quick moment before MVP comes in. As it turns out, MVP is behind Lashley being reinstated. MVP is on a mission to get the Hurt Business back together. We’re close to getting the group back together.

We get a video on Cody Rhodes next on the surgery he had following Hell in a Cell. We then go to Cathy Kelley talking with Dolph Ziggler. Ziggler is then confronted by Mustafa Ali about not getting a chance in the Tag Team Turmoil match.

Byron Saxton attempts to interview Bronson Reed before Miz interrupts and speaks on behalf of both of them. Reed says he is only with Miz for the money.

This ought to be a squash.

Ziggler comes out firing, but Sikoa runs through the Showoff (literally). Graves calls Solo the super athlete, which if I remember correctly was Rusev’s nickname at one point.

Samoan Nerve Pinch is used as a resthold at one point.

Ziggler with the comeback but it’s hard to get into this match when the conclusion is so very foregone.

Sikoa tosses Ziggler over the toprope and Ziggler is elim… oh forget it.

Sikoa keeps the pressure on and we get a very light “Let’s go Solo!” chant. Ziggler is like Jimmy Snuka in his latter years at this point – an elevated jobber to the stars.  To my point, Ziggler hits the ZigZag to no avail.

A short time later, the Samoan Spike gets the duke.

Post match, The Usos appear out of the crowd again, just to piss off Adam Pearce.

Back from break, Kelley chats with Damage Control. Michin comes over to confront Bayley, which results in a gangstyle beatdown.

Back out to the ring we go for MizTV. Dom comes out looking completely lame in the faux thug look. Dom tries to look tough and it’s just laughable… actually no, it’s not laughable. It’s bad. Real bad. I don’t even want to recap this one. We’re getting the very early candidate for worst segment of the year.

Miz calls out the whole thing as being BS. Thank you Mike.

OC and Judgement Day start things off in what is essentially a Gauntlet Match.

Gallows is the face in peril, decimated by Priest and Balor until he gets the tag out to the former NEVER champ. Anderson tees off on Priest but soon falls victim as well.

Later, Gallows regains control for his team and looks like a Magic Killer is in the works, but outside interference result in Gallows and Anderson being excised.

Hurt Business are out next. Alexander hits Balor with a Suicide Dive out of the gate. Michinoku Driver gets two. More nearfalls for the reunited pair.

Very little offence from the Judgement Day here as Hurts really are hitting stride despite not being together for so long. They need to formalize the faction quickly. Neuralizer from Alexander gets two.

Priest hits South of Heaven out of nowhere, Balor hits Coup de Gras soon after while Priest holds off Benjamin for Judgement Day to advance.

Alpha Academy are out next.

Coming out of a break, Priest is in control over Gable, Balor continues this on the outside. Eventually, Otis gets tagged in and gets a face reaction. Otis takes apartJudgement Day. Otis soaks in the adulation and goes for the Caterpillar, surprisingly to the delight of Gable. Balor grabs hold of Gable who eats the Vader Bomb. Priest gets a Flying Heel Kick for the duke soon after at Otis’ expense, but Balor looks much worse for wear and even gets medical attention. If Adam Pearce wasn’t out, this would seem more legit.

Pearce allows Dom to take the spot, but Priest doesn’t want that at first. This is so freaking babyface confusing.

Tez starts out hot on Dom. Priest eventually gets tagged in and he and Tez have a very strong square off. Action spills y o the outside which is capped by a Tope Con Hilo from Dawkins.

Back from break, Dom is in control on Dawkins but Dawkins flips the switch. Dude is really looking impressive.

This whole prison narrative is so distracting and annoying.

Dawkins fights out of a face in peril situation, hitting an elbow out to stop the 619 attempt. Tez hits a Body Press to both JD member as should rightfully happen. Standing Moonsault gets two.

Priest gets tagged in and again gets a heat segment in on Dawkins. The Profits regain the advantage. Ford hits the 450 on Dom and seems to get the win until Priest pulls him off.

I can’t even keep up with the Profits until Dom gets the sneaky pin with Mami’s help. Good action save for Dom. The air of the stupid prison narrative hurts this match immeasurably.

Post match, The Usos come out to confront Judgement Day. I wonder who will be the faces in this match..