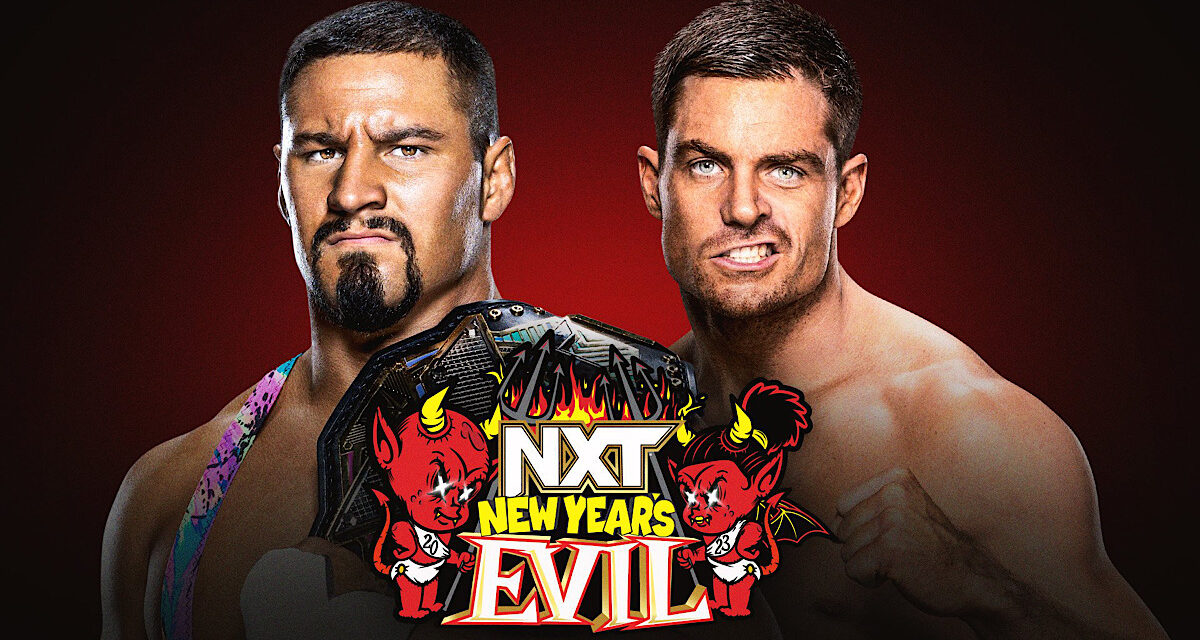 NXT’s first special event of 2023 featured a solid card on paper with potential for great wrestling, but with Vengeance Day around the corner, some surprises altered tonight’s episode in favor of building towards the February 4 event. Snapping middle ropes, double winners, and Jinder Mahal provided some shock value but ultimately left a feeling of deflation in a messy, convoluted, yet enjoyable regardless show.

D’Angelo and “Stacks” have been experimenting with a face run on the local Florida loop, but the piped-in crowd boos say otherwise. North American Champion Wes Lee joins commentary in a distractingly low-energy opening half until “Stacks” sacrifices himself ringside in favor of “The Don” preceding picture-in-picture, where the loyal henchman is handcuffed to the ropes by Dijak. The crowd gets behind D’Angelo, but as “Stacks” insists on finishing off the opposition, Dijak hits a finishing boot for three.

Toxic Attraction is interviewed backstage with their signature intolerableness, dismissing any chance of dissension in tonight’s battle royal.

Before the extensively built Creed Brothers versus Indus Sher bout, Sanga calmly enters alone with a microphone to announce that partner Veer Mahaan won’t be there. But with a huge pop arrives Jinder Mahal to blindside the Creed Brothers as astronomically rare “Jinder” chants commence. Sanga chokeslams Brutus into the steps, and “The Modern Day Maharaja” hits the Khallas on Julius before saying, “Veer and Sanga fight for respect. But I don’t!”

Pretty Deadly is approached by New Day to remind them that their match is next, and the former duo unrolls their hair rollers in panic – supposedly getting spiffy for potentially their final NXT match.

Valentina Feroz questions Sanga’s actions, and he responds saying, “Now it’s about me and my brothers.” Elektra Lopez chimes in to suggest “every woman for herself” in tonight’s battle royal.

“There’s no time to talk, because it’s time to fight!” state Pretty Deadly who continue speaking anyway to announce that they’ve picked “three of the toughest teams in NXT.” Out come The Rockers, Brian Williams and Jimmy Jackson, who are quickly put away with Spilled Milk. NXT Tag Team Champions New Day interrupt to foil plans and bring in Edris Enofe and Malik Blade for some real competition before picture-in-picture hits. Enofe receives a hot tag with intensity, and Blade hits a frog splash for a close two. Kit Wilson saves his team, pushing a cradle’s momentum in favor of Elton Prince for the victory.

New Day introduces the next team, Josh Briggs and Brooks Jensen, who are found laid out backstage in confusion. But in their place is the returning Gallus, Mark Coffey and Wolfgang, as their suspension from months ago is finally lifted. “Gallus boys on top” rings true when a finishing double-team maneuver earns them the victory. If it’s wraps for Pretty Deadly in NXT, they couldn’t have gone out in more fitting fashion.

Julius Creed is “sick and tired of getting jumped all the time,” but Ivy Nile argues about attending to brother Brutus Creed, who is injured in the trainer’s room.

Footage from earlier today shows Carmelo Hayes narrating a journal entry at a diner. “Ain’t nobody see past Trick-Melo gang!” interrupts Trick Williams, completing the most entertaining duo in NXT – even when sipping on coffee.

A package previews the big NXT Championship match between Bron Breakker and Grayson Waller, who has been pumping out quality social media content in preparation. This should have absolutely been the main event, and it’s something that the challenger wholeheartedly deserved.

NXT Women’s Tag Team Champions Katana Chance and Kayden Carter are congratulated on a record-breaking reign, which is only impressive when remembering the reign of terror Toxic Attraction had with them. Tiffany Stratton comes in the crosshairs, who refuses to answer questions for the camera.

The showdown between two of NXT 2.0’s greatest success stories is disappointingly slotted in the midcard but will presumably deliver nevertheless. Booker T hits his famous line regarding Breakker – “no bread, no water, just meat!” – as Orlando passionately chants for both competitors in the early goings. The champion later receives John Cena-esque “Bron Breakker sucks” chants as he dominates before picture-in-picture, which is controlled by Waller when snapping the middle rope over Breakker’s back. The latter makes a comeback, but Waller reverses with a nasty rolling knee strike before attempting his finishing middle-rope elbow drop – which breaks the ropes once again, sending the challenger to the floor. In a shockingly unique finish, Waller is counted out and protected in a sense, but a sadly deflating feeling here is just unavoidable.

NXT Women’s Champion Roxanne Perez is interviewed about her potential challengers and realizes that Toxic Attraction “are definitely threats.” On that note, Perez has to be the least threatening champion NXT has ever had.

A package highlights the relationship between Hank Walker and Drew Gulak, which culminates in a match between the former and Charlie Dempsey up next.

Axiom approaches Apollo Crews in the locker room, thanking him for saving the day against Trick and Melo gang last week. “Hey, you’re a numbers guy. There’s two of them and there’s two of us… let’s go make some calls,” suggests Crews.

“The ring has been double reinforced,” claims commentary after the events of Waller’s misfortune. “I think this ring is reinforced for a reason,” says Booker T, throwing strays as the heavy-set rookie Walker. Attention is clearly not on this match, and a graphic of a tweet from Shawn Michaels prefaces an announcement to be made regarding the NXT Championship match before show’s end. Anyway, Drew Gulak cheers on ringside, but it isn’t enough as Dempsey stretches his opponent for a tap-out victory.

Alba Fyre approaches Sol Ruca about “owing” her a singles match, and the former is offended by not having her offer immediately accepted.

The NXT Anonymous account stalks Scrypts fooling around Oro Mensah’s locker. Optimism for whatever this is isn’t high.

The return of Mahal means the return of one of Jim Johnston’s last masterpiece theme songs – one of the only highlights of a Mahal match. Creed jumpstarts the match and delivers a box jump superplex proceeding picture-in-picture, but it’s a slow state of affairs thereafter. Sanga climbs the apron, which allows Mahal to counter a Shooting Star attempt and hit the Khallas for three. The big pops for Mahal have already died within an hour.

Kiana James and Fallon Henley attend to Brooks Jensen and Josh Briggs, and the latter woman is “not liking what (she’s) seeing” between her friend and apparent enemy. After, a vignette for NXT UK’s Stevie Turner introduces an online streamer-gamer gimmick; “Stream offline. Check back again soon.”

The winner of tonight’s 20-women main event will face Roxanne Perez for the NXT Women’s Championship at Vengeance Day on February 4. Surprisingly, Cora Jade is immediately eliminated to the dismay of Orlando, but Sol Ruca makes a Kofi Kingston-esque save for herself. Everybody loves the elimination of Lash Legend, and meanwhile, Jade tries to re-enter herself but fails against Lyra Valkyria once again. After picture-in-picture, Indi Hartwell is taken out by Toxic Attraction leaving nine competitors in the latter half. Wendy Choo is saved by her body pillow until Elektra Lopez pulls it from under her, and fan favorite Nikkita Lyons is eliminated by rival Zoey Stark.

Ruca gains the unanimous support of Orlando before getting dropped by Alba Fyre, and the final four competitors regroup. Valkyria extinguishes Fyre, but the former is once again foiled by the returning Jade leaving Jacy Jayne and Gigi Dolin to themselves. The entire crowd stands for the dissension of Toxic Attraction, but both women are sent to the floor simultaneously for yet another screwy finish.

Nobody is tearing their quads tonight, because both Jayne and Dolin are declared victorious – in hindsight, the right decision for the upcoming special event. Perez makes an entrance and eyes her two challengers for February 4.

Shawn Michaels sits down with Grayson Waller and NXT Champion Bron Breakker, revealing that a rematch will go down at Vengeance Day inside a steel cage – the mainstage this match definitely deserves. The big question now, however, is what happens with Carmelo Hayes? Trick-Melo gang continue their trek towards February 4, which hopefully leads to the ultimate NXT showdown at a later date.

It thankfully isn’t over between Breakker and Waller, and the latter deserves that arena spotlight more than anyone else. It was one of many twists tonight that hindered a really solid card that would’ve been stronger had it relied on simply great wrestling, which it certainly had the potential to. It was nevertheless entertaining, just with a lot to process.