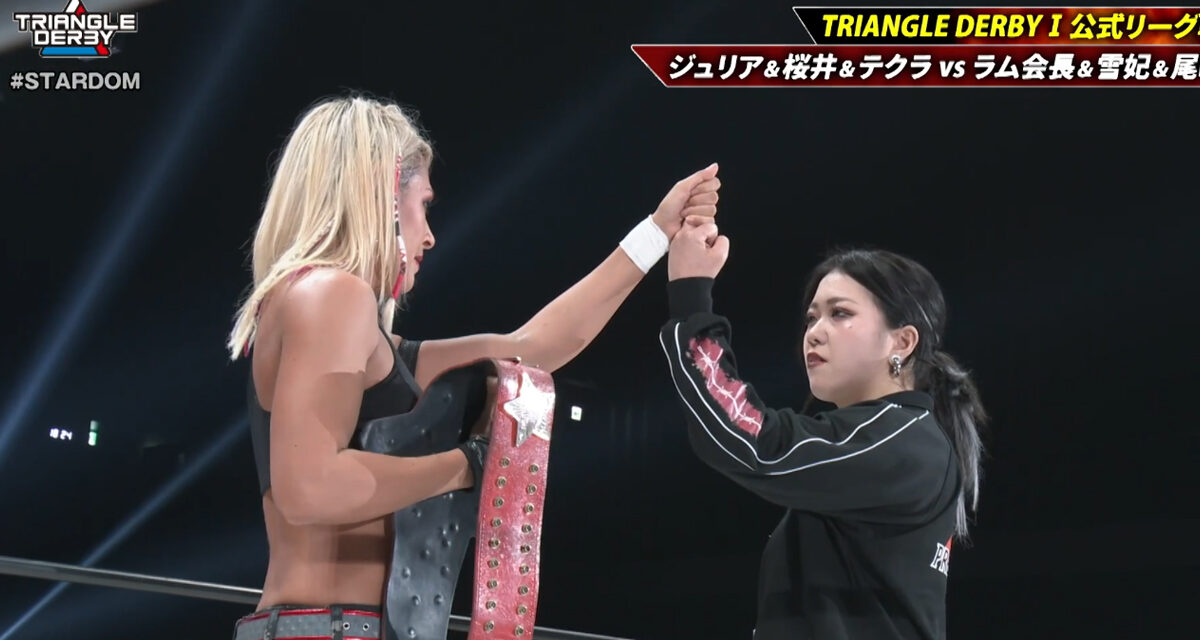 Stardom’s on-going Triangle Derby tournament took a backseat to drama surrounding Giulia’s reign as World of Stardom Champion, which has just begun. The tournament itself is is the first annual round-robin tournament with teams of three wrestlers battling each other.

The trouble began for the champ in the main event event match in which Donna Del Mondo (Thekla, Mai Sakurai and Giulia) took on the Rebel X Enemy (Ram Kaicho, Maya Yukihi, Maika Ozaki) in a tournament match that didn’t go well for Giulia.

Ram immediately steps up to Giulia. Raw just stares at Giulia who shakes her head in confusion. The two mat wrestle until Giulia just throws her off. Rebel Army dumps the rest of Mondo to the floor so they can work over Giulia. They take turns just battering her from corner to corner. Giulia catches Ram on the top rope. First she spanks her for being so foolish and then attempts a superplex. Raw drops down basically DDTing Giulia on the top turnbuckle. Ram celebrates her small victory as she poses for the crowd.

When Ram reenters the ring Giulia slaps her in the face, slams her and stomps on her. She tags in Mai who cuts Ram off from her corner before she can tag out. Mai hits Ram with a running kick in a corner and a running bulldog for two. Thekla, one of the very best performers and women’s wrestlers in the world today, takes over. She slams Ram over and over again. Thekla hoists Ram up again. Ram slips behind Thekla locking on a sleeper hold. Thekla knocks her off by backing her into a corner. Ram finally tags out after delivering a bulldog to Thekla.

Maika Ozaki tags in mowing everyone down, even Giulia and Thekla at the same time. Thekla works her way out of Torture Rack only to be hung up in the ropes by a clothesline. Mondo clears the ring as Thekla slaps on her Tarantula submission hold in the middle of the ring on Maika. 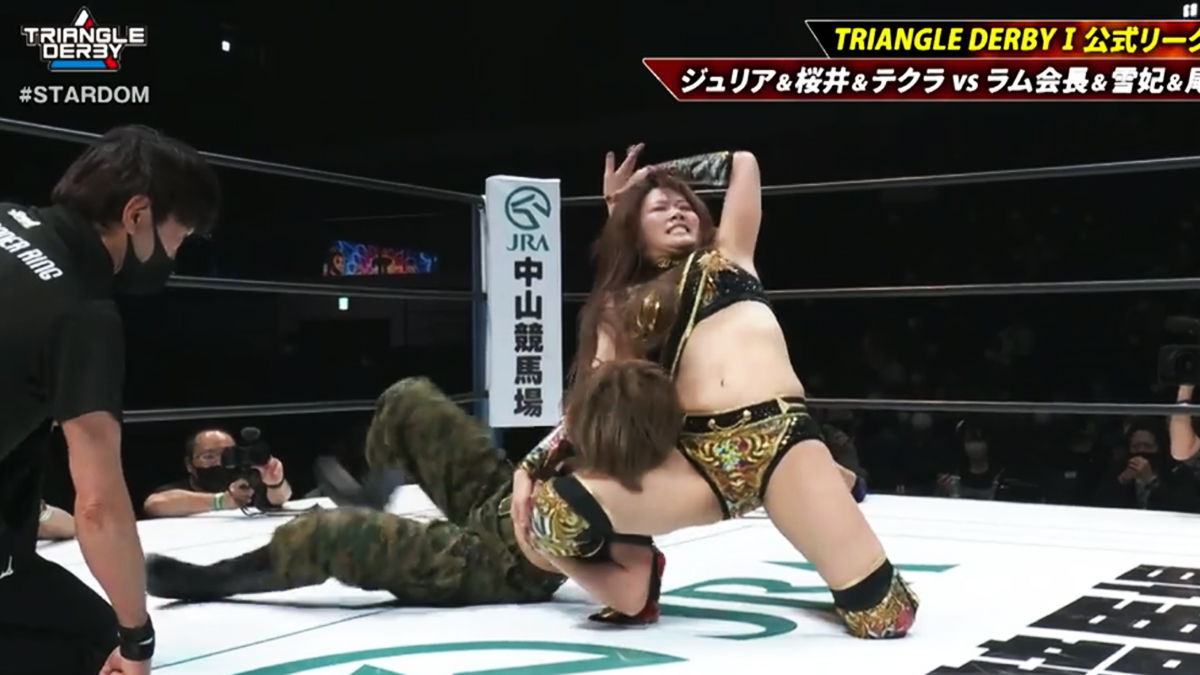 The champ takes over but is caught in Maika’s Torture Rack. Giulia refuses to quit so Maika turns it into a backbreaker. Yukihi just unloads on Mai just blistering her with a running knee in the ropes. A crazy arm-bar submission forces Mai to tap out.

Ram took to the microphone to rub the win in.

“It was Rebel X Enemy who won the main event! You guys better not f–k with Rebel X Enemy!” she warned. In her first match in Stardom, Maya Yukihi was surprised her team won.

“We want to destroy this Triangle Derby!” she said as Donna Del Mondo looked on.

“How could you lose the first time after getting that belt? If that’s the kind of champion you are Suzu Suzuki will take that red belt away from you!” said Suzuki challenging her to a title match. 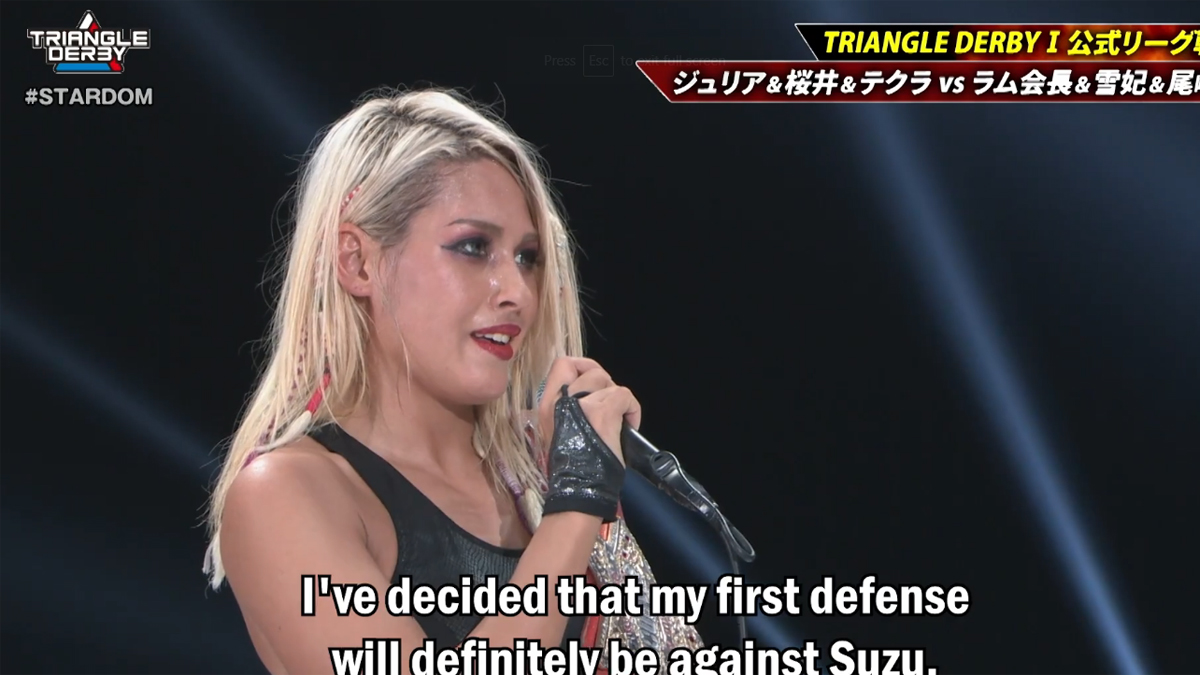 Giulia won’t back down. Courtesy: Stardom.

“The place will be a big show. February 4th in Osaka. By the way, I have a huge surprise for you. Everyone can look forward to it. Let’s pick up where we left off on that day,” said Giulia confirming the main event of the Supreme Fight pay-per-view.

Suzuki warned Giulia that she will crush her at Supreme Fight.

You can subscribe to and watch Stardom on its streaming service here: https://www.stardom-world.com/. 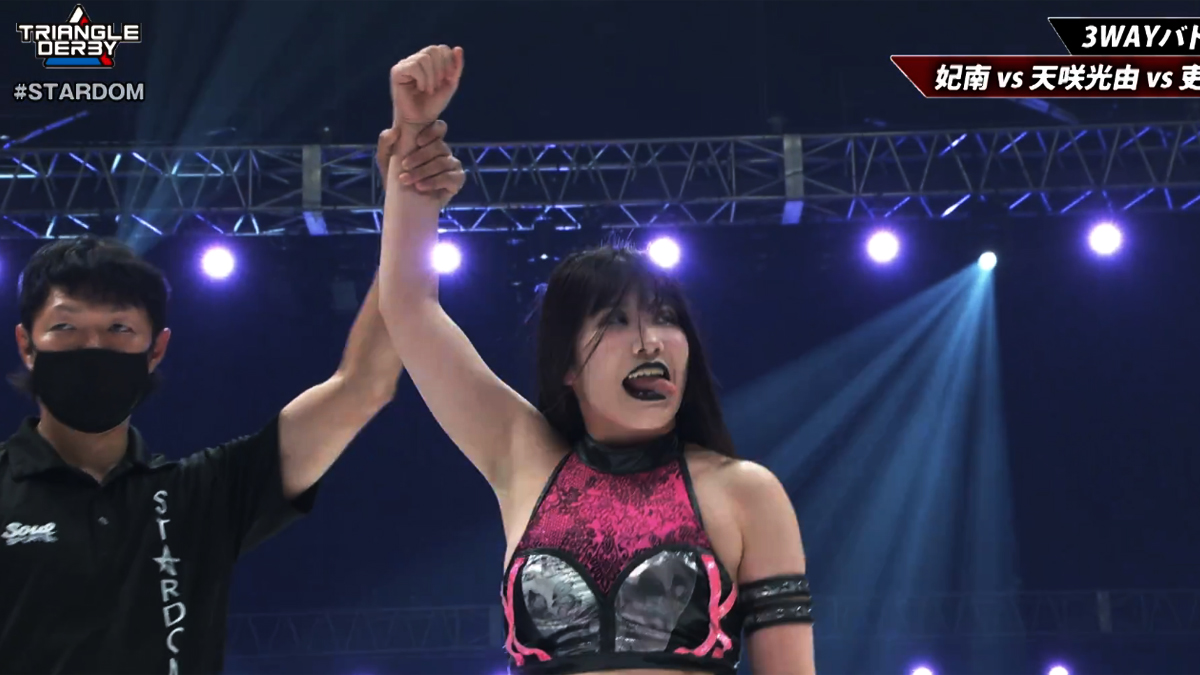 Twin sisters Rina and Hina come to blows in this one. Naturally, Hina and Miyu immediately team up against Rina. The match set-up seems to have it in for poor Rina. It doesn’t take long for the Queen’s Quest faction members to turn on each other though. Not a clean match in any way. There are several botches here and there as the sisters tangle for most of the match. Rina pins her own sister with a bridging pin after whipping Hina into Miju and knocking her off the apron. 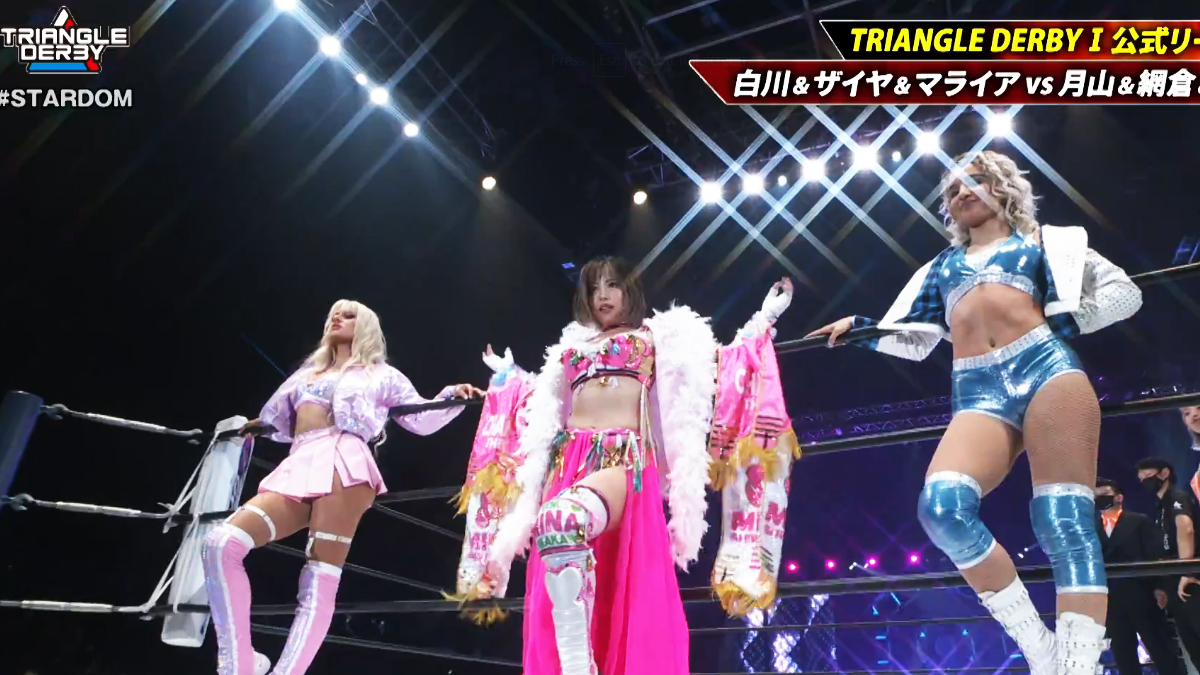 It is great to see Brookside land on her feet after NXT UK was shuttered. That brings up an important point. Where is NXT Europe? Everyone shakes hands before the match begins. It is clear right away that May will be using her height and strength advantage in Stardom. She muscles around poor Waka early on. Waka definitely has one of the best attitudes of any Stardom superstar. The commentators mention Brookside’s time in NXT UK. Venus won’t let Waka tag out. Waka nails Mina with a succession of forearm shots. Mina drops her with one haymaker. Brookside gets hung up in the Tree of Woe. Lolipop just batters Brookside one after another. Brookside pins Waka with a straight-jacket slam off the top rope.

The lightening-quick Kid and Suzuki battle to an impressive draw and have to tag out. Prominence keeps the others out of the ring while Sera bends Haruka into a pretzel. To counter Hiragi’s strength Glare has to double and triple team her. When Ruaka and Hiragi enter the ring the two juggernauts won’t give an inch. A shoulder tackle from Hiragi brings Ruaka to the mat. After she is clocked by Hiragi’s super kick, Suzuki pins Ruaka with a roll-up. 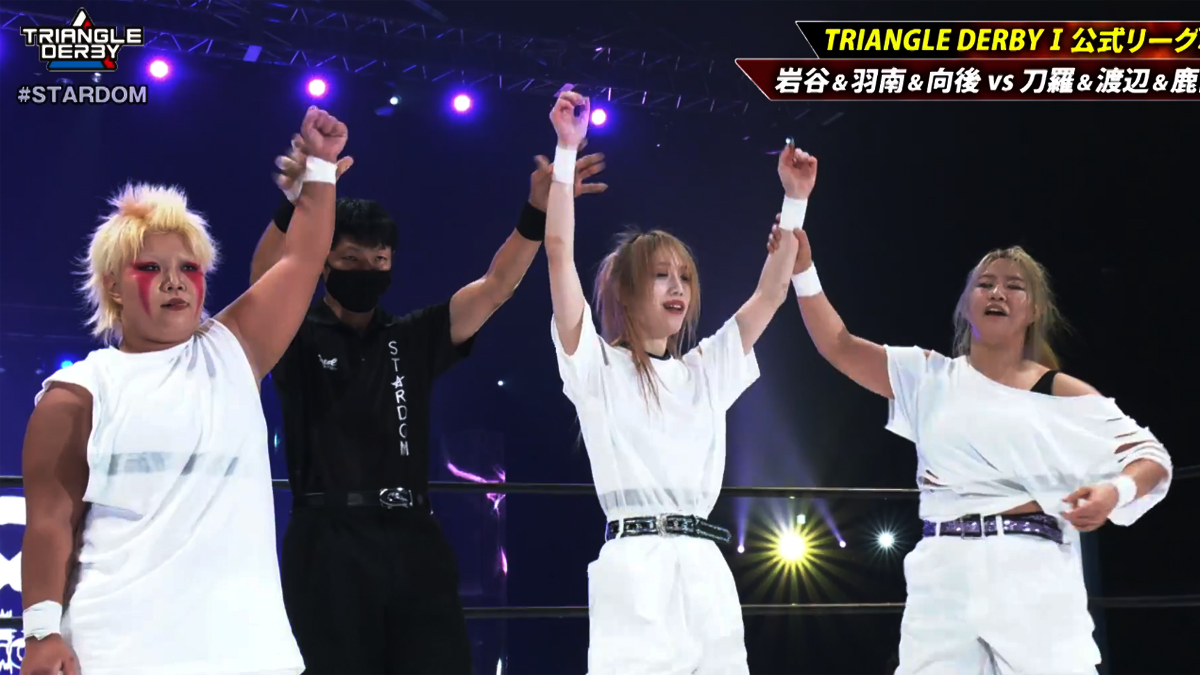 Oedi Tai comes out all dressed in white, which is humorous. Tora is carrying her pipe and Momo her baseball bat. Stars tries to jumpstart the match but Oedi Tai fends them off. Tora hurls Kohgo around the ring like a rag doll. Kohgo fires off some rapid fire chops at Momo. Momo just smiles and sends her to the mat with one kick. Tora just crumples Kohgo with a Samoan Drop and a drop kick off the ropes. Kohgo lands a drop kick which finally allows her to tag in Hanan and escape the beating she is receiving. Oedo Tai ends up exploiting weak link Kohgo. Momo spikes her with a driver then Tora hits a swanton off the second rope and finally Saki hits her double knees off the top rope for the win.

Tam outwrestles Lady C at the start. Soon, all three Cosmic Angels are triple-teaming C. Saki tags in continuing the beatdown of C. Lady C fights back sending Saki for her spin. Surprisingly, the smaller Natsupoi holds her own against the “Jumbo Princess” Himeka. Natsupoi even drop kicks her right out of the ring and then splashes her from the top rope on the floor. In a cool move, Maika holds up Natsupoi in a suplex on the second rope and Himeka comes in bringing them both crashing down with a powerbomb. I am not sure who got the worst of that move. Maika reverses a roll-up by Natsupoi pinning her.

The agile and quick Koguma almost scores a pin immediately stunning 7Upp. Eventually though, Stars cannot overcome the strength and power of 7Upp as Takahashi just drives Iida into the mat. 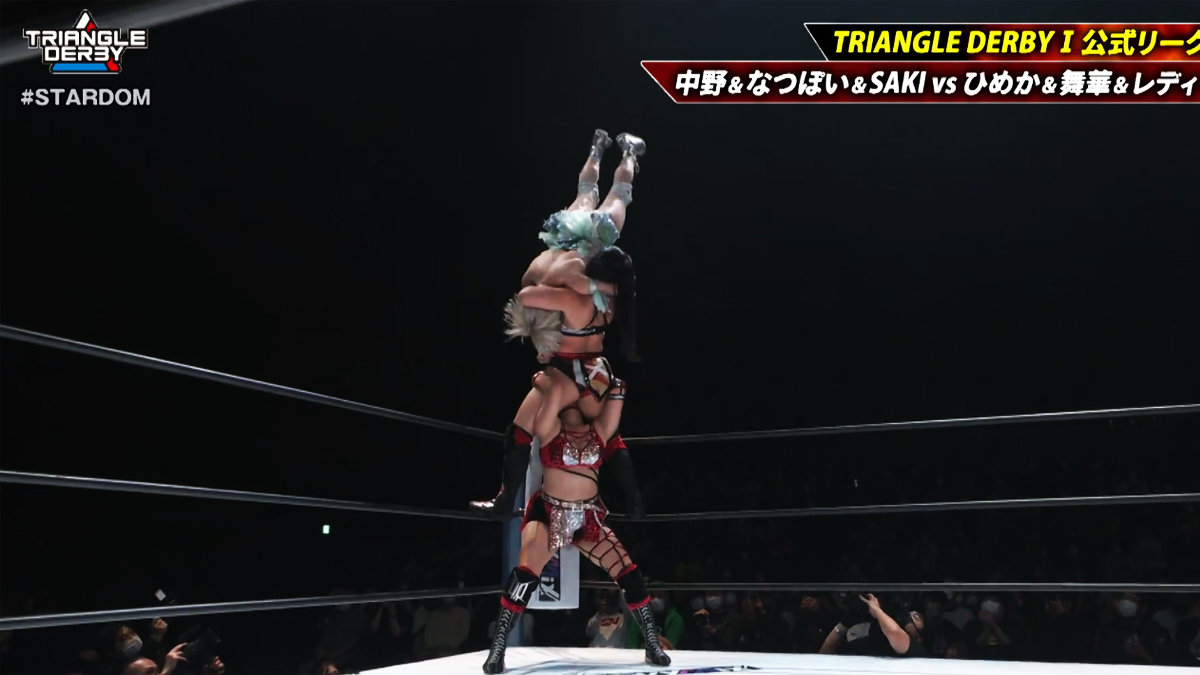 What goes up must come down. Courtesy: Stardom.

A shoulder breaker from Sourei rocks Saya. Saya counters with her speed which brings in the rest of Queen’s Quest. They triple team her slamming her to the mat and drop kicking her in the face. Saya’s double knee drop gets her a two count. AZM leaps out of a corner but Sourei catches her and dumps her hard on the mat. Mirai is tagged in and she is happy to continue punishing AZM. Syuri, the former Stardom Champion, takes over shotgun drop kicking AZM into a corner. A running knee in the stomach and a double underhook suplex is good for a two count. The fight goes to the floor where springboards onto God’s Eye but they catch her and throw her onto her Queen’s Quest pals. It looks like Saya has Sourei pinned by time runs out.