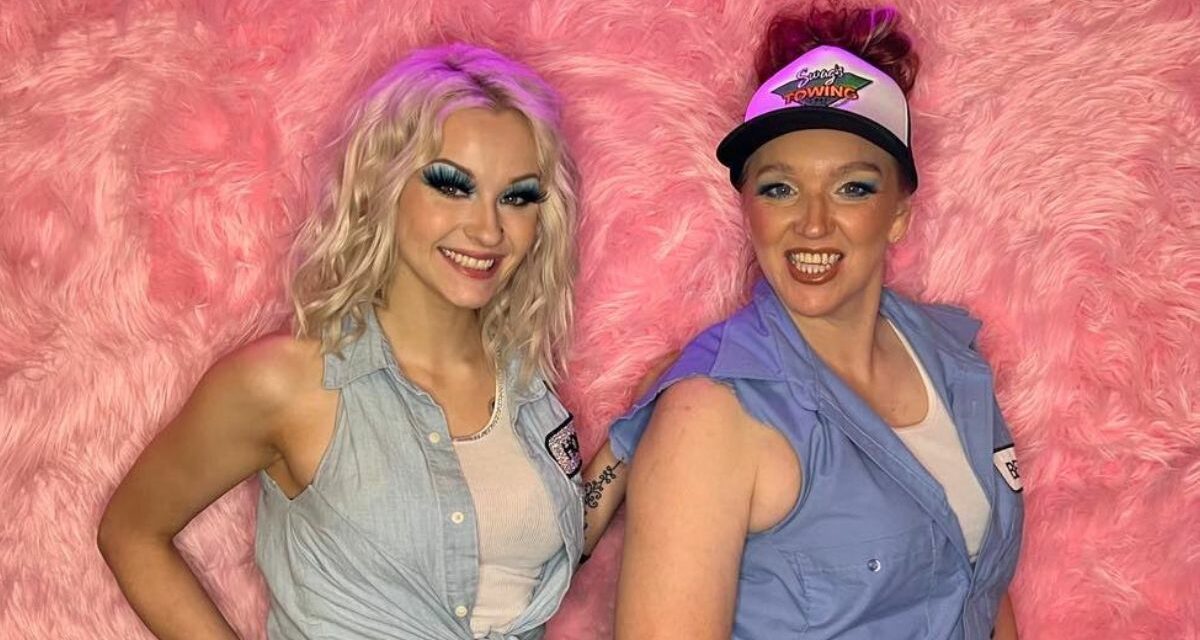 Pro wrestling fans from the Midwest may do a double take when they see the latest smash mouth tag team from Women of Wrestling make their debut. The mother-daughter team of Big Rig Betty and Holly Swag, aka The Mother Truckers, bear a striking resemblance to another mother-daughter duo fans in the region called Kentuckiana know very well…

One look at Big Rig Betty brings to mind the name Amazing Maria, a former Ohio Valley Wrestling Women’s champion. Now head of the women’s division at OVW, Maria won the 2018 edition of Prince of the Deathmatch at IWA Mid-South. She was also one quarter of the greatest match I ever saw live: a no holds barred, falls count anywhere dust up in Fort Wayne, Indiana, pitting Maria and Samantha Heights against Mickie Knuckles and Dementia D’Rose. The ladies grabbed an apathetic crowd by the throat and made them pay attention. They also sent one fan and his girlfriend begging for a refund because the match made them feel “unsafe.”

Daughter Holly Swag closely resembles another former IWA Mid-South headliner, Hollywood Haley J, who now features almost weekly at OVW. Haley, pretty in pink and fishnets, hits hard on the mic as well as the ring, and became an instant rival of her own mother, Amazing Maria, when she debuted for IWA Mid-South in 2020. She’s now a fan favorite at OVW, and on January 5, 2023, she won the Women’s Nightmare Rumble after entering at number one.

The genesis of Big Rig Betty comes from Maria’s real life. She held a number of jobs in her former life before pro wrestling, one behind the wheel of a semi-truck. Maria grew up a fan of pro wrestling, watching alongside her grandma as a kid.

“Grandma liked the good guys, and I always liked the bad guys,” she admits, “So that was a while lot of fun.”

Maria was already a mom by the time she gave wrestling a try, and all credit goes to Haley for giving her the nudge. “I always wanted to do it, but I had young kids,” she says. “When Haley was about eight or nine, she said, ‘Mom you might as well just do it. You know you want to!’”

It was a serendipitous moment between mother and daughter, one that shaped their family for the better. Maria had once confided in me that if it weren’t for pro wrestling, she’d probably be in jail somewhere for getting into a bar fight.

Haley laughed when I brought up that comment and added, “I believe that statement.” 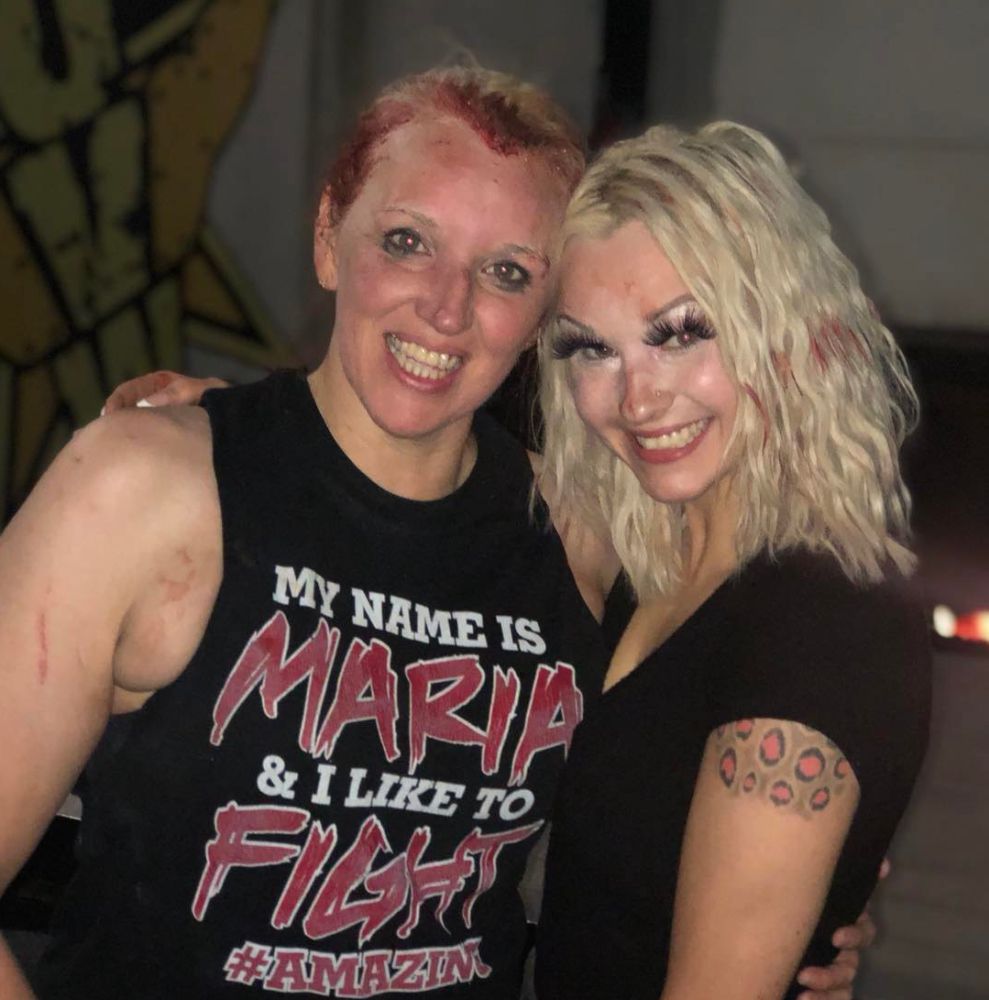 A bloody Amazing Maria with her daughter Haley J at OVW. Photo by Lloyd Thomas Photography

Maria had a rough first two years of training, but she finally connected with Legendary Larry D, a former Impact star and a celebrated independent from Kentucky. She also hit the road with the late Tracy Smothers, whom she still refers to as Pops. “I learned so much from Larry and Pops,” says Maria. “And I learned a hell of a lot from Ian Rotten. If it wasn’t for those three people, I probably wouldn’t be in wrestling.”

As mother started to make a name for herself in the independent wrestling scene, daughter was looking for a career of her own. “I was broke. I hit rock bottom, I was tired of being a hood rat in real life. So I flew to Indiana and started training with Rev,” explains Haley.

Rev is Ronnie Roberts, formerly known as Reverend Ronnie Roberts and now part of a demonic faction at Ohio Valley Wrestling called The Fallen. Behind the scenes, he’s become one of the most beloved teachers and mentors in the Midwest.

The COVID-19 pandemic played a hand in helping both ladies get to Ohio Valley Wrestling. The promotion was under new ownership and new direction thanks to Al Snow, but strict health restrictions in the state of Kentucky kept the doors of Davis Arena on Old Shepherdsville Road closed. OVW returned to its roots for a brief time, crossing the bridge into Southern Indiana, where the promotion briefly ran shows at The Arena on Spring Street in Jeffersonville, where Maria and Haley were also wrestling for IWA Mid-South. Snow brought them both into OVW: Haley as a wrestler and Maria as head of the women’s division.

Maria had just had knee replacement surgery and actually retired from in-ring action at that time, but behind the scenes, she used her time wisely. Numerous connections in the indy world allowed her to build what’s become a talented women’s division at the Louisville-based promotion that now includes Leila Grey, Shaloncé Royal, Freya the Slaya, Shawna Reed, and Arie Alexander.

“Maria and Haley have made a very positive impact on OVW’s women’s division both in the locker room, and in the ring in front of the fans,” says Al Snow. “I’ve been able to use their talents to tell very entertaining stories that have captivated the fans.”

The itch to wrestle never left Maria, though, so when her doctor told her she could resume wrestling, she did. “I’d always been told once you had a knee replacement, you’re done,” says Maria. “But these knee replacements last 15, 20years. My doctor said as long as I rehabbed and worked out properly, I could do everything I’d been doing before.”

In the summer of 2022, while a camera crew from the BBC was in town filming an upcoming documentary for Netflix, Maria returned to the ring to face her own daughter in a No Disqualification Match. Once again, Haley got her Momma back into the ring, and the timing could not have been more perfect. 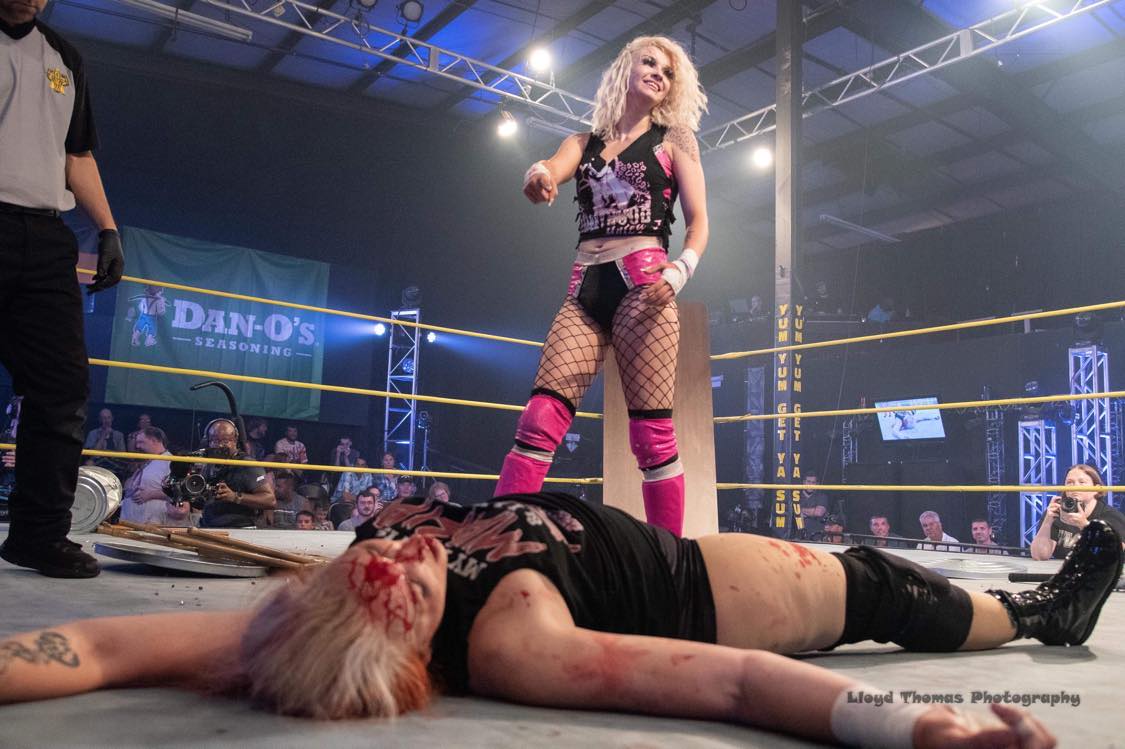 Out on the West Coast, David McLane was starting to ramp up Women of Wrestling for a new run. McLane already had the redheaded firebrand Jessie Jones, who fans may note closely resembles another indie darling, Jessie Belle Smothers. Jessie Belle and Maria were practically sisters, thanks to Tracy Smothers, and had once billed themselves as the STDs: Smothers’ Twisted Daughters. It was Jessie who introduced Maria to McLane, back when WOW was first getting started.

“The first time I spoke with them, I tore my ACL,” says Maria. “The second time, COVID happened, and everything got shut down. We thought it was over and done with.”

“Then Jessie Belle called and asked us to come out and tape an audition,” says Haley.

“I thought they were just terrific,” says David McLane, the creator of WOW. “We created their personas, Big Rig Betty and Holly Swag, based on real life. We knew Maria could drive an 18-wheeler, and we wanted to play up their being the first real life mother-daughter team in WOW history. The fans took to them like a duck takes to water.”

The Mother Truckers, proprietors of Swag’s Towing, became an instant hit with the fans when they made their debut. “She’s the tow truck driver, and I drive a big rig,” says Maria. “When her little wagon can’t handle it, she calls in the big rig.”

“Yup, I take the heat, and when I get in trouble, I call in Momma,” says Haley.

“She’s Ricky, I’m Robert,” jokes Maria, making the connection between their own dynamic and that of the legendary Rock ’n’ Roll Express of Ricky Morton and Robert Gibson.

Maria and Haley received a warm welcome in the WOW locker room. “It’s like a sisterhood,” says Maria. “And David’s a funny guy. He’s very meticulous. He likes things a particular way, but he’s a very fun guy.”

“They give us creative freedom,” says Haley. “I don’t ever have a script for my promos.”

While the ladies are only working as a tag team at WOW, they’re enjoying every moment of it. “We probably argue more than when I’m working with other wrestlers,” admits Haley. “When I see something a certain way and she sees it different, she’s not gonna give up as easily as someone else would. She’ll argue with me. But that’s because we can be more honest with each other.” 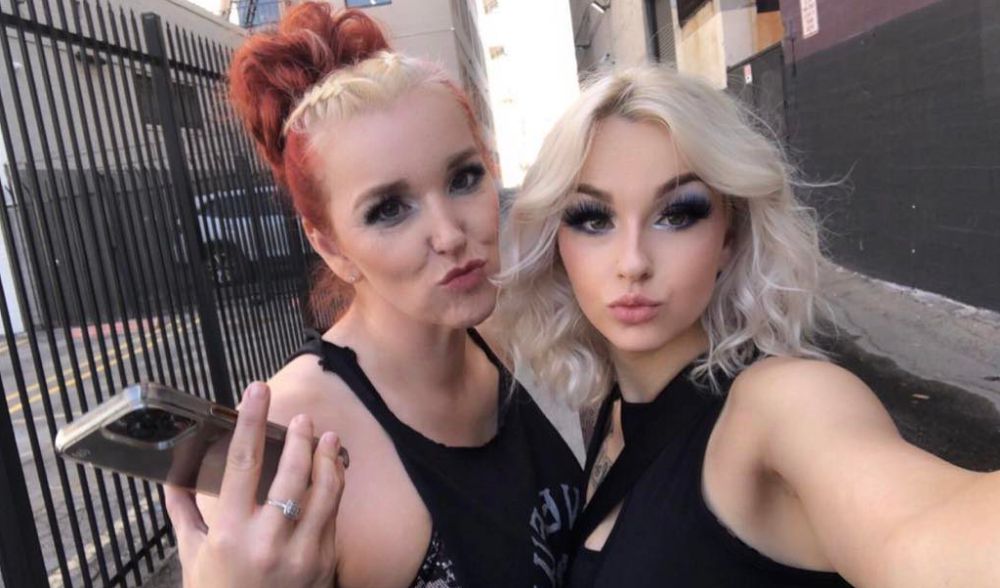 Haley is still relatively new to the business and learning every day, especially from her mom, but Maria admits she’s learned one thing from Haley. “She has taught me patience! Seriously, though, I have to remind myself all the time she’s still young. There’s a lot to learn, but I’m learning to be patient and trust she’ll get there.”

“It’s not about the years in the business,” Haley replies, “It’s about the experiences you get.”

“That’s true,” says Maria. “She’s had more experiences in three years than a lot of people get in ten.”

Haley has earned those opportunities, too. She has a comfort level with her in-ring persona that most young wrestlers can’t touch. Running her mouth constantly, she has a non-stop dialogue partly with herself, and partly with the audience. It is pure entertainment, and every movement she makes is in-character. She connects with the crowd as soon as she enters the Arena, and demands that attention until she vanishes through the curtain.

The wrestler known to WOW fans as Jessie Jones is certainly glad to have Big Rig Betty and Holly Swag in the locker room. “Being from the South and the independent wrestling circuit, The Mother Truckers are old school forces to be reckoned with. I’ve known Betty since 2010 and Holly since she started training. They’ve learned from the best,” said Jones. “I feel safe knowing they’re in the locker room and they have my back. If Disciplinarian keeps up her stuff, I might have to get some reinforcements.”

For The Mother Truckers, the best part of the WOW experience is working side by side as a team. Neither woman would be in professional wrestling if not for the other, and they don’t take a single moment of it for granted. “Not many people get to work with their kid in a tag team,” says Maria. “It’s a very heartfelt thing for me.”

“She’s getting soft on me,” groans Haley, feeling the moment turn sentimental. 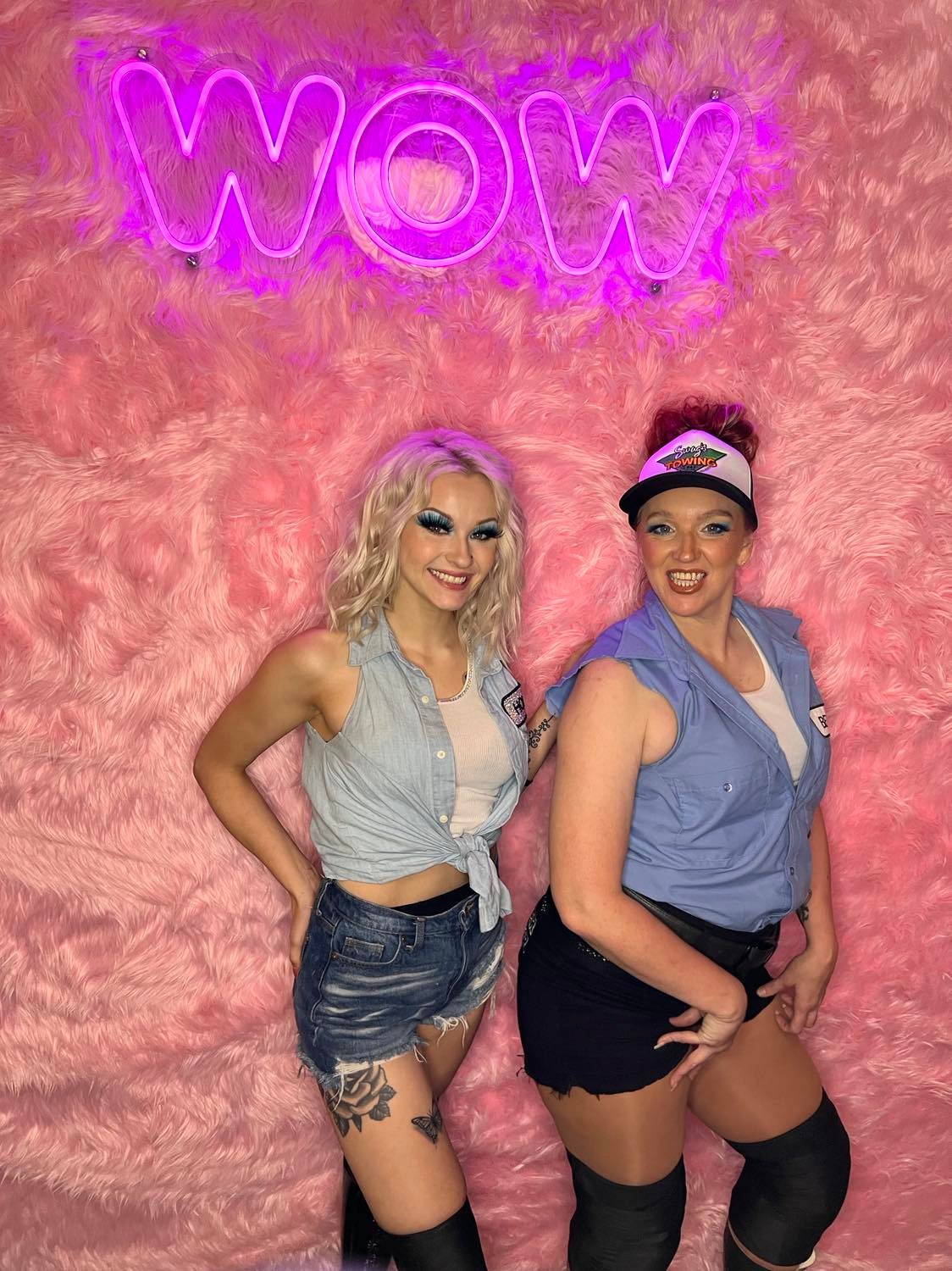 Maria and Haley’s boss in Louisville believes great things are ahead for The Mother Truckers. “Fans can expect to see a mother daughter duo that brings personality, charisma, aggressive excitement and fun to the ring,” says Snow.

“They’re great people, and their timing was perfect,” adds McLane. “They were filming the Netflix [show] at OVW the same time they arrived at WOW. I’m sure it was a fun year for them. They’re going to take off big time because they’re both great talents.”

Time will tell if The Mother Truckers join forces with Jessie Jones to wreak havoc in the WOW ring, and fans can catch the excitement as it unfolds each week. Check your local listings and tune in to Women of Wrestling.

And don’t forget to catch OVW weekly on Fite TV. You’ll see Holly Swag’s other persona, Hollyhood Haley J, in action alongside the amazing talent her mother has assembled. You just might catch an appearance by Amazing Maria as well. 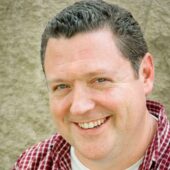