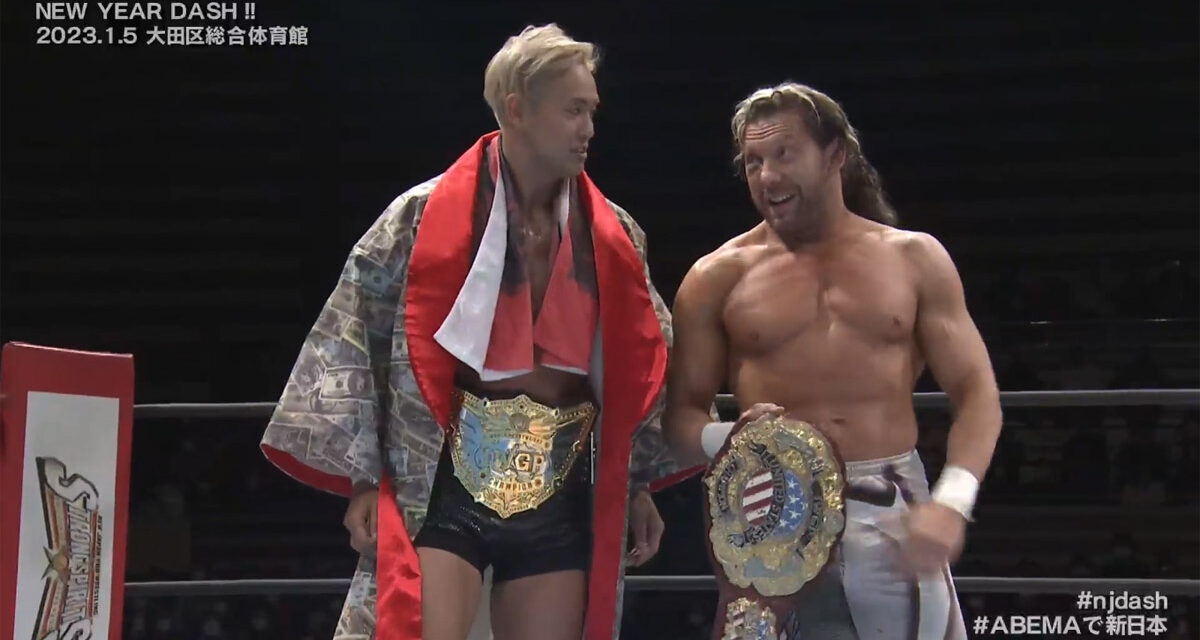 This year’s New Year Dash event had surprises aplenty as NJPW began 2023 with a bang. As per usual, the full card was not revealed beforehand. Instead fans found out what was being presented as each match began. The main event had Kazuchika Okada (IWGP World Heavyweight Champion) teaming with Kenny Omega (IWGP United States Heavyweight Champion) against The United Empire’s Jeff Cobb and Aaron Henare. Omega and Okada have never teamed together before tonight.

Cobb tossed Omega head over heels. Omega landed in a corner and tagged out to Okada immediately. Okada worked over Henare quite easily. Body shots from Henare slowed Okada down though. Cobb punished Okada until Omega came in to rally Okada. Cobb just heaved Omega back into his corner. 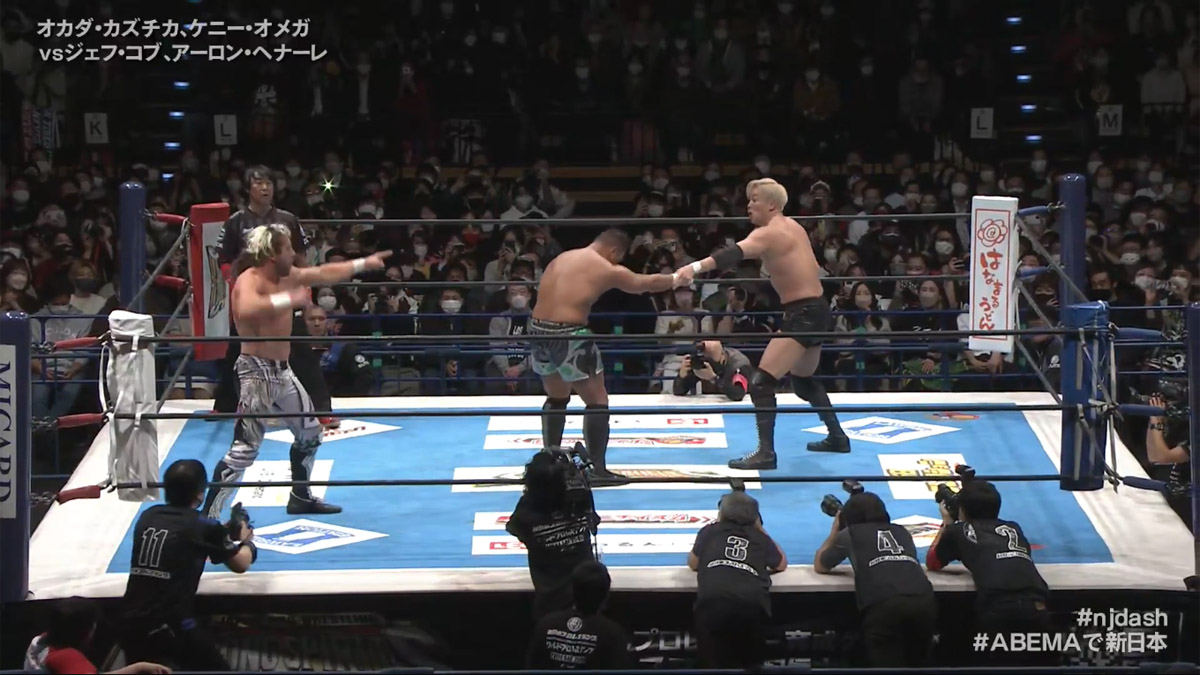 The champs are ready to put Henare away. Courtesy: NJPW.

Cobb took Omega outside the ring after he saved Okada from being pinned. Okada blocked The Streets of Rage and stunned Henare with a flying drop kick. Okada landed a flying elbow smash from the top rope on Henare but missed his Rainmaker Clothesline. Omega blasted Henare with a v-trigger. Omega slid out of a Tour of the Islands. He pushed Cobb into Okada who drop kicked him. Omega snap dragon suplexed Cobb. 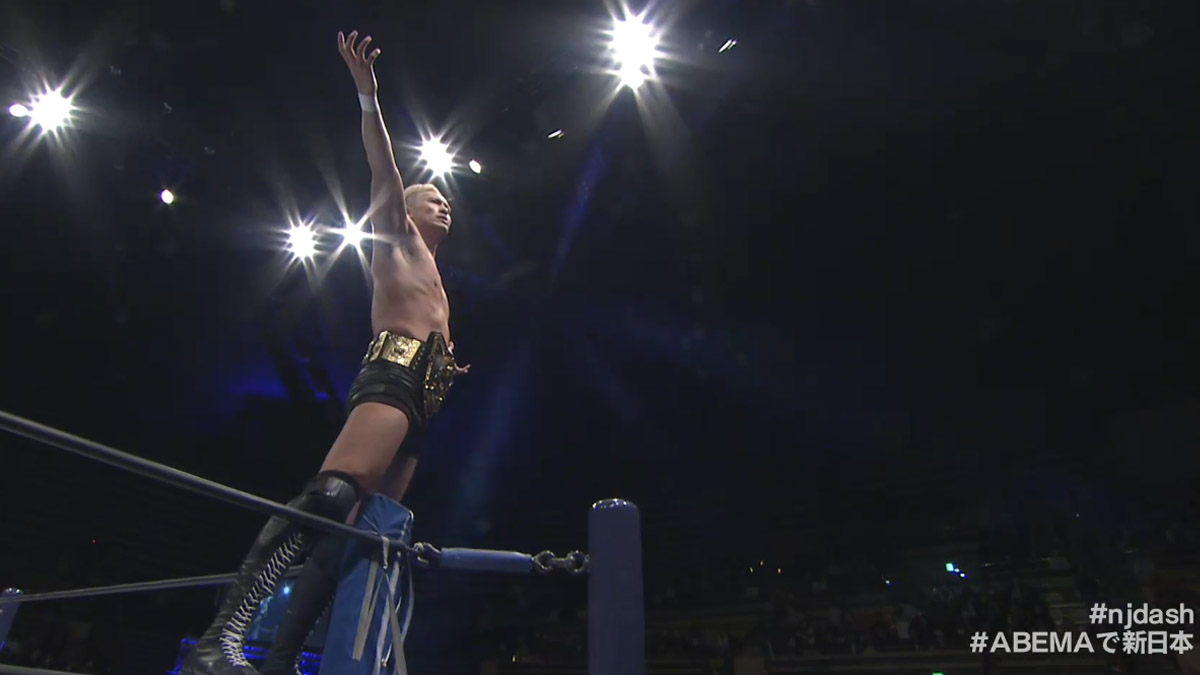 Okada holds Henare up so that he can hit him with a short clothesline as Omega hits him with a v-trigger. Okada pins Henare with a Rainmaker clothesline. After the match, Cobb made Omega aware that he wants to challenge for the IWGP United States Heavyweight Championship while Shingo Takagi came out and challenged Okada to a IWGP World Heavyweight Championship match. Okada agreed…any time, anywhere. 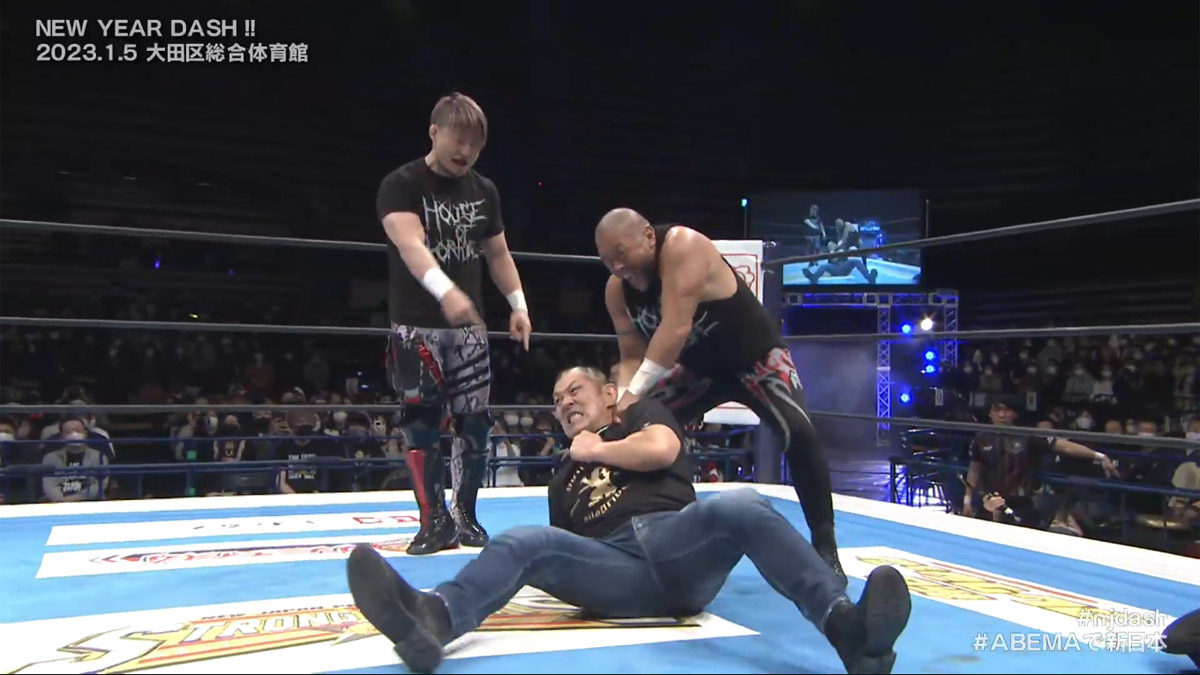 Dick Togo goes after Tiger Mask’s mask to the point of almost entirely unlacing it. Togo pulls out his garotte to get the official’s attention so that Yujiro can clock the faces with his cane. Evil and Yujiro hit Honma with the Magic Killer. As the House of Torture puts the boots to Narita, Minoru Suzuki arrives to fight them all off. Sho joins the fray. Togo chokes Suzuki with his garotte. House of Torture stomps Suzuki until El Desperado rushes into the ring. Narita and Suzuki bounce back to help send the heels fleeing. The two teams trade some heated words. Suzuki and Desperado leave the ring without addressing Narita in any way. 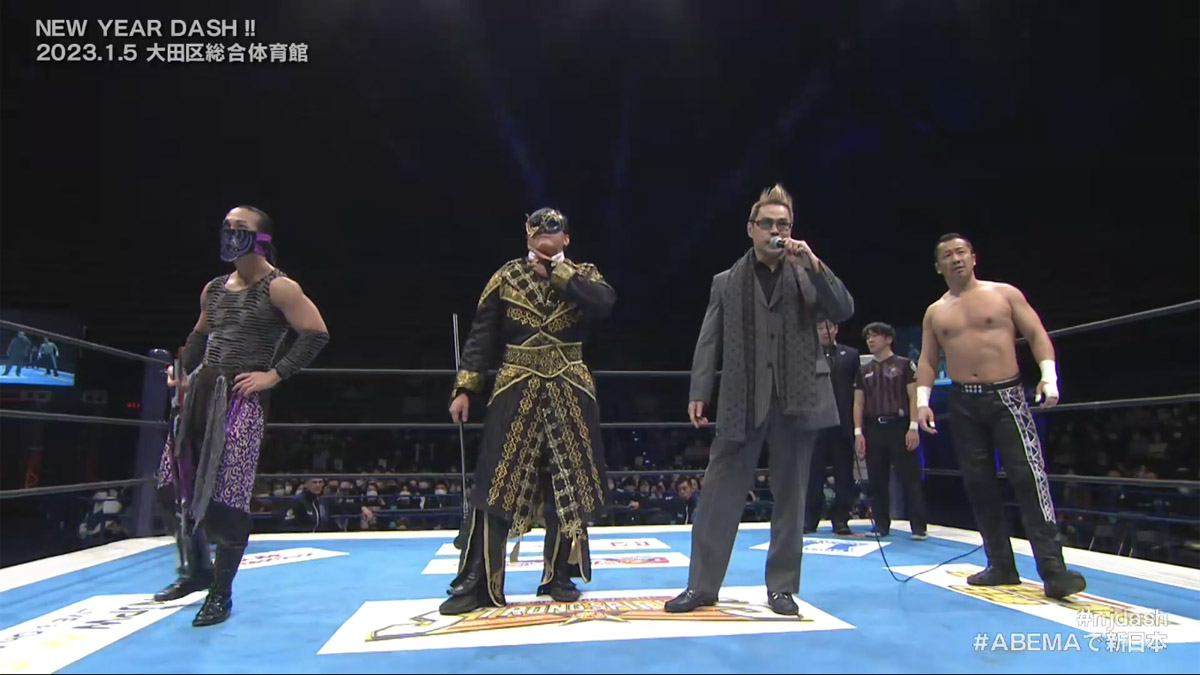 Out of the ashes of Suzuki-gun a new faction forms. Courtesy: NJPW.

Taka Michinoku accompanies the trio to the ring. “We will make big changes to NJPW,” he said of the group in the ring. “There are no bosses here. There are no leaders here. We are Just Four Guys,” says Taka. When it is revealed that Will Ospreay is participating in the match there are gasps in the crowd and big cheers for him. Ospreay has a massive cut on his back from being put through a table by Kenny Omega last night. The officials claim there is unfinished business between Ospreay and Omega. Douki reverses Akira’s Speedfire into a roll-up for the pinfall. Everyone brawls. Taka Michinoku steps into the fray. “What you are going to do about it?” asks Ospreay as he kicks Taka in the “lower abdomen”. Ospreay and Taichi snap on each other. Ospreay claims that Zack Sabre Jr. won’t even talk to Taichi anymore. They start brawling around the ring. The announcers call Ospreay “unhinged”. 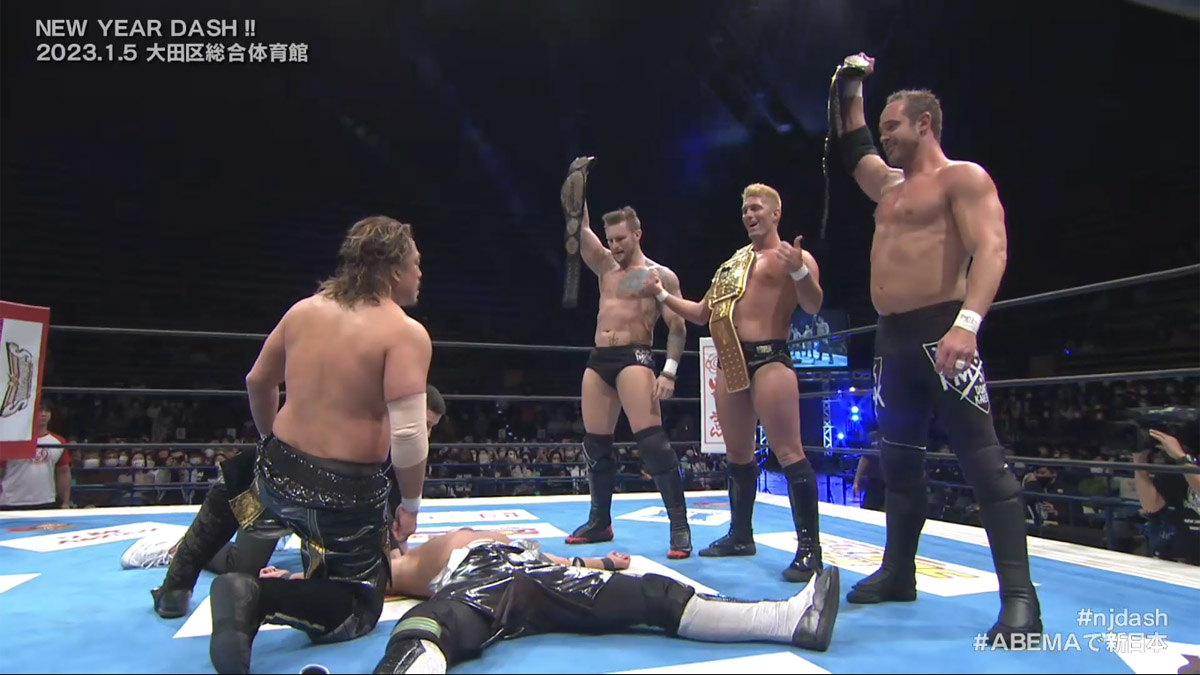 Goto is still suffering an injury from last night’s title win. TMDK exploit that injury whenever they can. TMDK spikes Yoshi with a Tank Buster and pin the champs. To rub the win in, TMDK stand with the IWGP Tag Team Championships over a fallen Hashi and Goto. Ishii steps up to Sabre Jr. and his NJPW World Television Championship. 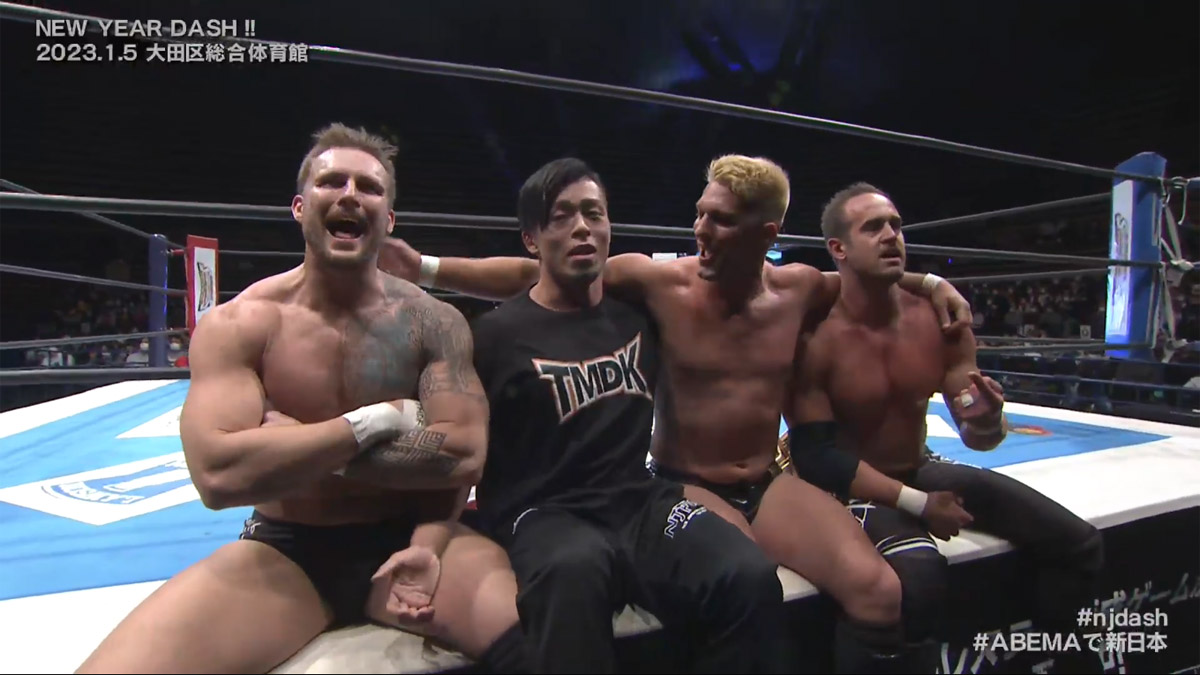 Sabre wonders if TMDK need another member. He brings over Young Lion Kosei Fujita and gives him a TMDK shirt. The announcers complain that Fujita hasn’t even graduated from the NJPW Dojo yet. A confused but thrilled Fujita poses with the others in the ring and leaves with them.

Yoh pins the IWGP Jr. Heavyweight Champion with a Direct Drive. Umino mocks Naito with his own taunt. Naito confronts him. Umino does Naito’s eye-opening taunt right back at him. 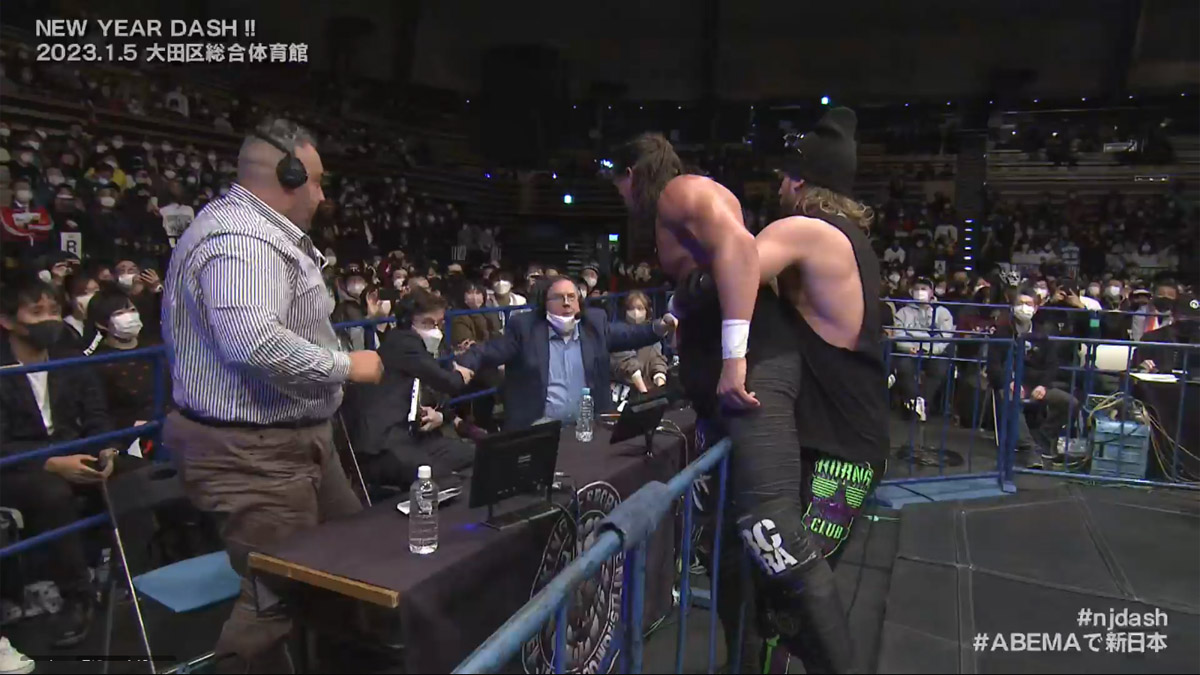 White is not happy. Courtesy: NJPW.

As Bullet Club comes down to the ring White accuses commentator Chris Charlton of laughing at him behind his mask. He lunges at Charlton.

“What did you do, Chris?” asks Gino Gambino.

“I didn’t do anything!” shouts Charlton.

Phantasmo pushes Tama into Hikeleo. He almost pins Tonga. Gedo interferes. Tama blasts him with a Gun Stun. Phantasmo clocks Tama in the head with the NEVER Openweight belt earning a disqualification. 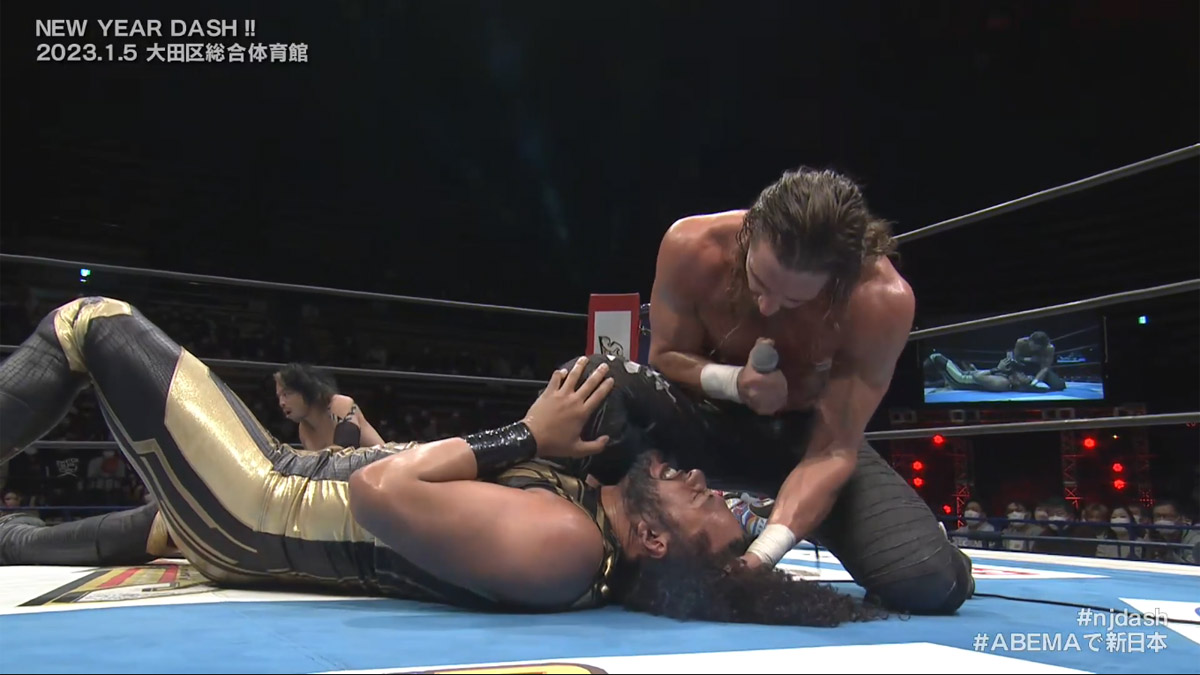 Hikeleo is about to chokeslam Phantasmo and Kenta. White hits him in the back with a steel chair. Hikeleo no-sells it and turns on White. Kenta hits Hikeleo from behind with a low-blow. White wallops Hikeleo about 9 to 10 times with the steel chair.  White addresses Hikeleo on the microphone. White says he will make it his mission that Hikeleo never has his Wrestle Kingdom moment and he will make life in NJPW hell for his entire family.

He demands Hikeleo face him in a Loser Leaves Japan match. White grabs another chair hits Hikeleo some more and drops him with a Bladerunner.

The rest of the House of Torture are outside on the floor. Khan prevents Sho for using his wrench. He gives it to the official. Sho kicks Khan in the “lower abdomen”. Sho uses a steel chair on Yano. Evil and Togo are sat down at the time-keeper’s table. Takagi drives Yujiro into the steel barricade which smashes into the time-keeper’s table knocking Evil and Sho over. Shingo pins Yano with Last of the Dragon. Khan challenges Takagi for a shot at the belt.