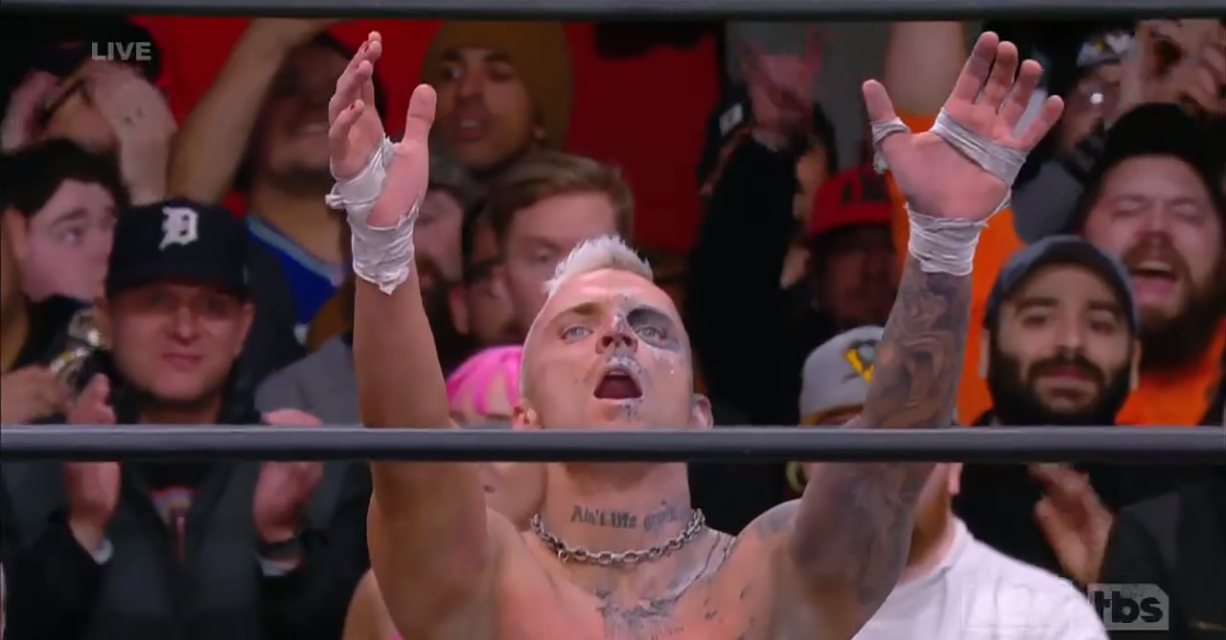 AEW Dynamite kicks off the new year with it’s first show ever in Seattle, Washington. And Dynamite has a new set! New year; new you, Dynamite! Let’s get right to the action.

The Seattle crowd is hot right off the jump. The two men trade slaps, with Starks beating Jericho into the corner. Starks pursues Jericho to the floor, slamming him into the ring steps.  Back in the ring, Starks takes Jericho for a rope walk before hitting a face buster. The two jockey for position on the apron. Jericho with a thumb to the eye and hits Starks with a suplex to the floor.

After a commercial break, Jericho is in completely in control. Starks chops Jericho to the mat. Jericho with elbow strikes. Starks hits a Liger bomb, but can’t get the pin. Jericho goes for the Lionsault, but Starks blocks by getting his knees up. Starks with a thrust kick after missing a moonsault and landing on his feet. Jericho dodges a splash in the corner and lands a Codebreaker. Starks blocks the Juda Effect and looks for the Rochambeau. Jericho counters into the Walls of Jericho and has it locked in deep. Starks tries to pull himself to the ropes. Parker distracts the ref, allowing Menard to smack him in the face with a bat. Jericho drags him back into the middle of the ring, but Starks is able to recover. Starks rolls over and breaks free with an up kick. Ricky hits a DDT and takes out Parker and Menard on the apron. Starks catches Jericho with a spear and covers to get the win.

After the bell, the rest of the Jericho Appreciation Society run down to beat up Starks. With a chair in hand, Action Andretti makes the save and cleans house. Anna Jay distracts him, and Tay Melo hits him with a low blow. The JAS continue the beat down on both men. Jericho clocks Andretti with a chair, while Starks gets power bombed through a table by Jake Hagar.

Tony Schiavone welcomes Hangman Adam Page to the ring. Page tells Tony that he still isn’t medically cleared to compete. And if he gets in a fight tonight, it will set him back one more week. Page says if his latest scan comes back positive he will fight Jon Moxley next week at the Forum. Page is going to knock his blank in the dirt.

That line got Mox’s attention, who makes his way out of the crowd to the ring. Mox is getting sick of the outpouring of support for Adam Page. Mox wrestled for two month with a torn pec. He has crawled through miles and miles of crap and he is sick of Page playing the victim. Page isn’t mad at Moxley for knocking him out, what he is angry about is how Mox called him out and wouldn’t let him get a word in before he cracked a joke. Mox tells Page next time won’t be any different and he will make sure Page doesn’t get back up.

Jarrett walks over a slaps Caster on the apron. Bowens kicks Jarrett into the corner. Lethal tags in, Bowens leap frogs him and hits a guillotine leg drop. Caster with a Samoan drop and taunts Jeff Jarrett. Bowens and Caster team up for Scissor me Timber on Lethal. Jarrett hits the ring and gets the same treatment. The take a moment to scissor with Billy Gunn. Jay Lethal takes a shot at Gunn on the floor. He chases Lethal into the only to get thrown out of the match.

After a commercial break, Lethal applies a rear chin lock to Bowens. Lethal follows with knee strikes and goes up top. Bowens rolls away from the elbow drop, but Jarrett cuts him off from making a tag. Bowens is able to hit a back drop. Caster gets the hot tag. A back drop takes out Lethal, while Double J eats a thrust kick. Caster hits Lethal with a diving cross body, but Jarrett breaks up the pin. Bowens looks to set Lethal up, but Jarrett shoves Caster off the top turnbuckle. Lehtal and Jarrett with a double team and Lethal locks in the Figure Four. Satnam tosses Caster into the ring steps. The ref ejects him from ringside. The entire AEW referee rosters has to run down to get Satnam to comply.

In the ring, Bowens is outnumbered. He counters the Lethal Injection, but Jarrett hits him with a the Stroke. Lethal covers. Bowens gets a foot on the ropes, but the ref doesn’t see it. Dutt shoves the foot off the ropes and the ref counts three. Referee Aubrey Edwards runs in, explains what happened and the match is restarted.

Bowens gets Lethal and Jarrett to collide. Lethal with a roll up and tries to uses the ropes for leverage. Caster shoves his legs, allowing Bowens to reverse the pin. The ref makes the three count.

Britt Baker wants to know if Saraya will ever get what AEW means. Hayter says they are home grown talents, something Saraya will neer get.

Jungle Boy wasn’t sure there was anybody he could count on, but that changed with Hook.

Woods grabs Danielson by the leg, allowing Neese to hit a cheap shot. Neese misses a moonsault but connects on a running knee. Danielson with chops and kicks in the corner. He follows with the running elbow strikes. He delivers the kicks to the chest and ends with the round kick. Neese blocks it and dumps Bryan hard into the corner. Neese misses the running knee. Danielson hits the Psycho Knee and stomps Neese’s head into the mat. Bryan locks in a submission and Neese is out.

After the match, Danielson says he is ready for another fight and calls out AEW Champion MJF. The champ doesn’t care because he gets paid whether he wrestles or not. The two end up insulting each other mothers, but MJF starts to go after wrestling journalists and the marks in the crowd. MJF names drops Disco Inferno, Eric Bischoff and Jim Cornette. Danielson just wants MJF to shut up. Danielson makes a move out of the ring and MJF retreats to the announce desk. The champ tells Bryan he is trying to smarten him up. Danielson has to become the number one contender to get a shot at him. If Bryan wrestles every week on Dynamite until Feb 8th and wins; MJF will give him a title match at Revolution. Danielson doesn’t think so. He’ll just wrestle when he wants, become number one contender, and beat him. MJF vows it’s his way or no way. Bryan agrees but only if he can make the match stipulation at Revolution. MJF agrees. Danielson challenges MJF to an Iron Man match. The champ agrees to the stipulation, because he is confident Bryan won’t make it to him.

The commentary team explains that at one time Fox was a mentor to Swerve. Fox looks to take out Strickland on the apron, but Swerve back flips to the floor. Fox pays back that move flipping off the apron to avoid Swerve. Strickland is immediately backed up by his boys. Fox with a pump kick and vaults off the ring post to wipe out Swerve on the floor. In the ring, Fox hits a corkscrew brain buster. With the ref distracted, Fox gets hit with a cheap shot from the tattoo man.

After a commercial break, Fox hits a discuss lariat and follows with a diving back elbow. Fox wants a cutter, but Swerve counters with a German suplex. Fox with a stutter step kick into the corner and delivers a cutter. AR goes up top, connecting with a 450 splash, but Swerve kicks out. Strickland fights out of a hold on the apron. Parker slips Swerve a foreign object. Strickland hit Fox with it and takes him to the floor with a Death Valley Driver . Swerve delivers the double stomp in the ring and covers to get the ring.

Saraya accuses Britt Baker of trying to gatekeep the AEW women’s division. Saraya says she is sitting next to the wrestler in the world. She asks Toni Storm to be her partner; Hikura Shida doesn’t look pleased with that statement.

The Gunns are in the ring to deliver a eulogy for FTR. Austin says they destroyed a ten year legacy in ten minutes.

FTR’s music hits, but it’s all a prank by the Gunns. They vow FTR will never work in AEW again.

Cargill dominates the match, until tagging in Red Velvet. Hogan takes advantage with a snap suplex. Velvet crashes into her corner, so Jade tags herself in. She chokeslams Hogan and berates Red Velvet, who refuses to tag in. Hogan with a roll up, but can’t get the pin. A pump kick takes out Hogan and Jade covers to get the win.

Jeff Jarrett wants a No Holds Barred match this Friday at Battle of the Belts for the AEW Tag Team Titles.

Samoa Joe goes after Allin’s friend, Nick Wayne, in the front row. Allin with a suicide dive and then cracks Joe with his skateboard as the two fight up the ramp. Darby then stomps the board off his back. He runs to the back to grab a ladder. Allin with a moonsault off the ladder onto Joe. And the bell hasn’t even rung yet to start the match.

They finally get to the ring and bell rings. Joe catches Allin jumping off the apron and spikes him into the ring steps. Joe with a kick to the chest, but misses on the elbow drop. Allin jumps on his back, only to take a back senton. Joe delivers a double knee breaker and follows with a senton. The champ locks in an single leg crab. Allin gets to the ropes to break it up. Joe sets up a Muscle Buster, but Allin slips out. Darby suplexes Joe out of the corner, with Joe holding onto the turnbuckle pad, which flies off. Joe kicks out of the pin and locks in a sleeper. Darby escapes. Joe counters the stunner with a sleeper. Allin breaks free by running Joe into the exposed turnbuckle. Allin with a destroyer and follows with the Coffin Drop. Allin goes up for another and connects. He covers and gets the pin.

After the match, Sting joins Darby Allin in the ring and embraces him. That’s the show; see you in seven!

What a great show to kick off the year for AEW. And that was with the Elite and Death Triangle not even being on the show. The tag team title match and TNT title match were worthy of a PPV. And check out Bryan Danielson going toe-to-toe with MJF on the microphone.