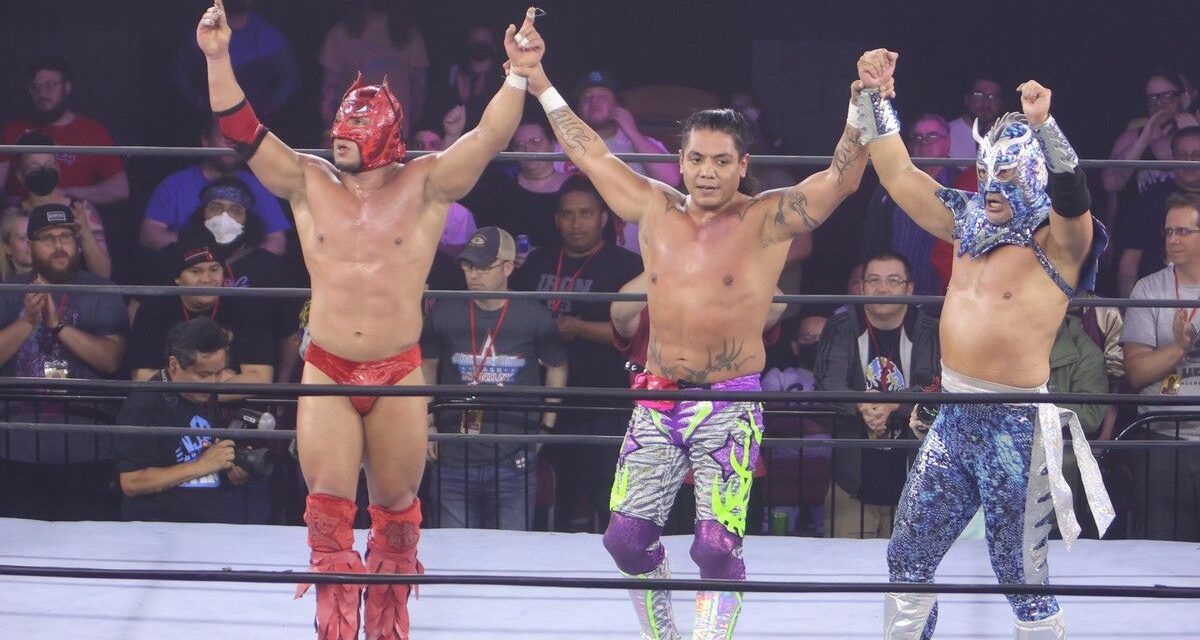 As far as luchadors go, none can match the high-flying antics of Dragon Lee.  The wrestling superstar recently announced at AAA’s pay-per-view that he had accepted an offer with WWE and will bring his aerial acrobatics to NXT.  The buzz on social media for this high-flyer is praising him as the second coming of Rey Mysterio.

You’ll forgive me if I don’t join the fanfare.

Don’t get me wrong.  I think it’s great anytime a wrestler from America’s heartland, Mexico, manages to break into the upper echelons of the Sport of Professional Wrestling, but when it comes to the World Wrestling Entertainment, their treatment of luchadors is somewhat dubious.  The reason being is that for every Mysterio or Tito Santana or Eddie Guerrero, there’s others that just don’t made the grade.

If it pleases the court, allow me to introduce Exhibit “A”, Sin Cara.  The luchador formerly known as Mistico was a big star in Consejo Mundial de Lucha Libre (CMLL) and was brought in with great fanfare in 2011 as the second coming of Mysterio.  But despite a strong start, injuries and a violation of the Wellness Policy (not to mention having a reputation of allegedly botching moves) hampered his progress until he was replaced under the mask by Hunico to become the new Sin Cara.  Since then, he wrestled under the name Caristico (a combo of Sin Cara and Místico) as another in CMLL took up the name in his absence.  But once the other Místico left the promotion he resumed the name, and he has prospered far from a WWE ring, winning multiple titles along the way.

In short, WWE dropped the ball.

This is a pattern WWE has done to other luchadors who have stepped in their squared circle, from Gran Metallik to Lince Dorado to Kalisto to Andrade.  They begin to sizzle (typically in NXT) and then fizzle once called up to the main roster.  Furthermore, they usually get relegated to curtain jerking, used as jobbers, or the rare cruiserweight bout on RAW or Smackdown.

That’s not to say that it’s the fault of the luchadors, per se.  There are several factors that hobble them from the get-go.  The obvious one is the size, because an average luchador is around 5’ 5” to 5’ 10” and compare that to an average WWE wrestler at 6’ 4.”  Only Alberto Del Rio could match up at 6’ 5”, which, to quote my favorite movie Once Upon a Time in Mexico, it’s no record but bigger than most other Mexicans (and we’ll get to Del Rio in a moment).

The other factor is being saddled with poor gimmicks.  Let’s just say WWE under Vinny Mac’s watch has a poor sense of what he thinks is funny and will get over with fans.  Anyone remember the Mexicools, where Juventud Guerrera, Psychosis, and Super Crazzy came into the ring riding a lawn mower and dressed like groundskeepers?

I have a hard enough time getting my friends to like pro-wrestling, and it’s stuff like this that makes me and everyone left of huevos rancheros want to rush out and beat some sense into the booking crew with a chancla (ask your neighborhood vieja what that is, and then duck and cover).

The biggest obstacle for luchadors coming into WWE is the command of the English language.  Most of WWE is promo-driven, so being able to speak on the mic is an important skill and for some, unlike Mysterio or Del Río or Guerrero, it is hard to process the same feeling, much less in a second language.  Not knowing the dialect can prevent fans from getting behind the character or any angle they might be used.

That being said, the 27-year-old Lee does have a lot of upsides, starting with his aerial moves that can entice fans of the WWE, and he has held a number of titles over the years in AAA, New Japan, or Ring of Honor.  Also, NXT is a good place to start so that Lee can learn at a reasonable pace how to work within the WWE-style of wrestling.  It’s also been reported that he is learning English, but it might help if he has someone like a Zelina Vega speak for him (assuming he goes into a heel character down the road.  However, all signs point to Lee entering as a face).  His size may be a problem, as his height is currently billed at 5’ 7”, but if he can work with other wrestlers who have a similar fast-paced style then there is a chance he can get over.  Plus, Triple H as head of creative is more open-minded in getting guys like Kalisto and Andrade over when he still worked for NXT, and now that he’s taken over creative, he might have a better shot.

Hey, at least there’s no groundskeeping gimmicks with him.

Just as important, Lee needs to remain drama-free, because having an inflated sense of ego can insure there won’t be a place for him on the roster.  It’s the reason why Del Rio is no longer on the WWE roster, as well as to an extent Andrade.  However, it should be noted that Del Rio’s problems (whether justified in some cases or not) were issues he brought upon himself.  Andrade, on the other hand, had a hot push in NXT but his talents became underutilized once he got called up to the main roster.  Feeling he was better than this booking, El Idolo went elsewhere to seek a better push (although, it appears, the grass is not always greener in All Elite.  But that is a story for another time).

Will Lee roar out of the gate like a dragon in WWE and sustain the momentum, or is he doomed to become nothing more than a gecko with 15 minutes of fame that wouldn’t be enough to save 15% on car insurance?  That is the mystery, but one thing that will help him is for all wrestling fans to do this:

Stop comparing him to Mysterio.

Mysterio is a one-of-a-kind luchador who has transcended what lucha libre is and its future potential, and there will be another like him.  Same thing with Eddie Guerrero, and he could turn any gimmick to his advantage.  It drives me nuts any time some wrestler that is Black, LatinX, Polynesian, etc. that gets compared to another wrestler of the same demographic is told to “Be Like Them.” To compare Lee to Mysterio or Guerrero or Santana is just setting up impossible expectations.  It’s one thing for Lee to stand on the shoulders of those lucha giants, but to succeed he need to soar as his own person on his own dragon wings.

That’s what got him to WWE, and there’s no mystery to that.