Closing out 2022 with an NWA SuperPOWERRR show 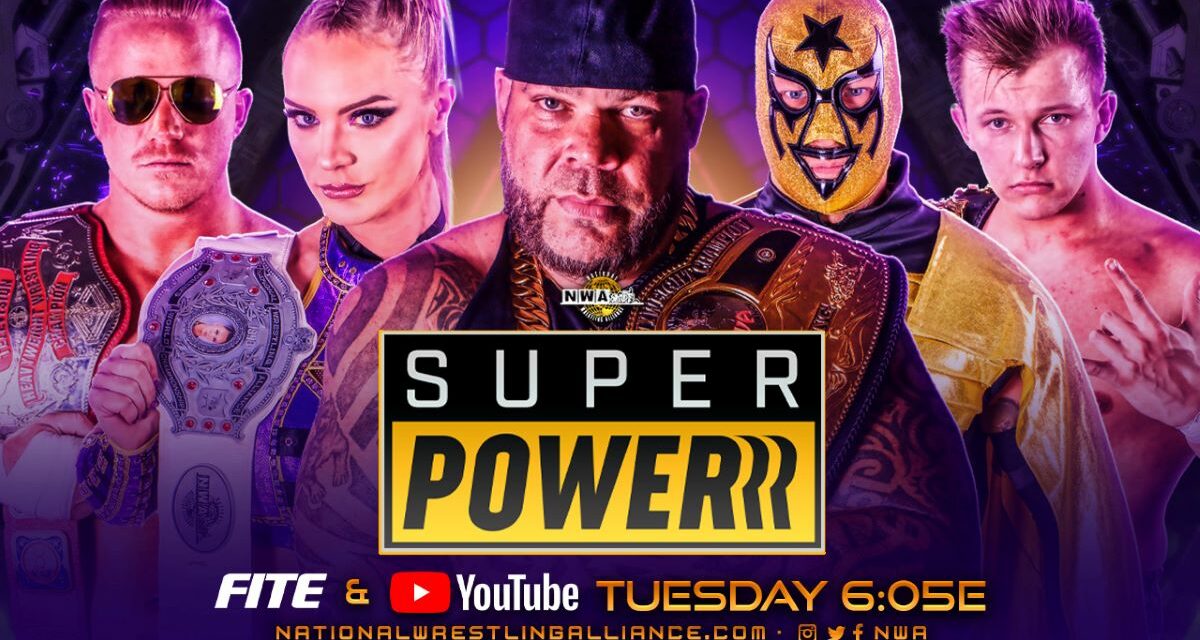 The National Wrestling Alliance is closing out 2022 with a huge episode that one can say is SuperPOWERRR-ed.  So as we take a pause from The Champions Series we get a host of matches with some up-and-comers, along with a huge six-man tag team featuring members of IdolMania Sports Managements against La Rebelion and Joe Alonzo.

We GOP to the Skyway Studios in Nashville, TN. Joe Galli and Velvet Sky have the call, and we go straight to the First Match of the Night, and it’s for the… 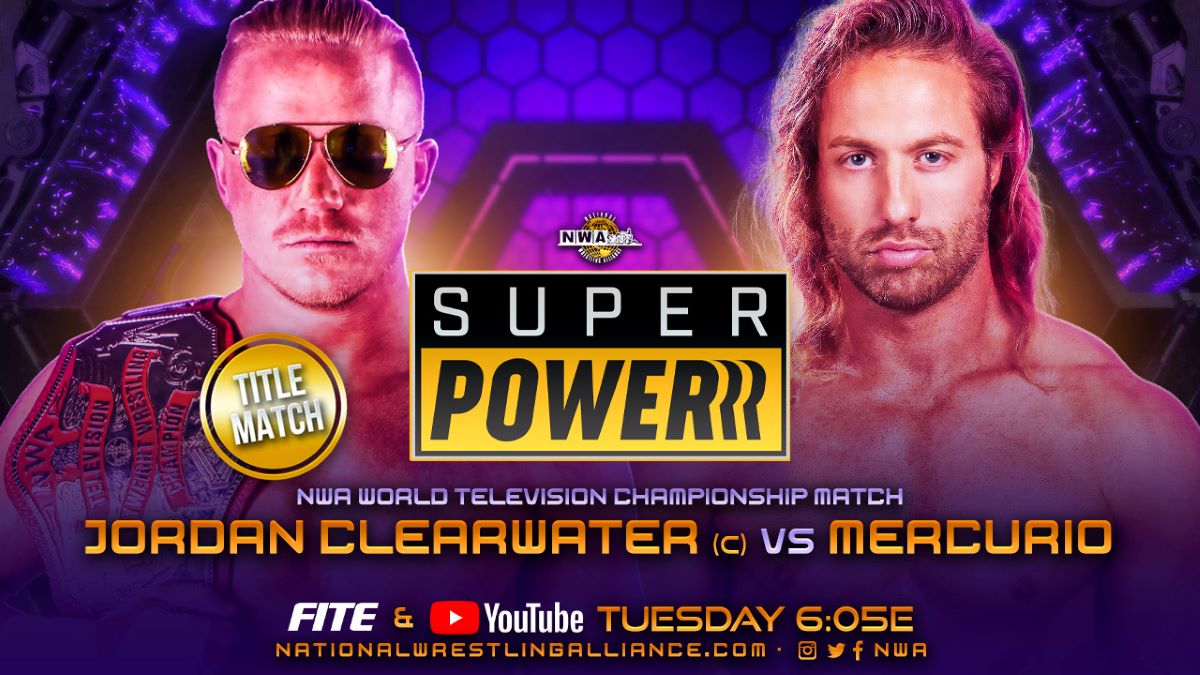 If it’s been a while, keep in mind that the title is contested under a 6:05-minute time limit.  If the champ defends successfully, he will have a chance to cash in a shot for the NWA Heavyweight title (which is what Tyrus utilized to get the belt), and this is the first title defense by The Golden Boy.

As the match gets underway, Clearwater talks trash to get in Mercurio’s head and wastes time off the clock.  He pops Mercurio in the mouth, but then he fires back at Clearwater for hitting his moneymaker.  At the 4:30 mark, Mercurio goes for a crossbody but gets caught.   He tries to get the model on his shoulder, but Mercurio wriggles out and nails a clothesline to the back of Clearwater’s head. Then he hits a knee shot and covers for a two count at 4:11.  Mercurio keeps on offense and pummels away, landing another high knee at 3:41, and swivels his hips at The Golden Boy to show him how it’s done.  Clearwater fires back with a clothesline and back body drop suplex and covers for two at the 3:05 mark.  Mercurio lands with a superkick and a twisting backbreaker at 2:10 and then goes for the Lost Love (Unprettier) finisher, but Clearwater gets out of the hold.   Mercurio goes back, and Idol distracts him enough for Clearwater to deliver Midas Touch as he covers to retain.

We’re gonna keep going with a tag team match between… 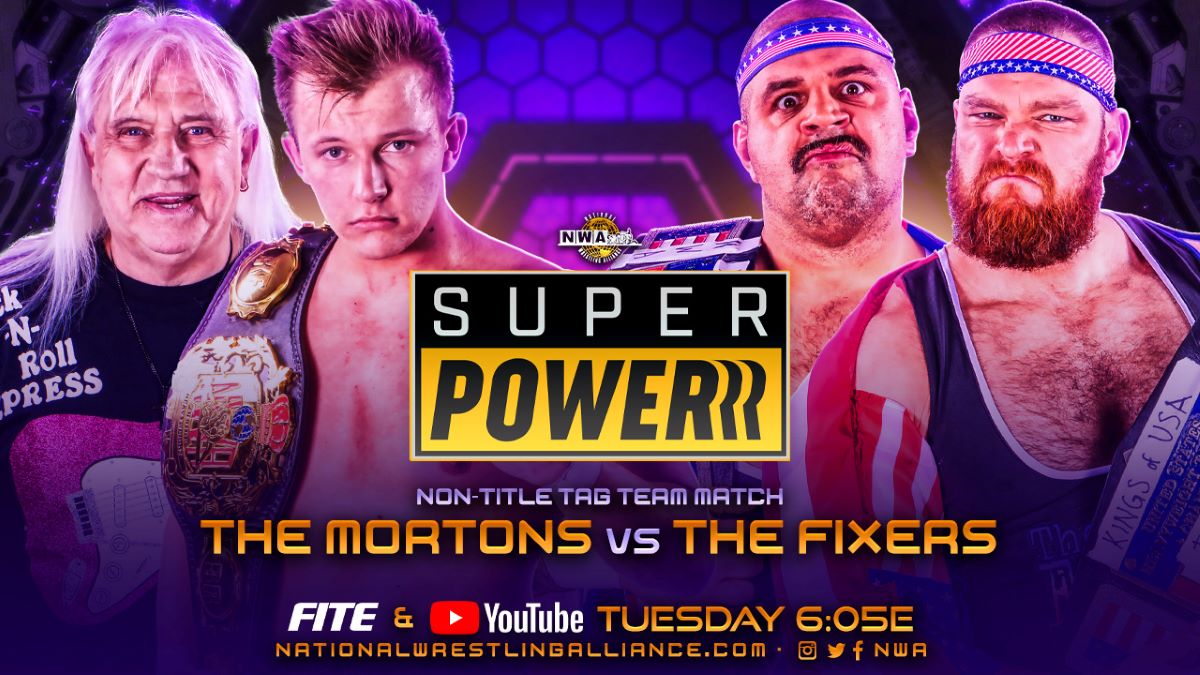 The Fixers (Jay Bradley and Wrecking Ball Legursky) vs. Kerry and Ricky Morton

It’s the return of the feud between both teams in this is tag team exhibition match as The Mortons square off again with the current US Tag Team Champions.  Bradley is still looking for a sign of respect to bury the hatchet, but Ricky has been around the block and he ain’t having it.

Bradley is able to overcome Ricky early in the match but he still has that veteran savvy to avoid most of the damage.  A tag to Kerry and Bradley manages to slam him down but misses a knee drop.  Kerry manages a head scissors takedown, but it’s not enough to put The Boss down.  Tag to Legursky and Kerry dropkicks the big man to no effect.  Legursky sends him over the top rope, but he lands on his feet. As Legursky celebrates, Bradley tells him to get his head back in the game as Kerry launches with a crossbody.  He gets caught and The Fixers sandwich The Future Legend, and Kerry is a Legend in Peril from that point on.  He tries an inside cradle but Bradley is too strong and he reverses to a suplex, and Legursky follows up with a diving headbutt for a two count.  Kerry fights back and goes for a sunset flip. Legursky goes for a sitdown splash and misses the mark.  Kerry gets the hot tag and Ricky is a Rocking and Rolling in the ring, but soon The Fixers nail him with a double tackle.  Bardley sends Ricky to the corner, and whips Legursky to follow up, but he dodges the Wrecking Ball and while he was stunned, Ricky comes from behind with a rollup for the pin and the win.

Your Winners via Pinfall:  The Mortons

Time now for Triple Threat between… 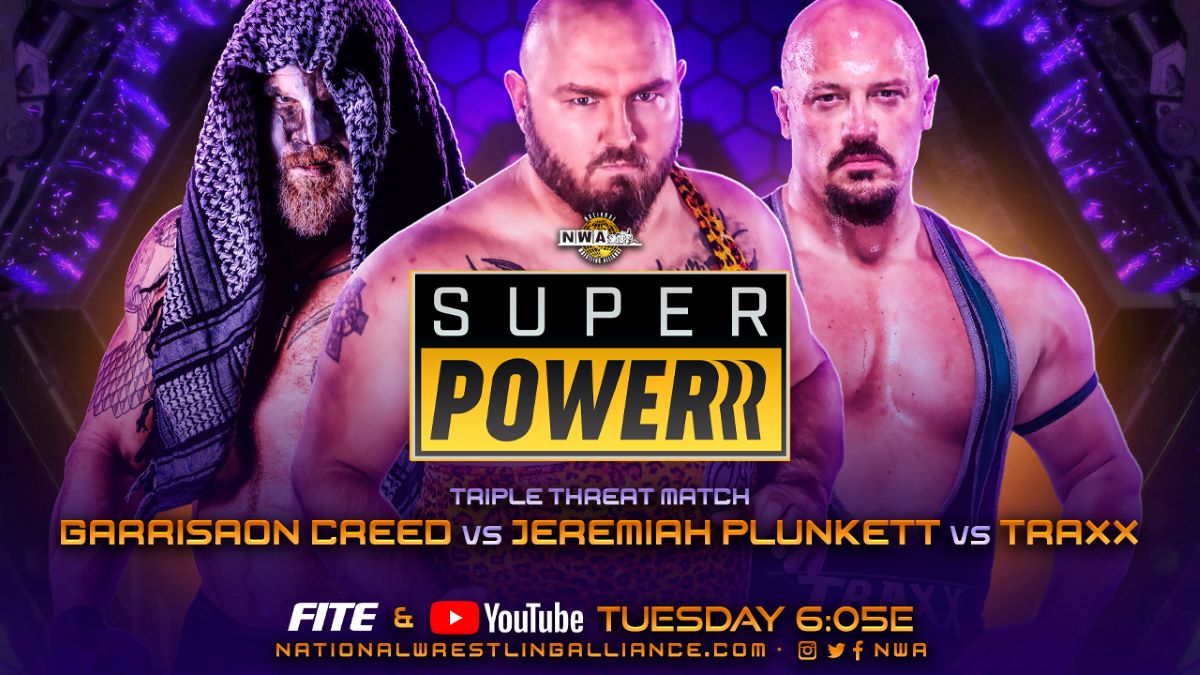 Traxx vs. Garrisaon Creed vs. Jeremiah Plunkett (with Danny Dealz)

Galli informs us that Creed recently had bicep surgery and this is the first time he’s been back since his debut on Velvet After Dark.  Traxx is trying to get some steam under his wheels (and again I make the train puns).

Creed tackles Plunkett, and then Traxx starts to derail everyone in the ring (I swear, the puns write themselves).  Creed and Plunkett team up briefly, but Traxx gets a flying shoulder tackle and he is looking strong in this matchup.  Creed pops Traxx and then he rolls out of the ring, and he beats down Plunkett with an axehandle smash splash to cover for two.  He chops away at the Tater Peeler, but he comes back with a spinebuster to cover for just a one count.  He turns around to face Traxx, who rams Plunkett’s head into the turnbuckles and then follows up with knee strikes. A splash gets two for Traxx, and now Creed is back, and he suplexes him.  Once again Plunkett suggests he and Creed team up.  Creed holds Traxx as Plunkett winds up for the pitch, but Traxx gets out of the way and pops Creed.  By Accident.  Plunkett goes back to hold down Traxx, and Creed winds back, but the same result takes place.  Traxx is a human locomotive as he takes both men and nails running tackles, followed by a powerslam to Plunkett, but he only gets a two count.  Creed comes back with a knee to the side of the head, and Plunkett attacks with a leaping high knee and a Saito suplex to Creed, followed by a piledriver.  Traxx tries to get in the ring to break the count, but Dealz grabs his legs as Plunkett gets the three count.

Your Winner via Pinfall:  Jeremiah Plunkett 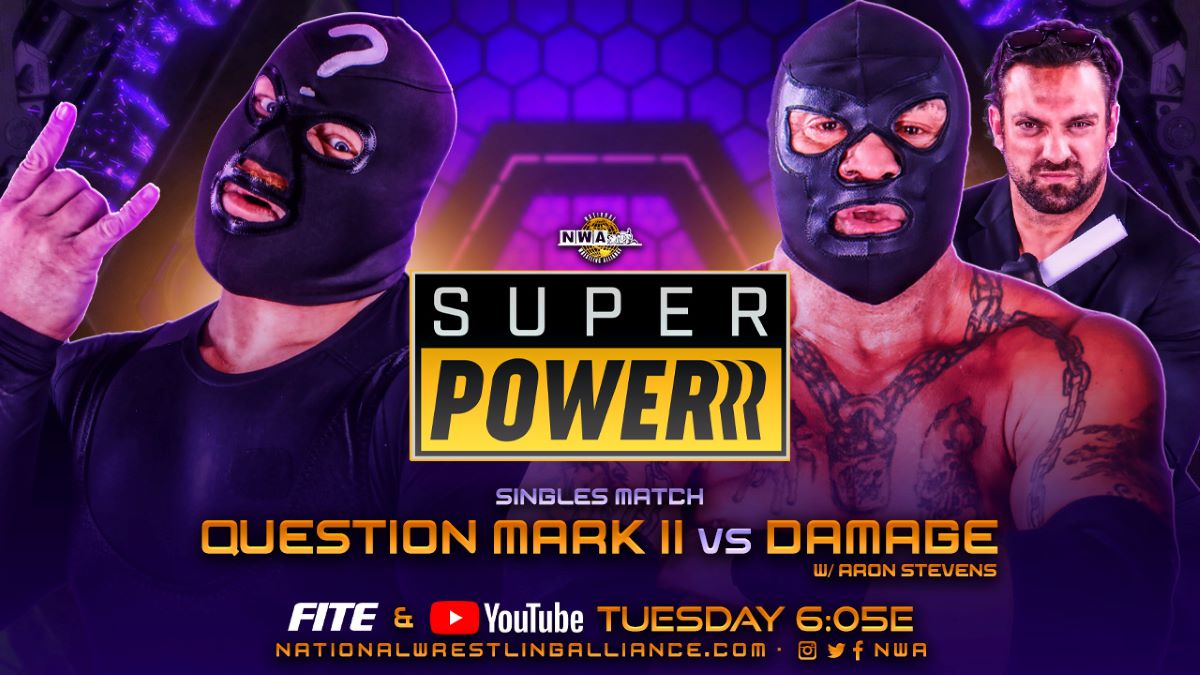 The Question Mark II vs. Damage (with Aron Stevens)

`Stevens is pacing at ringside, clearly unhappy that the fans are chanting “Two” for the Mongrovian in the ring.  As he stares down at Stevens,  Damage attacks from behind and just goes to work on Mark.  The match is heavily in favor of one-half of Blunt Force Trauma, as he nails a flying shoulder tackle in the corner to Mark.  He tries to fight back but has no such luck in this one-sided affair.   Stevens tries to interfere with his loaded glove but the ref keeps a close eye on his shenanigans.  Now Mark finally gets an opening and lands a Mongrovian side kick, and preps for the spike but Stevens gets on the ring apron and clocks him with the loaded glove and Damage covers for the tainted victory.

Your Winner via Pinfall:  Damage

Next up is a non-title match, but pride is on the line between… 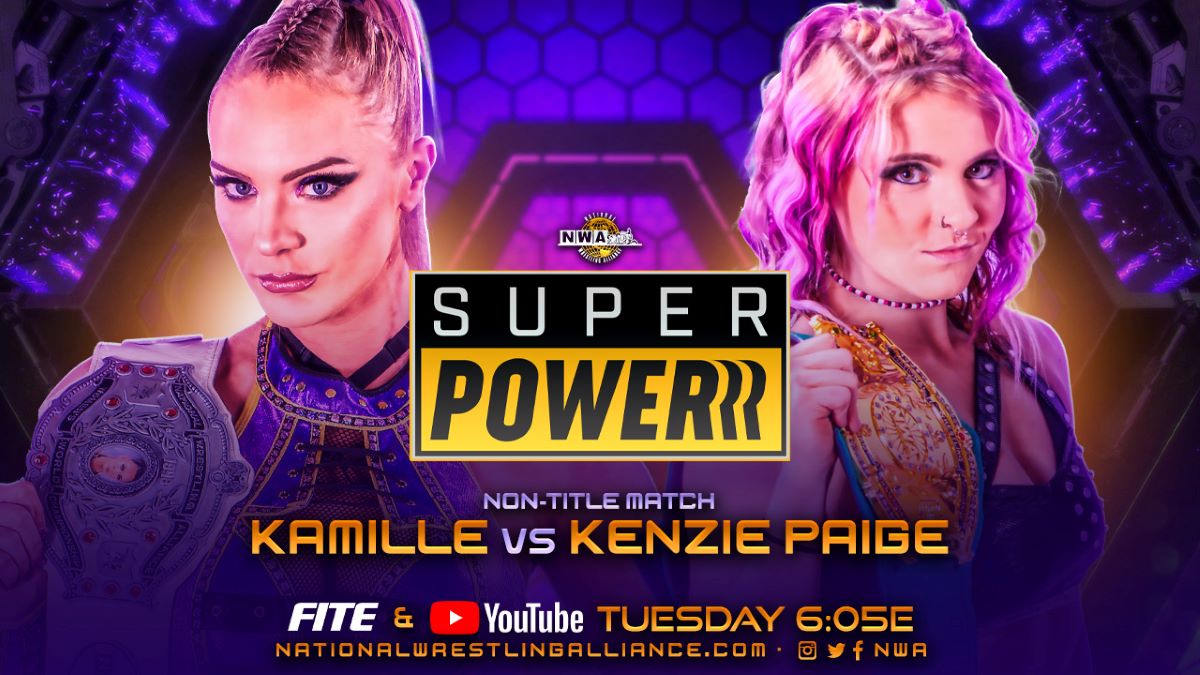 Both Women have faced off in the past, but now Paige has a mean streak as one-half of the NWA Women’s Tag Team Championship.  She tries to get in her head and Kamille is not feeling it.  It’s not long before the NWA Women’s champion gets Paige with a side headlock that keeps the Pretty Empowered one down, and she ragdolls Paige across the ring, followed by a whip hard into the turnbuckles.  Kamille slams to cover for a one count, and Paige rolls out to catch her breath. Kamille tries to grab her but Paige stun guns the arm, and now focuses on that target for the majority of the match, working on the shoulder/arm of The a Brickhouse.  Paige wraps it around the steel ring post at one point, but can’t quite put her away.

Kamille fights back and manages to get Paige with an Oklahoma Stampede for two, and then covers for two.  She also gets Paige in a torture rack and then smoothly transitions to a Blue Thunder bomb to cover, but it’s another two count.  She sets up for a spear, and as she goes for the kill Paige lands with a knee and then locks in a crossface to the stunned champ.  Kamille is in pain but she manages to reach for the ropes to break the hold.  She goes back on offense and utilizing her one good arm nails Paige with a Samoan drop to cover for another two count.  Kamille goes for a full nelson and then transitions to a sleeper hold,  and Ella Envy gets on the apron to protest to the ref on behalf of her bestie.  Envy climbs in screaming at the top of her lungs going into full Karen Mode.  Finally, the ref has had enough and calls for the bell.

Your Winner via Disqualification:  Kamille

Kamille is not happy with the decision as she protests to the ref.  Meanwhile Pretty Empowered go for a double team, and Kamille ducks and then comes back and cuts both women down with a double spear to the delight of the crowd. 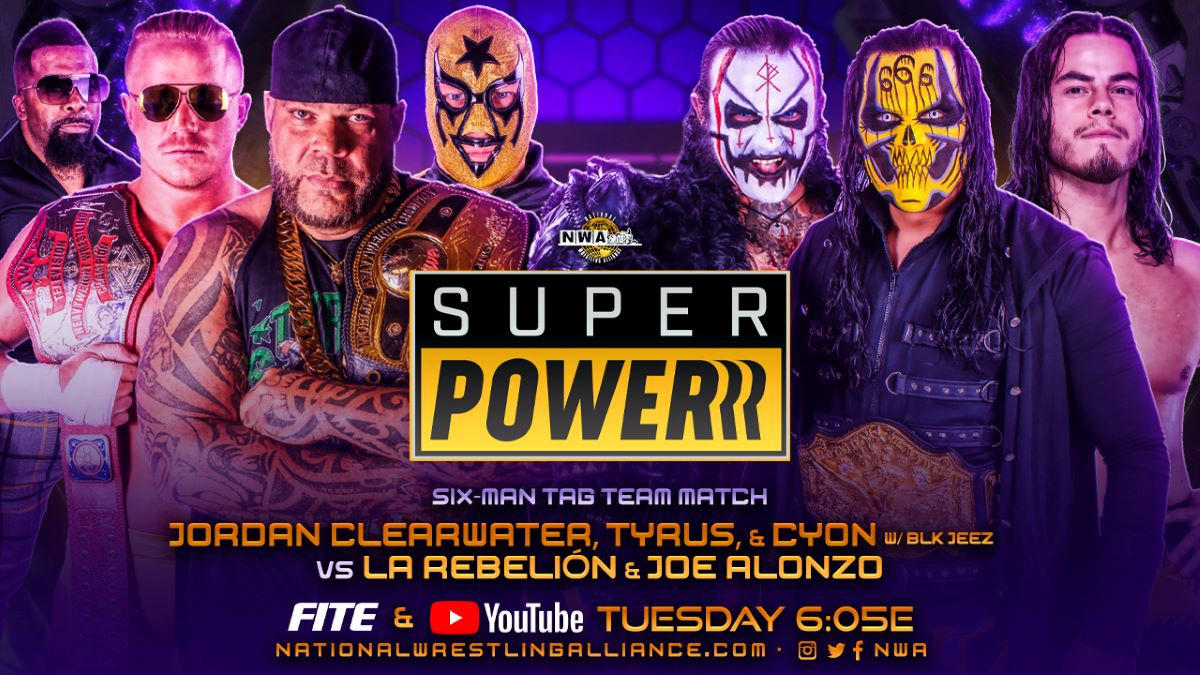 Joe Alonzo and La Rebelión (Bestia 666 and MechaWolf) vs. Jordan Clearwater, The Great Cyon, and Tyrus (with BLK Jeez)

Alonzo comes out with face paint similar to La Rebelion, but the attention in this six-man matchup is on the three titleholders from IdolMania Sports Management, in conjunction with The Church’s Money, Enterprises.

Bestia and Cyon start and it is fast-paced with the Tijuana Gremlin getting the better of The Great One, who’s clearly frustrated.  Tag to ‘Wolf with an axe handle smash to Cyon’s arm, and they double team the NWA National Champion.  Wolf sends him to his corner and gestures that he wants Tyrus.  The champ obliges, and Wolf gets prepared…but Alonzo tags himself in. The young upstart feels he can handle this, but as soon as he is face to face with Tyrus, he tries a tag back but La Rebelion hop off the mat and let him fend for himself.

In short, there are no takebacks in life or in pro wrestling.

Tyrus launches Alonzo with a fallaway slam from halfway across the ring and he isolated in IdolMania corner, with each man taking turns teaching respect to the cocky upstart.  Alonzo fights back, and he lands a desperation superkick to Clearwater. A hot tag to ‘Wolf, and he is a Rebelion en Fuego.  Now La Rebelión double team and they get ready to set up Clearwater for Mark of the Beast, but Alonzo tags himself back in, clearly not learning his lesson.  As both tag champs look at Alonzo like he lost his marbles, he doesn’t realize Tyrus is tagged in.  La Rebelion sees this and let Alonzo have his way, and he runs right into the Tongan Death Grip.  Then Tyrus finishes him off with a choke slam and gets a one-handed cover for the one, two, and three.

Your Winner via Pinfall:  Jordan Clearwater, The Great Cyon, and Tyrus

IdolMania is still on top of the mountain as all three men celebrate their victory as the show goes to the credits.

Just bell-to-bell action and nothing makes me happier.  I am becoming more impressed with Alonzo, as well as Traxx and Creed’s offerings in the ring.  Paige is another favorite who continues to grow with each match, especially with another go at Kamille.  Definitely, a nice way to close out 2022 for the NWA and here’s hoping for more in 2023.